Well, I'm still here. I've taken off a few days due to some diversions that took precedent. Somewhere in there was a funeral, a haircut, some rejection, emotional volatility, and a lackluster attempt to drown my sorrows in tamales. Turns out, that's really hard to do, since the tamales were a little dry.

How do I do this again? Well, I ate some stuff I'm not terribly proud of having eaten, but I did do pretty well on portions. And the centerpiece of my week--possibly overall, which is a different kind of sad--was the salad I discovered here in the office. Roasted pumpkin seeds and salmon headlined this one, with some kind of exotic olive slices singing backup. I could have eaten that every day this week if it were an option. Instead, on famed 7-11 day, I drank of the dark and twisted witch brew that supposedly was a Slurpee flavored to taste of Cap'n Crunch. It was a sickly dark teal color, and I wasn't a fan. I didn't even get to chase it with a hot dog or anything else. What a waste of a friendly promo from my chain-bodega of choice.

The gym has been an unexpected haven for me and my anxiety in recent months, but when my headphones died on me early this week, I got to discover how impossible it is to read an ebook while skirting a heart attack. I tried to find something I could watch without the sound, and it just didn't work the way I needed it to. I'm somewhat bereft as it is, but I've been feeling every tiny defeat as a much larger one. Dead headphones. Lost bluetooth earpiece. Dropped egg on the floor. These are small, tangible losses that I was lumping together with the big intangibles that weigh me down on a regular basis. I just feel like I'm losing at every turn.

Hope remains. I have my new personal project, and a promising opportunity to spend more time stressing and worrying and working and trying. I'm looking into getting a second job, which just might lead me down a path to being so damn exhausted that I don't have time to be depressed when things don't work out the way I want. I don't know. Things seem bleak. But I'm here and there's a strong possibility that I might be staying here for a while. I'm trying to make it sound as chipper as I can. 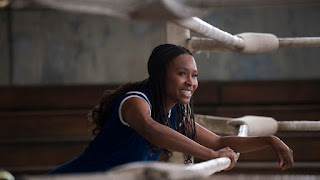 The second episode of this 1980s setting takes on a kind of Breakfast Club quality, with the parking lot acting as a framing device and the abusive authority figure absconding for a large chunk of the day. There's even a makeup-encrusted "weird girl" stirring things up.

Cherry taking the lead training the GLOW ladies, and getting rid of the pro wrestler dude was a smart way to shave down the long list of characters and give her something of an arc as the reliable pro among these confused newbies. No doubt about it, this show is an ensemble show that does not necessarily need to hang its hat on Ruth. Almost to shout that idea from the rooftops, the episode presents Ruth from a comparison with new named character Melrose, who is...awful. The longer the two interact, the quicker Ruth will come down from her "real actor" high horse and Melrose will hopefully become less of a reprehensible misanthrope. It's pretty funny that in the same episode that Ruth is cast as the cartoonish villain in the wrestling show, we are introduced to Melrose who will act as the cartoonishly evil off-stage adversary type.

It works, because Debbie can't really be seen as a villain for merely being more successful than her friend who decided to have sex with Debbie's husband. And the show needs a central conflict that doesn't stem from Sam's ability to be a disgusting, miserable pig. But luckily the Debbie/Ruth grudge isn't shrugged off, but deepened with a look at Debbie's depressed home situation. Another relationship that is instantly complicated is the casual camaraderie between Sam and Cherry. The director's deflections from her concern over his prodigious cocaine use steer into pure cruelty when he brings up her recent miscarriage, and the trajectory from this exchange all the way to the parking lot at the end of the day spreads to almost every plot line.

The resulting "miscarriage skit" that evolves out of Melrose being a complete asshole and Sam immediately doubling down on being King Asshole is a rough couple of minutes. Cherry looks like she's ready to snap someone's neck, Ruth is absolutely catatonic, and Debbie is all vengeful glee. Setting aside how monstrous Sam is for turning miscarriage into a cheap wrestling narrative and how it must affect a room full of women to have the one man in charge of everything trivialize that, it also just royally sucks that when confronted with Melrose and her bullshit antics, he chooses to reward her for it instead of blithely booting her the way he has dozens of other auditioning hopefuls. I'm not sure I can handle this kind of cringe content unless the tension gets released a little more often.

But from the perspective of a wrestling aficionado, it's all pretty interesting. Pro wrestling, to me at least, has always shared storytelling aspects with three major influences: comic book superheroes, soap operas, and children's theater. Sam's method of crafting the ultimate villain out of Ruth's new reputation within the cast as the "home wrecker," and then combining it with Melrose and her willingness to manipulate Cherry's pain with a few flops to the mat and a ketchup bottle...it has the over-the-top excess and "Boo, hiss!" audience engagement of all three. And to Sam's great delight, he didn't really have to do jack shit.

Looking ahead, GLOW is going to be an unbelievably hostile work environment even before the ladies start tossing and pile-driving each other. Cherry is offered double her salary to act as trainer and performer, and after the unhinged lack of professionalism from Sam, she's reluctant to take the sweetened offer. As any sane person would be. Meanwhile Ruth now has to come to terms with working in Debbie's shadow as the dastardly heel character. I think it's a potentially funny turn for Alison Brie's naturally demure mannerisms to make her a wrestling villain, but for right now it's just another heaping dose of rejection in her character's eyes. Even in this shit-show, she can't be the leading lady because her more successful friend showed up and stole her thunder.

-Ruth's idea of a parlor trick is to reenact Audrey Hepburn's Oscar speech. Which is...something.

-"Who doesn't trust a man with a mustache full of coke?"

-"You know, Gene Kelly had the flu when he did the title number to Singing in the Rain."
"Ugh, that's right. He did."