Here's a new one on the "Kyle's Volatile Emotional Health" tour: rage! Or, more accurately, impotent anger that I have a tendency to swallow...along with a lot of pizzas.

Last week's depression is this week's aggression, I guess. I'm a little tired thanks to the local temperatures ranging somewhere near the surface of the sun. Our whole family has had to camp out in the living room, so the last few nights have involved epic strains in my neck and multiple toddler-kicks to the ribs. It doesn't do wonders for a person's motivation or their mood.

On the plus side, getting angry does help with weight lifting. I have been doing five sets of whichever lift the day demands, at some laughably low capacities. Today, I somehow pushed a little harder and made it through a sixth set of ten reps. Because I was good and pissed about a few of the things that had me floating into despair a little while ago, it was hard to focus it on anything except what I lost or how I reacted poorly to it. I didn't have a face in front of me to rage at, though there might have been a logo or abstract representation of something. Anyway, I pushed a hundred and twenty pounds at it as hard as I could, like sixty times.

As far as food goes, there was a spaghetti squash  that I experimented with. I'd call it a mixed success. I'm on a real kick with unfamiliar vegetables. Collard greens are delicious,  brussel sprouts are...fine. Radishes are staying on my preferred menu for a while now, too. How. Exciting.

So, as the man says, strikes and gutters. Ups and downs. 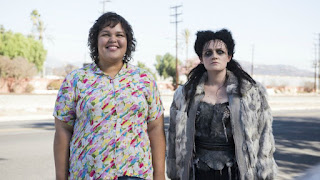 This is, honest to goodness, the first episode of this show that had me for every moment. "GLOW" got off to a slow start for me, but it turns out that those first three episodes were just incredibly low-key ground work so that I would be invested enough for this extended slumber party to land properly. This is turning out to be incredibly strong character writing.

In lieu of the show introducing a new character out of left field, we get a sort sequestration episode in the Dusty Spur motel. While the cynical television-soaked part of my brain calls this plot out for being a little too artificial in its construction, the other part of my brain that likes to enjoy things finds it pretty funny that the show's writers cover this conceit by having it be the big creative conclusion to Sam and Bash spending a weekend locked in a hotel doing rails of coke. How nihilistic and yet somehow light. And I'm willing to admit that regardless of the way in which all the GLOW ladies become "roommates and sorority sisters," it kicked the relationships between all the characters into high gear, and that's one of the shining aspects of shows like "Orange is the New Black," whose blueprints undeniably resemble those of "GLOW."

Bunking Ruth with Sheila the She-Wolf is sort of perfect for the crisis of character the former is having, and one wonders if Sam and Bash are smart enough to have done that on purpose. I doubt it, but the writers sure have my thanks for it. Sheila opening up and trying to voice her identity to Ruth is a scene that shouldn't work with so little build-up, but it manages to become the most arresting scene of the entire series up to this point thanks to Gayle Rankin's performance, and the amount of truth to a simple line of dialogue, referring to her feral getup: "This isn't for you. It's for me." I feel like that could help explain so much to people I've encountered over the years who seem mystified, irritated, and bizarrely invested when confronted by someone in the wild not conforming to their standards of normalcy.

Equally crafty is the bait-and-switch of Sam giving Debbie preferential treatment regarding the motel-camp, only for her to use it as way to serve her husband his just desserts and move out when he tries to passive-aggressively slide back into their house. I knew, because I think I have a good grasp on Debbie, that she would be disheartened by the motel's shabby state. But the moment by the pool, with Ruth curled up on a deck chair for lack of having her own identity and place within GLOW, suggests that Debbie might finally let some of her anger go in place of solidarity.

Thank goodness we finally get to some wrestling and persona development. And along with it, we get some real character development, especially for Carmen when her family invades the gym. Somehow this sequence gets uncomfortably real and also thankfully absurd with Bash trying to fake a relationship with Carmen to please her overbearing father. It's nice to see the somewhat buffoonish producer reach out and sympathize with impossible expectations from a cold parent. Sam's unexpected gumption in standing toe-to-toe with Carmen's father, Goliath Jackson, is also quite telling. Maybe underneath all that cocaine and snark is a person after all, I thought.

And then, later, I typed OH SHIT, SAM MADE A DATING SERVICE VIDEO. Sure, he's a sexist prick, but man. He's human. Even if his best earnest pitch to anyone willing to date him is "I'm lonely and my cock works great." I can only assume that Sam forgot that he taped over the copy of Blood Disco that he loaned out to the ladies, but it's also possible this was a quite twisted way of him opening up emotionally and crying for help. At very least, showing his schlock horror films off--which, I'm more than willing to say I'd probably find interesting to watch--is a very quiet request from the troubled director for validation. He's most certainly human. We all are. I mean, Sheila identifies as a wolf, spiritually, but you get what I mean.

-Music Selections:
"Life in a Northern Town" by Dream Academy
"Moving Out" by Billy Joel

-How in the hell can a place be called the Dusty Spur and not have a horseshoe-shaped pool?

-So, I genuinely did not catch that "Fortune Cookie" is none other than Ellen Wong, who stole so many scenes as Knives Chau in Scott Pilgrim Vs. The World

-"Cherry's taking a shower. Supposedly there's no hot water here in the morning...because fourteen women are living in this shitty, rundown motel."