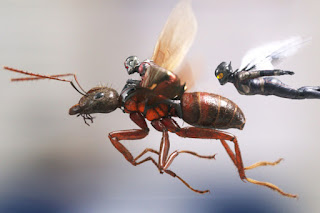 Some comic book characters just don't translate to the modern action blockbuster. Plastic-Man would be, let's say, prohibitively difficult to pull off. The Question is a very interesting character in the right hands, but it would be pretty hard to take seriously with the accompanying aesthetic. And though Green Lantern is one of the marquee characters of the DC universe, Warner Bros. has been reluctant to give him another try since 2011's expensive boondoggle, specifically because it's just too difficult to render his intergalactic setting and tell his story without it becoming garish and nonsensical. So, when I maintain that Peyton Reed struck gold with 2015's Ant-Man, I mean it. That film walked the tightrope of fitting within the MCU formula perfectly while also adding a necessary amount of rakish, self-aware commentary on the absurd nature of the character's powers and the film's seeming disconnection from the meta-franchise's overarching story.

After the heavy, complex places Black Panther and Infinity War went, this was just the right time for Marvel Studios to make a straight-up comedy with some inspired action sequences, rather than a standard issue action blockbuster drenched in an overpowering comedy topping. Chief among this sequel's successes is Reed's instinct to showcase the entire ensemble rather than anchoring the film to Paul Rudd's reformed criminal-turned-superhero. Rudd is fantastic here, deftly combining his chiseled good looks, goofball lack of inhibition, and nice guy charm. But when the Ant-Man films really shine is during the somewhat improvised banter between the "Antourage" of Michael Peña, David Dastmalchian, and T.I. Harris. Or the unconventional family dynamics that Rudd has with Evangeline Lilly and Michael Douglas as Hope and Hank Pym. Now the film gets an added boost of Randall Park as the squeaky clean FBI agent trying to catch the gang doing something nefarious, as well as Walton Goggins giving a proper goof on the soft-spoken, loquacious criminal kingpin he played so well on "Justified" for seven seasons. The cast gets bigger, but it still feels charmingly intimate thanks to the natural way they all interact with each other.

And Lilly finally gets her due. This is as much a Wasp film as it is an Ant-Man film, with Hope and Hank on the run from the law and desperately searching the quantum realm for long-lost Janet Van Dyne. I've always been lukewarm on Lilly, as I was never a huge fan of her character on "Lost" and have to confess I don't remember much of her in the Hobbit trilogy. But as Hope, she really wins me over. There's a combination of assertive action and emotional vulnerability that makes for a great hero character without resorting to them being "tortured" just to show depth. Hope's default opinion of most people seems to be adversarial, so the ongoing theme of the film being that she and Scott Lang have to work together and watch each other's backs is more of an arc for her than him.

Additionally, choosing to circumvent the MCU's most consistent problem--lackluster villains--this film dispenses with the need for a costumed nemesis and instead gives Ant-Man a much more formidable obstacle: time. Not only is Scott Lang's normal life tormented by the ticking clock on the last few days of his house arrest sentence, but the crux of the film stands on several breakneck chase sequences and the stakes of a few ticking clocks. This works so much better, in my opinion, than the Corey Stoll character from the first film existing merely to stand in the way of the hero squad. With Hank and Hope haunted by the lost time with each other and with Janet, and Scott watching the hourglass of his own life and child pour out while he sits locked in his living room, there's practically no need for Ghost, a constantly dimensional-shifting wraith out to massacre anything standing in her way of absconding with Dr. Pym's technology. She's a sympathetic villain, one with a rich enough backstory that the film can't help but rush through too fast so we can get back to laughing and enjoying the fireworks. They might have saved her entire plot line for a third entry and it would have been fine by me. But I still enjoyed all of it, and Ghost's phase-fighting with Wasp's constantly shifting in and out of micro-size makes for some thrilling visuals.

That's one thing that'll never get enough credit for these films: the way in which Reed and cinematographer Dante Spinotti use a combination of practical sets with macro photography and CGI to achieve the realism of the tiny perspectives of the heroes. Never did I get a Honey I Shrunk the Kids sound stage vibe or a prequel Star Wars empty green screen vibe. I'm impressed to no end by that. And it really helps the film showcase more of San Francisco, a city so ripe for a great chase sequence through the sloping streets or a Giant-Man battle off Fisherman's Wharf. I don't think any Marvel movie has even showcased New York City with such love.

I think Ant-Man and The Wasp surpasses the first outing because it leans even more heavily into the aspects that made the first film different from the rest of the pack. It's relatively light and breezy, it's self-aware, and it's structured like a nice PG-13 comedy caper. And yeah, like the titular tiny heroes, the film finds advantages in reducing the stakes and the scale of the plot to smaller proportions.