Okay, campers, it's time to get candid to a possibly irresponsible degree...but then again, who in the blue hell am I trying to impress anymore? Let's get candid...

My butt hurts. Sorry. Sorry. Sorry. Sorry. I really don't want you to have any of the possible images this could conjure. Sorry. Sorry. Sorry. But I'm totally serious. I took the family to the beach, parked way too far away, and naturally forgot many things in the car. The short version is that I walked the boardwalk in Seaside, Oregon for about four miles total. In flip-flops. My butt hurts, likely, because the lack of ergonomics in those cheap rubber soles transferred all the wear and tear from my feet, legs, and back into my posterior. It's kind of embarrassing to admit, but here we are.

I was glad for the exercise, however. I had a nice, leisurely four-day weekend spent mostly in the car eating junk food, and it was nice to break a sweat and get back to business. Going to the beach is still a semi-anxious situation for me. Sure, I've lost some pounds, but I'm nowhere near being any kind of hardbody who thinks nothing of taking off his shirt in public. You should have seen it. I packed three shirts. Three. A nice white t-shirt, a longsleeve tee for chilly weather (which is always a possibility on the Oregon coast), a hoodie that was mostly for my wife, and a fun beachy button-up shirt. I'm that afraid of being bare-chested.

But on the positive body-image front, I fit just great into the fabled red trunks. These trunks are a source of comedy for Rosely and me. A few years ago, we went to the coast for a weekend getaway (with new baby Robert tagging along, of course), and since October is not a great time to dip into the twenty-degree water, we opted for the hotel's indoor pool. Except...I neglected to bring a bathing suit. So I bought a pair of stylish red trunks and hoped that the XL size would quite literally keep me covered. They...did not do as well as I had hoped. Fill in the comedic blanks yourself, thanks. So, I've owned a pair of red swim trunks that I could not and would not ever wear for the last three years. But now, they fit. Cool.

As for the food, and its continued role as a coping mechanism whenever I feel blue, that's what that still is. I've been taking things too far with movie theater boxes of candy and the heaping doses of salt masquerading as popcorn. On top of that, my children have fallen in love with these little graham crackers shaped like dog biscuits and branded as "Scooby Snacks" with the beloved cartoon canine on the box. Those are, quite frankly, my best friends in the world right now. And that, even quite franklier, is so sad.

I'll have my work cut out for me for the rest of the week, as this is one of those weeks where I go directly home with the family and start cooking dinner, so I will remain tempted to order takeout and over-indulge in order to take the sting out of a hard day's work, or a nightmarish news cycle. But this is the latest in a decade-long series of traps that I lay out for myself. I will always have a compelling enough reason to eat like a pig. Believe me, I know. I'm the only person who needs to be sold on the idea, and it's staggering how good a salesman I am under the right circumstances. Just look at the last few days. With every stressful work assignment, every unbelievable news headline that makes me embarrassed and disgusted and worried, and every minuscule social faux pas I log in to my little mental diary of excuses for why a cheeseburger and a chocolate shake qualify as a reward or salve that I deserve for one reason or another.

It's bullshit thinking, and it's bad for me. Self-care is great, and coping mechanisms are necessary, but if I'm not careful I'll just shrug and settle for the forty pounds that I've conquered and go right back to the buffet. No surprise to me, I am my own worst enemy, as the dude says. 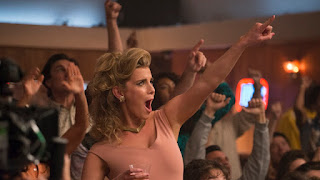 We're really cooking with gas now, GLOW fans. Firing on all cylinders. I'm really happy I chose this show at a point where I needed something affirming about people just trying to do something--anything--to fulfill that yearning collaborative creation itch. And the relationships between several unlikely pairings are starting to sparkle here.

For starters, Melrose continues to push up against the sequestration rules and the training regimens set by Cherry. It's actually Debbie whose walk of shame early in the morning triggers a moment of mutual respect with the badass stuntwoman near the end of the episode, forming a bracket of scenes featuring Cherry's attempts to make GLOW work. Melrose invokes An Officer and a Gentleman to describe her relationship with Cherry, predictably casting herself as the misunderstood white rebel hero chafing at the unreasonable demands of a black authority figure. Their battle of wills is not a racial quarrel, but the carefully curated movie reference sure does reflect how the party girl is willing to hang a lantern on their differing skin colors alongside their differing commitment to the gig.

Cherry has taken the strange position given to her and intends to do something with it, by hell or high water. And that's kind of the recurring theme of the episode. But before that, we get just a teensy bit of the last episode's summer camp vibes in the form of Dawn and Stacey prank-calling everyone's rooms incessantly, and Justine buying about a hundred Reagan-era dollars worth of pizza just to interact with a blow-dried punk hunk delivery boy. And yikes, said delivery boy gets such an entrance! Amidst the Tears for Fears song blaring, this fella is writing his number on the pizza box in a pretty smooth move, but really it's the anarchy symbol next to his number that is a really nice touch. I like this plotline. It's very, very pure.

While that's going on, Sam and Bash are moving ahead with the nuts and bolts of making a profit from their trashy little experiment, mostly by courting networks and sponsors. And I have to say...do these guys understand anything about what they are doing? They try to sell a network on putting GLOW into a Saturday morning programming block, which is preposterous thinking. Sure, it's a much bigger market, but it's hardly family-friendly content that Saturday mornings demand, and the target audience would more likely be sleeping in.

Another fairly alarming business blunder is trying to sell GLOW off the reputation of Debbie's soap opera work. Once you strip her of her status as the "big star," Debbie really has nothing going on as the star of the wrestling program, or as a character here in the show proper up to this point. She has the easiest persona, but no grasp on the genre, the wrestling moves, or any kind of on-stage material to hone. The best she can muster is a patented 1980s white person rap that I may or may not be mis-remembering as beginning "I'm Liberty Belle and I'm here to say." Ever since signing on to the gig, Debbie has kept a stately distance from every aspect of it, because it's stupid. That's it. That's her big disconnect, that wrestling is stupid in some way that soap operas apparently are not. This leads to my new favorite character development when Carmen becomes Debbie's handy expert. The "legacy" wrestler explains the medium to Debbie in such a succinct way that it's boosted my affection for the genre: it's exaggerated. Embellished for entertainment purposes. Debbie's realization that wrestling is a soap opera, and her resulting encounter with "Steel Horse" all works so damn well. His professional advice is immeasurably valuable, but it doesn't hurt that he also helped her "get her groove back," which is certainly a phrase I just typed un-ironically.

Hopefully Carmen's help and Debbie's new appreciation for her craft continue the theme touched upon early in the episode during a training scene: nerds really do try harder. That's what makes them valuable. Maybe that's why Sam keeps Ruth around, despite Debbie's place of privilege and insistence on getting rid of her former friend. Ruth has the spirit necessary to be a star, that's for sure. Her taking inspiration from Gregory, the Yakov Smirnoff running the Dusty Spur, to help spice up prospective sponsor Patio Town's...well, let me just use this word...flaccid promotional sale, was inspired. A villainous Soviet is not just a great persona to put up against Liberty Belle in a real Rocky IV scenario, it's also really funny thanks to Alison Brie's lack of self-consciousness with that cartoon accent and cheeky one-liners about borscht and the KGB. Ruth has been so run down by everyone up to this point, it's nice to get a reminder that she's genuinely talented. She deserves the win.

She also deserves the deepening honesty with Sam that she gets as a reward for showing so much initiative. Chalk up another win for Sam and his slow crawl toward being a decent person. He actually apologizes after sniping at Ruth, and they open up about their mutual mistakes, some sexual and some based in drug use or general self-loathing. I mean, Sam's still sleeping with Rhonda, which is uncomfortable at the very least and predatory at the worst. But, hey. Baby steps? I wonder which Sam will be the one the rest of the GLOW ladies think about when the show gets really rough, the schmuck who is schtupping the British airhead or the melancholy artist who taped over his own masterpiece to make a desperate dating ad?
Random Notes:

-Music Selections:
"Head Over Heels" by Tears For Fears
"Rock You Like a Hurricane" by the Scorpions (but clearly the 2011 recording...just saying)

-Sheila's eager response to Dawn and Stacey's dumbass crank calls was tremendous:
"I always have time for condiments."
"I'm very fastidious about following instructions on the label."

-"Russians. Best villains since the Nazis." How the hell did they know I'd be watching this episode at the most relevant possible time for this joke?! GLOW writing staff...are you Time Lords?