I woke up unable to take a deep breath at about 2:15 am, thanks to a sharp pain along my left ribcage area. My immediate thought was, "Really? Really?! I lose forty pounds and now I get the rude awakening that might be a heart attack? Who is running this train, anyway!" I didn't die, and I'm fairly certain I wasn't having a heart attack...probably because I'd be dead by now if that were the case. You know how you type in symptoms into Google when you're scared, and without fail the first results are always the most operatic and terrifying of cancers, heart diseases, and exotic maladies? Lupus, and shit like that? Thankfully, at 2:30 am, while I was just starting to feel my chest give way and let me breathe again, Google's first guess based on my keywords was something called "pleurisy," which seems like a catch-all for sudden sharp chest pain that is typically caused by rather mundane things.

Still, that shit is scary. I don't want to do that again. I didn't sleep anymore, needless to say. I sat up in bed and started reading a book. As a result, I'm sluggish today both mentally and physically. The workout was an uphill battle from moment one, and I just barely limped back to my desk in time to continue with the five hundred different special projects assigned to me. Stress causes pleurisy, don't it? At any rate, today was as productive as possible considering only a few hours of sleep and essentially a night terror weighing on me. On top of that, I've been glued to twitter all day thanks to the recent announcement that Escapist Magazine, a place I would never presume to call my old stomping ground but certainly a meadow in which I've tiptoe'd, is coming back in the most unlikely of reboots.

As far as food goes, I've been doing a little better. I chose a salad over a big bacon cheeseburger, and while my late-afternoon breaks always lead downstairs to the office cafe, I've still yet to try the alluringly priced frozen yogurt they keep hawking. Come to think of it, today also happened to be a Pretzel Day right out of NBC's "The Office," with all the little plastic cups of frosting and cinnamon and sprinkles and all kinds of ill shit, as the kids say. And I walked away. Because the biggest champion of Pretzel Day on "The Office" was Stanley...and Stanley had a G-D heart attack soon after! So, I bought a seltzer and smelled the fresh baked cookies. Smells are okay. It's guilt-free tasting.

What a sad little man I have become. 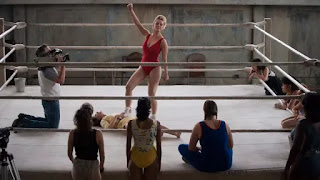 Here past the halfway point of the season, the show confronts us with the unforeseen consequences of the previous episode's character triumphs. Debbie is finally on board with this whole goofy wrestling gig! Hurray...except now she unleashes full diva mode and works her way through every single heel scene partner, dismissing them all simply because she can, and because she isn't willing to work with her perfect counterpart in Ruth. The resulting experimental matches between Liberty Belle and all the startlingly stereotypical villains are fun to watch, but it's also exasperating that Debbie isn't trying as hard as anyone else. I mean, in a world where Arthie is willing to be cast as a Middle Eastern terrorist nutcase, you'd think Debbie could figure out something to do with the smaller performer's energy. Sam, to his credit, seems to see the situation for what it is and does absolutely nothing to improve these rehearsal bouts with any direction...because he knows that Ruth is the perfect heel to Debbie's face, and it's just a matter of Debbie seeing it.

Once Ruth and Debbie inevitably square off, it's plain to see why it works so well: Debbie is an effortless grand-stander who slides easily into a velvety persona, while Ruth naturally seeks the biggest reaction she can possibly get by putting all the effort she can into over-emoting as her character. One is the sizzle, the other the steak. And since they have a long history of intimate communication and fresh animosity, they have the unique ability to non-verbally cue each other while maintaining their characters' rancor.

Meanwhile Ruth, fresh off her triumphant awakening of her ultimate Soviet heel, Zoya the Destroya, is still proving that "nerds try hard" when she tags along with Gregory to his cousin's bris. But, uh...sometimes Ruth takes things way too far. From the first scene of the episode, she's decided to plaster her janky Russian accent and dreadful "in Soviet Russia" shtick all over the place without any ability to read the room. Maybe this is what happens when a perpetually downtrodden creative finally finds some praise. It gets way worse when Ruth tries to "pass" for an authentic gulag denizen at the bris, buffoonishly treating Gregory's family like the tourist attraction she claims to want to avoid with her character. And just as the cringe comedy peaks, the room full of Orthodox Jewish immigrants find out Ruth's repertoire for Barbara Streisand numbers.

My favorite little side-plot from Episode 5 even rears back and headbutts me when Justine's sweet little romance with the pizza punker turns nasty almost immediately. I really didn't think that this lighthearted diversion was going to impact the main plot so directly, but after Justine gets into a tiff with her dude over his snobby take on her favorite films (re: Sam's blood-soaked boob flicks), she directs the aggression at her idol himself. Sam shouldn't be having sex with one of his cast members. Even he knows this, for cripes' sake. But Justine's entire essence seems to be a playfully rebellious anti-establishment weirdo juxtaposed with an adolescent naiveté, and she clearly feels rejected or betrayed by Rhonda's boasting about her illicit status as Sam's plaything. Maybe it's because Justine feels like she's the one who actually understands Sam's art. But at any rate, whatever she plans to do with Sam's camera and the rough footage of Liberty Belle vs. Zoya should get really messy soon.

Finally, all these threads seem to converge when Ruth shows up during the search for the perfect heel and demonstrates why she is it, both in and out of the ring. Gotta say, her sudden dive into bizarrely specific and gross jokes about the proud, devoted people she spent the day with is a huge indicator of our lead protagonist's narcissism. It also went on forever, though. Cringe comedy can't sustain itself more than a few minutes at a time, and while Ruth's psychotic, drunk Yentl persona absolutely tanks in reaction from the rest of the GLOW crew, it kind of tanks with me, too. I appreciate Alison Brie's commitment to the bit, but the bit itself seems half-baked.

-Sheila, on the suggestion that she bite Liberty Belle: "That's a little reductive."

-Zoya has so very many signature moves in the ring: The Hammer and Sickle, The Bread Line, The Potato Soup, Vodka For Breakfast, and the most evocative of all...Rough Toilet Paper.