I think it might be time to talk about the thing that's causing me a lot of problems in my day-to-day, and while it might be indiscreet to bury it here in my television/weight loss blog, I've established the fact that I have no one left to impress. Which should be empowering in a way, but really is just my brain giving me an excuse to eat donuts. So, uh...yeah, Escapist Magazine, a place I used to have some work published, is back in action after almost being completely drowned in Gamergate and Alt-Right garbage. I won't be welcomed back, as it turns out. And...that's all the detail I really want to give, because I don't want to speak for anyone else in the situation. All I'll say further on the matter is that I had something to look forward to, and now it's gone. But other people are sure having fun with this windfall of good news, so naturally I'd like to claw their eyes out for daring to have a good day on National Kyle's Bad...uh, Year.

Why talk about this? Well, things are connected this way in the wiring of my brain. I've programmed myself to use extreme emotional turmoil as a license to eat, slack off, act like an asshole to people close to me, and adopt a certain "I'm fresh out of fucks to give" mentality. This is not ideal, and I'm Captain Obvious. Welcome aboard. Now, once that behavioral loop is established, I can cultivate some fresh despair when no one notices or comes running to support me through a difficult time. You know, because I'm being an asshole and no one wants to deal with that. By the time I've recognized that I'm making bad decisions on purpose just to see if anyone else even cares, I've probably alienated anyone who might have. Self-induced anxiety a-hoy!

I say all this so I can say that I ate a lot of junk and acted like a bit of a jerk the last few days. No, don't go tootling around in my twitter feed, there's nothing there. I just mean I've been terse, distant, and morose to my family in between bites of spaghetti for breakfast. I gained back a few pounds, and also toyed with the idea of just letting go of this weight thing. Screw it, I can be fat. It's not like a lot of my deeper mental problems aren't associated with my body image already, right? Why not.

Well, it being a Monday, I went to the gym and avoided eating big sloppy meals anyway. Might as well get back to the routine. So, let's see...my legs hurt, a shirt I bought when I was seventeen and inexplicably kept for the last thirteen years now fits, and I just found out my little podunk town just got a fro-yo shop. So, that's pretty much all I've got going on. How're you doing? 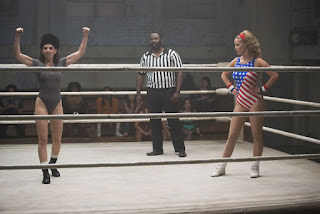 It's time to light the lights. Opening night is always an exciting time for any live show, and "GLOW" succeeds in putting together a densely plotted, highly entertaining episode with the live GLOW premiere as the centerpiece. Sure, more than half the audience are the coven that Sheila's warlock friend brought along, but they notably chant along with Liberty Belle's "USA, USA, USA!" like any other hot-blooded crowd.

Ruth and Debbie, finally resolved to make their on-stage grudge the highlight of the show, seek out training from Carmen and her extremely chill brothers, the Lumber-Jacksons. The family's backyard ring gives a real homebrew, Little Rascals, "let's put on a show" vibe that permeates the entire narrative and hits me right in my teenage attention-seeker breadbasket. Not only does the montage of their rehearsals ably tell the story of how these two former friends are compartmentalizing their feud and finding a common purpose in selling their match properly, it also looks like a classic 1980s training montage. All that was missing was "Send Me an Angel" by Real Life.

Speaking of teenage attention-seeking, I guess Justine's rebel plan to pilfer the camera didn't extend further than trying to get Rhonda in trouble with Sam. Which...I mean, as lame a plan as it was, the fact that Rhonda decides to use the camera found in her locker to make a cute little rap video for Sam is the unexpected left turn on the situation, as is Sam's blasé response. It makes sense, though. Sam knows damn well that Rhonda didn't take his camera, so why get pissy at her over it? Equally true to life and unprecedented for television, when Justine just decides to kick up the dust herself by confronting Sam and Rhonda they both treat it as exactly what it appears to be in their eyes: a little girl with a crush on an older authority figure acting out. On any other show, this would be a monumental moment where relationships shift permanently. Sam's lack of significant reaction doesn't read to me like any personal growth or enhanced regard for his cast-members' feelings. Instead, it seems almost on-brand for him to deny Justine any big "daddy's angry with you" vindication. Sam treats every GLOW lady differently, but the common link is that he sees exactly what hurts each of them the most. Cherry is a consummate professional, so Sam immediately rips down that wall of defense by acting overly familiar with her. Ruth tries way too hard, so Sam dismisses her for the most trivial and unrelated issues. And Justine, his biggest fan, shows up for his approval or disapproval (whichever is available) and he's giving her nothing. This certainly isn't over.

So, with that becoming all the more uncomfortable, it falls to my other favorite, pure character to provide something lighter. Carmen's stage fright is unexpected considering her pedigree, but perfectly understandable when you consider her lifelong expectations. Bash coming to provide her moral support yet again is a good way to tag up their last encounter in the parking lot where the producer kissed her in order to try and please her father. This time, the affection is more genuine even without being in any way physical. Or inherently romantic, really. It's a great moment of vulnerability for both characters, once Bash confides that his mother has cut him off and that he's spent a prodigious six hundred grand (in Reagan dollars!) on this ramshackle little wrestling program.

Vulnerability becomes the theme of the night, even for stone cold Debbie. The undisputed star of the wrestling show tellingly insists to Carmen's brothers that her goal in the ring is "to fucking fly," and after watching the hours upon hours of her perfecting the aerial stunt that ends the match in her favor, nothing could have hit a viewer harder than seeing her robbed of that beautiful moment by only the judgmental stare of her husband Mark. Who, lest we forget, has a whole lotta balls being judgmental about anything ever. Mark treats the sight of his beautiful wife towering over an enraptured (if sparse and overly gothy) audience as if he just walked in on her performing in a live sex show. If that's exactly what he's supposed to think GLOW is, the show needs to lean much harder into that misunderstanding, because right now it just appears like Mark doesn't know what wrestling even is.

The infuriatingly strong characterization of Mark from the writers and from actor Rich Sommer comes from how subjective his point of view is drawn. Yeah, of course it's perfectly justified for a man to track down his estranged wife and child if they suddenly go off the grid like Debbie has. Yes, Mark's spineless counter-offer to being thrown out of the house is to remind Debbie that he pays the mortgage and all the bills, so he can damn well sleep in the guest room, and that makes perfect sense. From another angle entirely, Mark might seem like a perfectly reasonable guy. He isn't, but Sommer and the writers ride that line where the so-called "nice guys" of present day reside. Just because Mark has never raised his voice or taken a swing at his wife, that doesn't mean his side of the conversation isn't built on a power dynamic that keeps Debbie dependent on him financially and emotionally.

Boy, of all the things to go wrong on opening night, you'd think Cherry and Tameé staging their tag-team match against Dawn and Stacy as a surprise beatdown fantasy against the KKK would be the biggest problem. And as it turned out, that was the strongest hit of the night. And the best part about the emergency change from the Beatdown Biddies to the Klan is that Junkchain and Welfare Queen don't have to endure any audience hissing based solely on the color of their skin. Also, Keith is the referee!

The final moments of the episode, with Rhonda unexpectedly jumping into the ring to get the whole cast going with her silly GLOW rap theme, is an illustration of unity and invention and showmanship that makes this cast so endearing. Coming directly off of Debbie's devastating exit from the ring and conversation with Mark, it was so very necessary to end on a high note.

-Ruth and Debbie calling out "Thank you, places!" like the true theatre kids they are. That's verisimilitude, right there.

-"I will fill your American swimming pools...with borscht!"

-Zoya's hairsprayed bouffant being sculpted into the same shape as her Russian hat, whether meant to be on purpose or on accident, is an amazing work of art by the hair and makeup team.

-Sheila can play the keyboard! But only "Theme of Exodus" apparently. That's pretty deep-cuts.