I received some decent enough advice over the last few days through the wasteland of Netflix originals I've been watching and the constant refreshing of my twitter feed, it's starting to feel like this all-consuming well of uncontrollable negative emotions might spit me back out soon.

First piece of advice: feelings are real, and they're not real. Like, the sky is blue, but when it's cloudy we think it's grey. But really, it's still blue. The clouds are just in the way, and they are passing by. The clouds are the feelings. They can't change what matters. That one's from "Orange is the New Black" Season 5.

Third and final piece of advice (paraphrasing): When monkeys lose a banana, they immediately start looking for a new banana. They still feel bad, but they move on to the next goal. Humans are the ones who think about the lost banana over and over with their extra neurons, and construct pain out of the loss. That's via twitter, specifically retweeted by Sharayah Pranger (@BabySheepComics) and quoted by Jhanteigh Kupihea (@jhanteigh).

That's the mindset I'm trying to put together for myself at the moment. It's rough. It's really much easier to grab McDonald's for dinner, eat three cookies with my morning coffee, and just stew in my own cerebral sauce for a little bit. And that's what I've been doing. But I'm still making it to the gym each day, and I don't think I can go back to the size I was when I started this. I really enjoy the benefits more than I enjoy the easier lifestyle.

Irony of ironies, the writing has become the hard part. I started this whole thing because I could easily flop a thousand words out a day, but I had trouble staying motivated to keep working out. Now? I can easily go to the gym and push all my horrible feelings into the pedals of the stationary bike, or let the hate and anger flow through my arms while I bench-press 150 pounds over and over. But writing about it? Watching an episode of TV critically and actively, the way a good reviewer should? Man, that got tough.

But, I'm here. I'm always here, even when it feels like I'm spinning my wheels. What's the alternative, right? 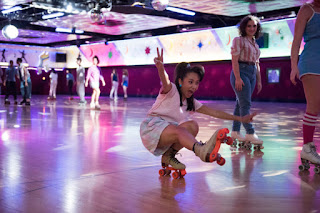 Being a guy, I've never really known what to make of "group of ladies syncing up to the same menstrual cycle" jokes. Here, on GLOW, after the objective success of the wrestling program's first exhibition (cases of stage fright and shitty husbands aside), it seems to be taken as a sign that this troupe of oddballs is finally starting to grow together into a family. Except Ruth, of course, who might never be completely in sync with her fellow performers. Instead, Ruth drags out a real blast from the past of the 1980s: a home pregnancy kit that necessitates an entire test tube rack and takes the better part of an hour for results from the look of it (really, really do not @ me, it is not my fault I never had occasion to use one of these ungainly things and might have that detail wrong).

Sheila's birthday is the B-plot of the episode, and serves the rest of the personal dramas quite well by highlighting them all. Ruth has her terrifying pregnancy situation weighing over her too much to get into the family-oriented festivities. The group bonding is so strong that no one takes into account how uncomfortable Sheila is with all the attention, until she gets the rink to herself and yet again enjoys solitude more than she can ever enjoy even the warmest of acceptance. And even Rhonda and Sam's breakup factors, with Rhonda using the birthday party as an excuse to leave a literally naked and vulnerable Sam after blindsiding him, and Sam alarmingly suggesting that they attend together as a date to salvage things.

Once the rollerskating party gets into full swing, there's nothing more heartwarming than Sheila soaking in the love from her squad and leading them into a triumphant howl. The "106" on the birthday cake denoting her age in wolf years was pretty fantastic, too. But Ruth isn't the only GLOW lady with gloom hanging over her head. Bash is missing, after all. Uh-oh. Carmen's knowledge of the producer's money problem has her disillusioned, and Cherry is easily able to divine from the younger woman's uncharacteristic fits of cynicism that something is amiss. That's quite poorly timed, especially with Sam excited about renting out a former Mayan-themed porn theater for some visual flair and production value.

Debbie's drama with Mark takes on yet another abrupt jerk into a different direction. After ruining her performance, tossing divorce papers in her face, and minimizing her in every way possible, Mark is suddenly using CBT techniques and cooking her dinner. Hmm, seems almost like Mark thinks he can try on different relationship dynamics without needing to buy them, like he's in a JC Penny shopping for Haggar slacks. The kind of guy who goes to a lawyer and draws up divorce papers as an empty dramatic gesture meant to recapture his footing in the relationship belongs in effing therapy. I made a call in the pilot episode that Mark would be the next evolution of the unbearable jackass spouse character played with oozing superiority by Jason Biggs on "Orange is the New Black," and boy this show does not disappoint. But still, the resulting dinner discussion about where and when their marriage soured has some pangs of realism and humanity on both sides. Mark likely viewed their life together from a completely different angle and filter from Debbie, and whether he was really suffering in silence or just crafting that narrative to himself to justify his cheating, he is genuinely remorseful and eager to change...for now.

Our other principle male character, Sam, is also looking to regain his high ground, and has decided his relationship with Rhonda isn't doing his authority over the show any favors. Duh, sir. So very duh. But then, holy hell, not only does Rhonda preemptively upend the table on him, she articulately nails exactly why Sam suddenly panics and tries to make things work the moment it becomes clear he's going to have to be alone with his own neurosis once she bails. Sam is not entirely capable of empathy in these situations, but as we see later on when he takes Ruth to end her pregnancy, sometimes his casually caustic viewpoint can be a grounding presence. He does not harangue her about her choices, the implications regarding Debbie, or even for waking him up to drive her to and fro. He's just there when Ruth needs him, and he's willing to put her at ease with a little playacting at the clinic and the promise of donuts afterward. For Ruth in the moment, it's a comfort to know that Sam will not treat her any differently or regard her with any more or less respect, because he's not wired to do so. And it's a terrific turnabout on Sam's bringing Ruth along to see the possible new venue. Sam's decision about the theater and Ruth's decision about the abortion both require an emotional copilot, but both of them understand that the copilot has no sway on the decision and shitty commentary is not appreciated.

-It's very significant to me that Rhonda is the one to notice Ruth's enthusiasm faltering at the roller rink, and of her throwaway explanations for not feeling well, one is the title of the episode and the other is the exactly correct explanation. Rhonda is just full of unexpected insight in the episode!

-Poor little baby Randy is a prop to both of his parents. Debbie deflecting valid criticism by shifting her attention to the little dude, even momentarily, while Mark uses his newborn son as his last toehold in the house and the life of his wife makes for a really messed up childhood on the horizon if this continues.