This week seems to be moving in slow motion for me. I've been burning out at work, thanks to a combination of several groan-worthy special projects coagulating into an endless to-do list that overtakes me a little more each day, despite the amount of work I'm getting done. On top of that, I've been exhausted by the time I get home thanks to a problem with my car forcing me back onto public transit every day. Just the act of standing and waiting for a connecting bus in ninety-six degree heat is enough to put me into a coma by 9:00 pm.

Oh, right, and I might have a second job lined up. That's not a done deal yet, but it should be another way for me to feel the stress of the day. Or, it'll just be another method of putting me to sleep easily before my kids even go out. It's not a creative job or anything remotely related to my skill set, it's exactly what it sounds like. It's a night job.

Anyway, I've managed to gain five pounds back. Huge relapse. Been eating lots of leftover pinata candy, cake, and all other sorts of bad stuff. I just haven't been able to lift my motivation up very high. I am still making it to the gym every day, but the snacking has gone thermonuclear. I don't know how to pull out of it, but I also don't feel like I have time to pull out of it. This is a real pickle, now. If I'm not careful, I could gain back a lot without really looking. This was only about a week's worth of devil-may-care sugar intake. Imagine what happens when the weather gets cold and all I want to do is eat chili and watch TV to stay warm.

On the plus side, if I manage to snag this second job, I won't have the time to snack idly. I'll be on my feet pretty much all day, from 7:00 am through 11:00 pm. That has to do something. I think that and a more aggressive attack on my portion control might clinch me back to where I was. It's been a trying few weeks, and I thank anyone who's still with me. These posts have been real sad-bastard in tone, and I don't mean to be that way. This should be fun, and potentially inspirational! So, let's kick off a new attitude with a funny story...

I uh...I need guys in the locker room to read the room a little. I'm sweating like a junkie, breathing like a damn moose, and trying like mad to get my clothes on so I can leave this horrible tiled prison. Stop chatting with me. This is not the forum for this. No, I didn't catch the game. What game?! What sport is playing right now? Please, please just let me out of here. I'm awkward, and I have body issues, and the locker room is a room for lockers. Not for people. But this guy, who I'm sure has his own office and is on salary so he can take all the time he wants standing in the nude and talking about his golf swing, just cannot read the mortification in my eyes. Because my eyes are firmly planted on either the blank wall or my own clothes as I try to button three things at once. SOCIAL CONTRACT!

Yeah, and you think you had issues. 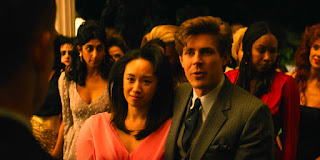 Somewhere down the line, the idea that the second-to-last episode of the season would be the big incidental climax got credited to "Game of Thrones," when really it went much further back in the "Golden Age of Television" you hear so much about. Here on "GLOW," it seems to have taken the shape of the biggest and broadest comedy swings at the show's setting, with the biggest relationship news landing a little dully nearby.

Bash has finally come clean about how destitute the production has become, after a nauseatingly WASP-y plea to his mother Birdie for one final handout. Resolved to make up the difference, the wrestlers take their show into their own hands...kinda.The conceit that a car wash could scare up nine thousand dollars now is laughable, let alone back in 1985. But it's a delightfully utilized 1980s trope. Wisely, the show doesn't linger for long on the gag after the punch line of a $287.00 haul is revealed. Instead, we get another important cultural cornerstone of the 1980s comedy: a motley crew of misfits infiltrating a snooty, conservative cocktail party. It's a lot to stuff into one episode, in theory. But the swanky party getting out of hand--like say Bash's first big bash attended by the GLOW ladies--is something that happens almost entirely in the background.

Having Bash crash a fundraiser with the lamest excuse for his twelve-woman entourage ever conceived (all of them are allegedly former crack abusers using wrestling to stay clean) was veering the show into the realm of the cartoon. Thankfully, the plot eased out of that, while keeping the goofy tone to break the tension going on in the foreground. Montage time! Carmen's cheery kickoff to every single GLOW lady talking up the effects of crack, the scariest and most exotic of street drugs to 1985 affluents, is the big comedy highlight of the episode. And of course Ruth takes the opportunity to not only improvise an impassioned display of truth that addresses her rift with Debbie and her own internal growth, it also happens to be the only positive argument for wrestling that has ever gotten through to Birdie. And just like that, the plucky little wrestling program lives another day even without gaining a single cent. That's a cute left turn on an episode wholly concerned with fundraising.

But gloom is certainly on the horizon for the show. Cherry has to choose between a possible real gig and the increasingly unlikely wrestling startup, and considering how pragmatic she is, it would take a lot to drag her away from a buddy-detective show. Meanwhile, despair engulfs several of the principle characters once Sam, disgusted with the sea of white Republicans, finds the party's hired jazz trio and offers them some free blow. This one simple act is a thesis of Sam Sylvia in and of itself: fundamentally, he's a nice enough guy who just craves a captive audience and vehemently turns his nose up at polite society, ever the professionally uncouth artist type.

The more I heard early on about Sam's next film idea, Mothers and Lovers, the more I understood that it was a cute little jab at Back to the Future, but I never expected for someone to actually break the news to the schlock auteur that his supposedly deeply personal project had just opened to rave reviews and boffo box office, courtesy of Steven Spielberg and Robert Zemeckis. While it's a strong enough slow-burn gag, I can't help but feel for a journeyman with a solid idea in his head getting the ultimate gut punch of being told that not only did someone beat him to it, but that it's poised to be one of the defining pieces of pop culture of the decade. I don't think I'd handle that as well as Sam does. Anyone who reads these reviews with regularity can attest that I feel a strong kinship with anyone who in their darkest moments wonders, "Why even try? Why do this thing that I'm compelled to do, if I'll only ever be doing it for myself?"

Justine drops an even bigger hammer on Sam at his low point, and at this point it's not too much of a surprise that she is an estranged daughter. Her ongoing quest for his approval culminating in her father kissing her in a coke and booze haze is like some terrifying funhouse mirror image of Back to the Future. Leave it to Sam to see in front of him someone emotionally incapable of dismissing him as a complete loser, and to immediately ruin it. Sam's immediate come-on, as well as his cynical assumption that his daughter only wants something (money, bone marrow, etc.) are two very different methods of the same neurosis. Sam loves to preemptively offend, disappoint, provoke, and disgust the people around him, because it'll send them away quickly before they see how vulnerable and in need of validation he really is.

Funny enough, it's the darkest spin on Marty McFly and his father George, who both voice that they cannot handle rejection and therefore abstain from ever putting themselves (and their art) out there. Man, this show really is about artists and performers first and foremost, isn't it?

-Bash's mom played by Elizabeth Perkins is a great fit. Her snooty ice queen routine from "Weeds" coupled with her familiar face from a 1980s classic like Big is a real one-two punch for "GLOW."

-"'Chambers and Gold.' It's basically 'Cagney and Lacey' but with a black girl and a Jew."

-I totally forgot about our latest check-in with Debbie's husband Mark: Mark comes to the car wash and gets his car washed. This concludes our check-in with Mark.

-"My middle name should be crack. Also my first name...and last name."

-I can't help but feel this twenty-nine minute episode, the shortest of the season thus far, is missing at least one or two scenes. Considering the pilot episode was thirty-seven minutes, it's conspicuous to see the penultimate entry shaved down so considerably.