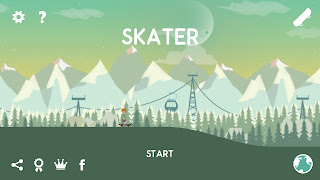 I'm a real sucker for any game that lets me do some sick tricks. Any time a motorcycle, car, or any type of conveyance can flip or jump over a ravine, I'll give it a shot. I also had a pretty serious endless runner addiction around 2010-2011. Jetpack Joyride was probably the app I opened the most on a given day. So with all of that in mind, there isn't much that would stop me from enjoying Skater - Let's Skate, wonky title not withstanding. And for the most part, I did enjoy it. The game dropped on iOS and Google Play back in late July from publisher ZPLAY, and has around 10,000 downloads on the latter platform. 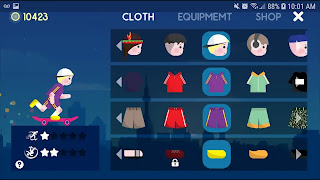 As one might expect to, the player takes control of a little cartoon skater that can be customized for clothes, hair, and skating gear, which can all be unlocked via progress, daily sign-in bonuses, and by use of the in-game currency that is collected throughout the courses. Controls are so blessedly simple, which is key for the genre. A simple hold down on the right side of the screen gets you rolling, but the same hold down also controls your backflip once airborne. So, much like DATA WING, the struggle is not a correctly timed button combination so much as it is just timing and controlled release. More often than not, what killed my little skateboarder was my cocky attempt to fit two more backflips into a massive jump, only to splatter myself. The learning curve is surprisingly steep at first. This is one of those games, I imagine, that gets a lot of downloads but might struggle with player retention due to rage-quits. 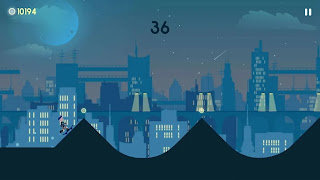 It's worth sticking it out, because Skater - Let's Skate is one of the few endless runners that has a calming presence. You'd imagine a game centered on extreme sports might have the typical fart-rock soundtrack that blares into the back of your skull, maybe accompanied by several unimpressive catchphrases from your character looping over and over. Instead, this game shows polish, professionalism, and inspiration, particularly in the art department. The background art of major cities and lovely stylized landscapes provide a muted, moody backdrop while soothing electronic music softens the blow of every wipeout. This angle toward serenity is a great calling card for a game that probably could easily inspire a lot of frustration, and it gets even more points from me for evoking Noodlecake Studios' Alto's Adventure and the newer Alto's Odyssey, which are fantastic mobile games. 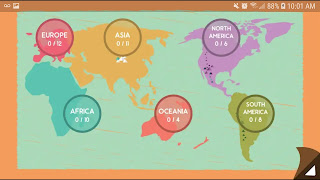 Speaking of frustrations, the ad-breaks for this game feel needlessly invasive. A new video ad literally interrupts your play every three attempts, which could get very frequent if, say, you suck at video games in general (like me) and have a hard time maintaining a rhythm when you get interrupted so frequently. After the ads, you are dropped into the pause menu, as if the last agonizing thirty seconds were your own doing. That isn't ideal, but at the very least the folks at ZPLAY did include a three-second counter buffering between pressing play and being dropped back into the game, giving you time to prepare. I experienced lots of lagging, which might be the limits of my device but I suspect it's the limits of the random course generator.

Either way, it made the "endless" mode that greets you on the main start screen pretty hard to play past the first few runs. Luckily, the much better mode is the "world tour" option that takes you to over 50 different picturesque locations around the globe and gives you pre-designed courses with their own unique challenges. It's a little strange that the endless mode is given top billing, but thankfully the better version of the game is a mere click of the globe button. 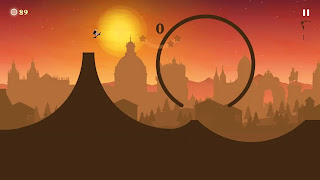 It's not really deep enough to get me through my commuter train ride, but it's cute and it's pretty economical in design and execution. It's an easy way to kill a few minutes, and the folks behind it likely have some wonderfully designed projects in their future.
Labels: blog Casual Friday