As a tribute to the late great Burt Reynolds, the next few weeks of Letterboxd reviews featured here will be a deep dive into the different stages of the man's career. 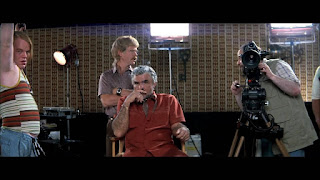 You don't expect that a movie about porn will be as sophisticated and dynamic as Paul Thomas Anderson's Boogie Nights the first time  you see it. You don't expect the humanity, the tragedy, or the wit of it. When it landed on the festival circuit in fall of 1997, it was almost instantly regarded as the movie of the year for scrappy independents. Then it opened wide to a respectable box office haul of $43 million. It goes to show that movies about show business have some kind of leg up on the competition. Something about stories involving hustlers, artisans, and day players all coming together to put on a show. Even an X-rated show.

What looked plainly to a lot of audiences like a dirty movie about desperates and lowlifes ended up connecting to a much larger base thanks to the fidelity of relatable characters. The film is less about sex and money and drugs as it is about filmmaking, collaboration, and looking for acceptance in surrogate family. The interwoven arcs of each character's life trajectory are mostly told in hallucinogenic tracking shots swimming through parties and porno sets. Time dilates as Anderson subtly widens out from a real-time immersion in the setting and lets a five minute scene represent five years worth of character development. Four pages of visual storytelling manage to give vivid insight on each of over fifteen characters without pausing, like a coked-out socialite schmoozing through a labyrinthine gaudy mansion in the Valley. The result is an ensemble showcase that functions as Paul Thomas Anderson's equivalent to The Godfather. Evoking not just the look, but the mood of an era to tell an ultimately personal set of familial stories during a period of great change and upheaval in their world. Anderson uses this Shakespearean structure to render a sort of low-key absurdity bubbling under a self-serious saga of an opulent organization brought low by time and ego.

I have no doubt that when we reach peak 1990s nostalgia, Boogie Nights will be called upon for a remake as a dense, 10-hour HBO television season. That's what Anderson has artfully shaped down to a somehow brisk 155 minutes here. All at once a dorm room classic with trippy, quotable comedy and easy to spot character actors, this also functions as an artsy exploration of personal fulfillment and validation. I'm frankly surprised this one didn't pull in as many faux-deep dudes as Fight Club or Garden State did. It's a much more satisfying, meatier film than those, but it also is sobering in how much it demystifies the adult film industry. The movie itself isn't particularly interested in sex as much as it is with the kind of personalities that live in this line of work, at the specific era that it depicts. The camera whips around to leave a scandalous sex act in a huff and to chase down whichever character is stumbling toward a big moment in their life just down the hall.

At the top of the heap, serving as the omnipotent Don of this world, is Burt Reynolds as Jack Horner. As a wonderful supporting turn in a daring, off-kilter film it was just what Reynolds needed as a crescendo of his second big career stage...the elder statesman with a touch of camp. As Horner, Reynolds doesn't blaze hot so much as he smolders and plays with the audience's anticipation of his benevolence or his venom. Reynolds famously scuffled with Anderson on set and was less than enthusiastic about the film and his role, regardless of the Golden Globe win and Oscar nomination he received. Burt may not have seen the subtext of the project, or possibly he just wasn't very impressed with the young writer-director, but he's great in the film. Anderson may have seen the exasperation of an older, more experienced showbiz veteran and channeled it into Horner, a character who even goes so far as to spew Robert Evans-style rejoinders like "You bet your ass" and actively must stop himself from sighing in indignation as his empire crumbles down to a mere hustle. His flashy clothes and jewelry, offset by the perfectly sculpted coif of gunmetal hair and often a set of thick shades, Horner is a logical extension of Reynolds-type characters from the 1970s tempered by age and desensitized by experience. His eye is technical, almost clinical. His instructions and explanations to his minions around him are authoritative, but patient and respectful. Of all the main protagonists of Boogie Nights, Jack is one of the few whose emotional arc is not plainly given to the audience. It has to be found in the pained resignation lying plainly behind that ever-present layer of Burt Reynolds showmanship. That trademark swagger and the glint of possible amusement (or rage) in his eye is what makes the character so real.

Reynolds' Odin-like father figure is balanced by the wide-eyed manchild performance of Mark Wahlberg, who is always at his best as a meathead such as Dirk Diggler. The character is written and framed as a sort of beatific kid-messiah figure of the decadent '70s porn world, and fittingly that includes his instant sense of superstar entitlement. The real standout performances come from the smaller characters who most nakedly (ugh, sorry) experience the struggle to move on with their lives. Don Cheadle's Buck, a B-actor of the production company, begins the film as an outsized sight gag in his cartoony cowboy aesthetic. But by the time the film ends, we'e seen real pain and hope and despair in his struggles to pursue his dreams, and we root for him. Heather Graham's Rollergirl seems required to constantly keep bouncing around each wild party, as if standing still a moment will force her to confront her very raw vulnerabilities. William H. Macy steals every scene he's in as sad sack Little Bill, the matter-of-fact assistant director who definitely ruins that New Years party. Being that the film is less about the industry or the era than it is about this extended family of outcasts searching for acceptance and only finding it in each other, it's fitting that the acting manages to outshine the drifting, dreamy photography and even the authentic (and appropriately garish) production design.

By the time the final twenty minutes or so of the film have gone completely off the rails, with a deranged combination of cocaine, Rick Springfield's "Jessie's Girl," haphazard firecrackers going off, and a wild-eyed Alfred Molina waving a revolver around, it's clear that Anderson's chief thesis statement for the film is that every party, or for that matter every heyday of easy money and free drugs and casual sex, either has to end in its proper time or mutate into irreversible nightmares. That's an inventive way to illustrate a fairly mundane observation of human behavior, and I'd forgive a critical audience for seeking more than that out of such an ambitious and hefty film. Luckily, the film ends on a more poignant tracking shot that aims back to the surrogate family, all operating in tandem with each other and filling the gulfs in each other's lives. Accepting each other, even after the tumultuous fights, the life-altering mistakes, and the uncomfortable ways in which they marked each other.