"I am going to sleep good tonight!"

That's one of the best improvised lines from the movie Step Brothers, wherein Will Ferrell is in the process of burying John C. Reilly alive and is feeling the burn of digging. I love that line. That's my current mood this whole week, I am going to sleep good tonight. I haven't felt this way since I worked a landscaping job and came home sweaty and dirty after a full day of digging, raking, lifting, pushing, and bending over.

Bending over. Effing sucks. It's the worst thing for a guy with a beach ball permanently attached to his midriff. My back has had a mild ache since...I dunno, 2003. In high school, I used to brag that while the quarterbacks and track stars all had six-pack abs, I had a whole keg. Even now, after (drum roll please) 48 pounds being worked off, my gut remains intact. So ab workouts, or to be more current and trendy, "core" workouts are not my thing. I mean, exercise in general is not my thing, even after six months of doing it almost every day. It'd be like saying doing the dishes is my thing.

So, what possessed me to switch from my trusty chest press and rowing machines in the gym to the much reviled ab machine? Maybe I was really hoping to hit that beautiful round number 50 and come to you bragging today, so I was trying to shake things up and keep my body guessing. What I got instead felt exactly like a colossal tummy ache, the likes of which only come along after a night of heavy drinking or an endless shrimp buffet. Turns out, my insides were fine. I'm just sore as all heckfire in my ab muscles. They do exist! And now they feel feelings, and stuff! So, yeah, I'm going to sleep good tonight, but holy cats, my back hurts and my front hurts. How two-dimensional of me.

I'm glad that I've shed a couple more pesky pounds, but the enthusiasm I had back in April, when I was dropping half a dozen pounds a week like it was nothing, I miss that feeling. Now I just feel like if I don't go to the gym, or if I participate in an office Oktoberfest party, I'm going to lose all my progress in the week. So there's that feeling, which mingles with my natural instinct to repress things until they get out of hand, and before you know it my hunger overtakes my common sense and I'm trying to find the bottom of the peanut butter jar. With a slice of pizza. Hello, I'm Kyle, and I am a trash panda. Emphasis on the panda, for its shape.

But it's okay! Because I can push 220 pounds of chrome using just my arms and chest. And that's pretty dang close to my own body weight at this point. Every time I brag about how much I can bench, I feel like a dreadful bro-ham, but I always chase it with "I have precious little to brag about. Let me have this." I wonder how many bro-hams have the self-awareness to realize that for themselves. It's nothing miraculous to lift chrome. It's actually quite mundane. I'm much more proud of my truly, truly awful Christopher Walken impression, and that's sad. Because literally everyone has one of those, and mine is particularly bad.

What the ham and eggs was I even talking about? Sorry, I've had a lot of sauerkraut and German potato salad today. I've derailed. Let's talk about TV! 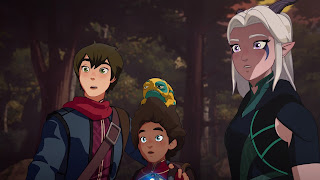 I fell in love with "Avatar: The Last Airbender" while in college, the DVD box sets thrust into my hand by a dear friend who made it his mission to push the show around campus, effectively becoming the most wholesome facsimile to a drug dealer you've ever seen. It's a wonderful show, combining the easy banter of a sitcom with the epic action and mysticism of a fantasy novel series. The sequel series "The Legend of Korra" might not have as rabid a following, but it took the winning aspects of the OG show and added some much more crisp digital animation and more complicated ongoing narratives. Now, some of the key players behind the scenes of that world (Aaron Ehasz and Giancarlo Volpe, specifically) have partnered with Netflix to present "The Dragon Prince," a logical successor to the previous shows built from the ground up to be just as satisfying an expanded universe, but more efficient for a streaming platform's continuous viewing model.

At times, it's uncomfortable how much of A:TLA's genus is present in "The Dragon Prince." The "Book X, Chapter Y" title cards before each episode, the cute animal sidekicks, magic powers derived from nature, a war precipitated by one faction's unchecked aggression, a boy on the cusp of manhood who wants to prove himself in combat, a fun-loving younger boy who has trouble coping with world-changing responsibilities, a young woman whose greatest asset might be her empathy, a quest across the fantasy realm to deliver something important, complicated father-son relationships, adolescent crushes, deceptive royal advisers angling for power...it's a lot. It's distracting at times, but there's a measure of satisfaction in the familiar as well.

That's not to say there aren't a lot of new elements to love. While "Avatar" showcased magic abilities based on Eastern traditions and philosophies about the transfer of energy or chi, this show has a decidedly more Western fantasy perspective, which means magic is conjured with incantation, ritual, and talismans. And boy howdy, are some of the mage moves really metal, such as Claudia's crushing a spider in her hand and transmogrifying it's juices into a fireball. Metal as hell. Another important difference: "Avatar" was a clear black-and-white adventure, with the evil empire of the Fire Nation on one side and everyone else on the other, rallying around a Skywalker-style Chosen One. This show features heroes on both sides of a long held cold war, and while the human princes are the heirs to a legacy of corruption involving forbidden black magic and unprovoked slaughter of the dragons, our hero from the elves is a trained assassin sworn to kill in cold blood. This is a family-friendly "Game of Thrones" riff, where your sympathies for each faction are continually tested as we learn more and more how no one in this world is completely on the right side of history. While 'Legend of Korra" might have dabbled with this notion in the titular Avatar's choices and the moral high ground of some of her villainous foes, we knew who the good guys were and who the bad guys were. Here, it's less about good and bad and more about breaking the cycle of mutually assured destruction.

It sounds really, really heavy, but keep in mind that these are half-hour episodes of a proudly goofy cartoon. It's still fun and light in the right ways, without sacrificing these heady themes. While "Avatar" was a show aimed at kids that pulled in an enthusiastic adult audience, this show is more purposefully aimed at both. It's darker. It's more morally complicated. And it's way more brisk in plot progression. I've bleated for weeks about how bloated a series feels with more than twenty episodes per season, and "Avatar" was no exception; each season had at least a few episodes that are entirely skippable and offered very little toward the characters or their story. "The Dragon Prince" is a svelte nine episodes, and consequently has no time at all for a lot of ancillary exposition or time to just live with the characters in their day-to-day. Aang and his crew got to develop as a surrogate family, and everything felt so natural in progression because that was a week-to-week show by design. This is a binge-design show, so the plot emphasizes urgency. Rayla's plot starts right in the middle of the most important day of her life, and the human kingdom is moving to strike (or be struck down) within the first few minutes. This is refreshing for the most part, but it does admittedly blunt some of the emotional impact of big confrontational moments. Sure, King Harrow and his mage adviser Viren illustrate enough through their first few scenes that they have a real Bartlett-McGarry relationship, but we don't get to see enough of it before their friendship is shattered by their fateful argument. Sure, Callum and the King have a precarious step-dad and step-son interaction or two, but there isn't enough meat to it to justify the growth of their bond that would climax in Callum finally calling Harrow "dad."

But the writing and vocal performances still take the time to endear us with some top-shelf wordplay and deadpan gags, which are always welcome. Jack De Sena, breakout "Avatar" voice actor who made Sokka such a delight, is really funny as Prince Callum, of course. His ability to use a naturalistic comedic timing to take the air out of all the pomp and fantasy of the premise is great. Soren and Claudia, Viren's children and chief minions, spend most of their screen time trading cornball jokes that really speak to their childhood together. Meanwhile, Paula Burrows as Rayla is a worthy successor to Mae Whitman's earnest big speeches as "Avatar" lead Katara, though I'm unclear on Rayla's semi-Scottish accent, which to my (completely untrained and unattuned) ear sounded like it would drift in and out from Scottish/Gaelic to a non-regional North American accent.

The digital animation of the show is a big step up as well, and enables the action sequences to have more three-dimensional depth and the "camera" to move as dynamically as the characters do as they fight and summon and parkour their way through forests and monolithic castle walls. It solves my biggest gripe with watching anime--the floating effect of big action sequences--by reducing the frame rate. The moonlight duel between Rayla and her mentor Runaan is properly cinematic in scope even if we haven't seen enough of their relationship to feel as strongly about the fight as, say, Zuko versus Azula. And when our heroes go up against gigantic monsters on their quest, the creatures feel more alive and textured, less like the subject of a painting and more like the inhabitant of a real environment.

It's a really fun adventure show, and this first season ends on the promise of bigger and more epic chapters to come. If I had to guess, and if "Avatar" is any hint, I'd bet the plan is for six seasons or "books" to coincide with the six primal sources of magic in the world of the series. I'll be there for the foreseeable future, and I recommend it to anyone who liked "Avatar" and "Korra." At a mere four hours and change, it's a less intimidating commitment than most animated adventures, and it's got all the marks of quality fans have come to expect from Ehasz, Volpe, and their creative teams.

-The number of modern day pop culture references is staggering: Karate Kid's "sweep the leg," the ominous "Winter is Coming" mantra from "Game of Thrones." Bait the glow-toad gets a "say hello to my little friend" shout-out, and an extended riff on "hangry." Yikes. I'm not sure how I feel about these. They are fun enough, but they are also aimed a lot lower than I'm accustomed from the humor of the show.

-I really enjoy Bait the glow-toad, particularly his imitation of the Netflix "buh-bong!" at the start of each episode.

-"I sure do like hanging out with other humans, and talking about things like...money, and starting wars." Too real, Rayla. Too real.

-I really can picture Sokka doing Callum's Famous Jerkface Dance, which is a bit of goofy levity that made me grin ear-to-ear.