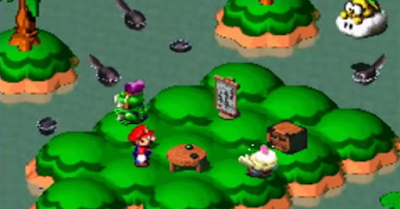 I don’t understand music. Any time a game drops a musical puzzle on me, I become a complete fish, flopping around until the solution presents itself to me. The hardest part of any Silent Hill game is when a piano appears and I have to play a specific set of notes to progress. I only bring this up since in today’s session of Super Mario RPG, I will indeed encounter a musical interlude.

But first, some updates on the exercise part of things! I’m finding it relatively simple to ride the exercise bike in sessions of around an hour, give or take. It seems to be the perfect length of time since I feel like I can get a lot of game progress done, but also not so much that I hurt myself. At least, not in the obvious ways.

I’ve discovered that after about 20 to 30 minutes into biking, my genitals go numb. Not a painful numb necessarily, just a very concerning sort of numb. Like, I’m aware of what it feels like to have genitals, so when I suddenly do not feel like I have them, it is alarming. This has nothing to do with today’s sessions since today’s session will involve sewers, river rapids, poison, and tadpoles, but I just wanted to talk about my genitals (or lack thereof) for a little bit. Onto the path for the second star!

When we last left off, Mario and Mallow were exiting the first world map area and entering the Kero Sewers, arguably where the game really starts to open itself up and show you The Real World™. Up until this section, status effects have been mostly non-existent, but once you get to the sewer you find rats in swarms, and rats looooove to inflict some poison.

Pretty much every battle that involves a Rat Fink begins with the rat flicking poison at one of the two party members, which hits them for damage every turn, as well as turning them an odd shade of purple. Insult to injury! Thankfully, the game has streamlined everything so that all status effects go away at the end of a battle, including fainting. Sure, this keeps everything somewhat simpler, but it also does away with having to carry annoying status heal items. I love Final Fantasy 6, but I hated having to carry around so many antidote items just to deal with random status effects hitting party members in low-level fights.

Kero Sewers also shows the sort of weirdness that areas will throw at you to get you nice and confused. It’s full of pipes that lead all over, with the goal being escape from said sewers by way of draining the water from one area and then discovering the correct path out right after that. I spent a little more time here than usual just exploring and clearing out all the enemies to power level a bit before taking on the area’s boss, which I remembered being a pain.

I certainly remembered wrong, or I’ve gotten a heck of a lot better in my years away. Belome, an early encounter that can get gnarly fast, was a favorite as a kid since he’s some weird panther statue thing that can eat your party members. He can also turn them into scarecrows, which is a funky little quirk. As far as I can tell, there is a status for poison, one for sleep, one that turns party members into scarecrows (can’t use physical attacks but can use special moves), one that shakes them up (which reduces attack), one that silences them (no special moves), and one that turns them into shrooms, which is the weirdest one since they literally become mushrooms and can’t perform any actions, though they do regain health every turn.

The enemies in the sewer also start to take on more nefarious forms. Beyond the rats, you get Boos and this game’s version of Cheep-Cheeps (called something different for some reason). And then there are Shadows, which are straight-up terrifying. There’s a trend in this game where the busiest enemy designs don’t actually equate to terrifying threats, but they’re certainly cool.

My boss fight with Belome goes far smoother than I would have expected since I leaned heavily on Mario’s Super Jump special, a move that allows me to attack an infinite number of times if I get the timing correct. In fact, there’s a piece of armor in the game that I can only get if I manage to pull off 100 consecutive jumps with this move, a feat I’ve never once accomplished. Still, a few turns with 25+ bounces and Belome is done super quick, which sends Mario and Mallow down the Midas River Rapids.

One thing Super Mario RPG has an abundance of is minigames, and the Midas River Run is where you get a taste for the sort of totally left-field activity in the middle of an otherwise serious encounter. You go straight from a boss battle to a trip down a waterfall, and then ride some barrels while collecting coins. I never really minded the kooky diversions, but the Midas River Run isn’t my favorite (those come later).

Upon riding a barrel to the bottom, I’m in Tadpole Pond and one of many of my favorite encounters of the game. Mallow’s grandfather, Frogfucious, is a wise frog introduced via Lakatu where he “floats” over the pond to see Mario and Mallow. This entire scene with Frogfucious is glorious with more well-executed slapstick and some character-building moments with Mallow discovering that he is not, in fact, a tadpole. They play this moment so masterfully that those looking to create comedy in their games MUST watch this scene to see how to land a joke. Frogfucious delivers the big reveal with a “BUM-BUM!” musical stab as tadpoles swarm instantly to take in the drama. Then there’s a moment of pause to let the comedy sink in before giving Mallow his real motivation: go find your parents.

My final diversion in a very productive session is to create a melody for the composer Toadofsky. One tadpole informs me that he wants to be a famous composer like Toadofsky some day, so he mentions a song with the “do re mi” musical hints. Except I don’t actually read music and this help doesn’t help me much. Still, I write down his full eight-note hint and stumble over to Toadofsky’s section of the pond to try and translate this foreign language to get a present.

I’m pleased to say, I’ve decided not to cheat and just look up the solutions this playthrough, so I’m going analog with a piece of paper and a pen, then doing some trial-and-error to actually put the notes in the correct spots. I was surprised it didn’t take me another hour just to get the song done, but with my first of three membership cards to the exclusive Tadpole Pond item shop, I’m ready to move on.

Next time, we’re heading to the Forest Maze to meet Pinocchio!