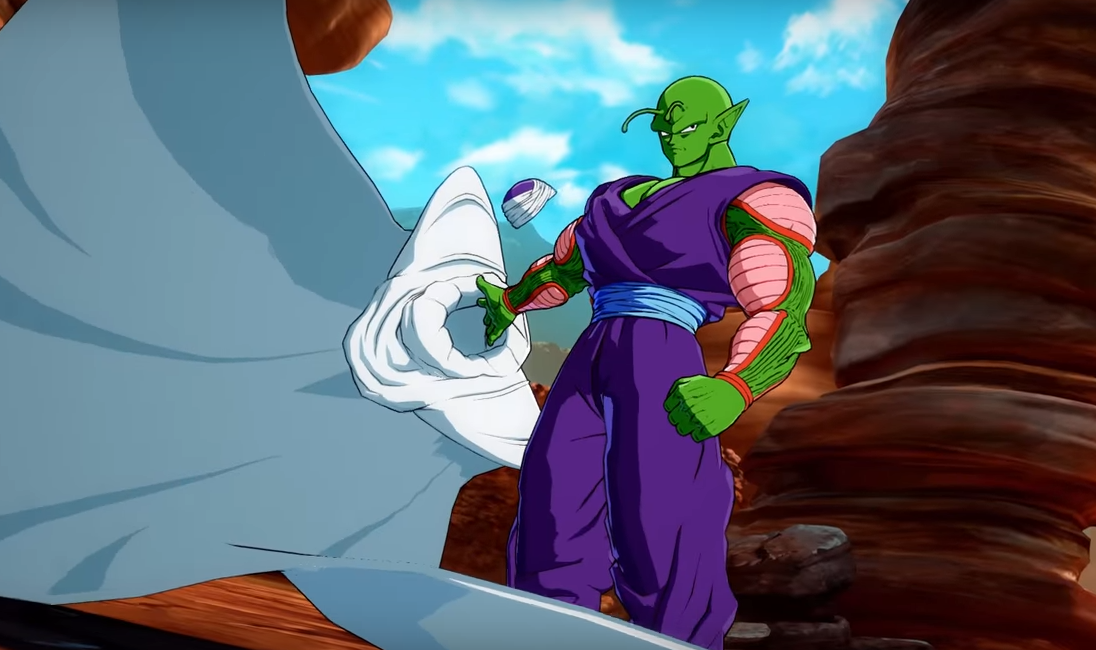 I’m still sick, but I’m also very excited to keep playing Dragon Ball FighterZ. So far selecting a library game for Riding the Backlog has proven wise as I’m on a deadline, meaning I’ve upped my motivation to ride the exercise bike each night. I’ve done three nights in a row so far, but the illness finally caught up to me, sidelining me for the following three nights.

But I’m back in the seat, and my feet are on the pedals! So far while playing Dragon Ball FighterZ, I’ve kept the bike’s resistance at the lowest setting since I just want to enjoy myself. It’s still physical activity, even if it’s not overly challenging. The real challenge has been finding a comfortable way to rest my hands. There’s a lip on the front of the exercise bike meant to hold a phone or tablet, but it isn’t very comfortable to lay your wrists on it for long periods of time. Putting my hands at the top of the bike leans me too far forward, while leaning back has my hands unsupported entirely. The final mainshift solution has been a pillow on the front of the bike, removing the discomfort of the tablet lip. I really am a baby. There’s a reason I like playing as Krillin and Yamcha so much since I feel we’d all get along really well.

This is also the first time I’ve attempted to ride my exercise bike during the daytime while my children are awake and present. My 4-year-old plopped himself on the couch next to me and commentated the whole time, which added a new level of stress to the game with him trying to tell me what he wants me to do without understanding the mechanics of the game. He kept insisting I “grab that guy” when looking at a matchup, pointing at an enemy fighter. Right now I only have Goku, Krillin, Yamcha, Tien, and Majin Buu, while I keep encountering Vegeta, Trunks, Nappa, Captain Ginyu, Piccolo, and Cell. I can only rescue the characters as the plot allows, with Piccolo next up.

Using Piccolo is about like using anyone else. I’m actually not feeling a huge difference between fighters, though here is my current assessment character-by-character:

Super Saiyan Goku is the standard all-arounder. He’s got very reliable combos, a quick ranged attack, and a good final attack where he transforms into Super Saiyan 3 and blasts a giant Kamehameha. Very satisfying finish.

Krillin is very fast and very scrappy, but he’s got some nuances that I’ve yet to get. His main attack is a Destructo Disc, which hits quick enough. His final attack comes from the Saiyan Saga where he shoots a huge (for Krillin) blast up and then rains it down. Satisfying finish against some enemies. But I haven’t been able to properly utilize his After-Image technique or the Solar Flare, and I have absolutely no clue what one attack does where it looks like he lobs a Senzu Bean or a rock or something? It’s weak, it’s thrown in a wonky arc, it’s also his assist, and I have no clue how useful it is.

Yamcha is...Yamcha. He’s not super strong, but he’s unique in that he’s a lot more about close combat. He does have a lot of weird spacing things that I’m not used to where he steps back before delivering the next strike, causing me to lose my flow and break my combo. It is somewhat fun to pull off his ultimate, a final Wolf Fang Fist thing, especially when it’s the final attack to finish a fight in like the caverns stage since it sends the opponent hurling back into a pillar.

Tien was someone I liked playing as initially since he felt pretty strong and had a few powerful energy attacks, but I realized in playing today that his Tribeam attacks actually do damage to him. And not the typical damage, which will replenish when swapping teammates (as is pretty standard with tag-team fighting games). Rather, using the Tribeam takes a portion of his health instantly. Ne recharging, no coming back. Once I figured that out I sort of stopped using him entirely.

Majin Buu quickly became my favorite character in this early portion of the game as he’s a big ol’ boy with big damn fists and a whole lotta pummeling rage. I don’t know if it really does a lot of damage, but it’s delicious to get into his medium attack combo where he throws the opponent to the ground, wails on him for a few hits, and then explodes with his Big Power Attack (you know, where he makes a big damn energy field and says “Buu really, really hate you!”). His standard light attack combo also has a cool callback to him destroying Babidi as after a few hits he’ll grab his opponent by the throat and punch him dead on, which literally exploded Babidi’s head in the anime. Here it just knocks the enemy back, but still, brutal. (Side note, in trying to find the original version of that moment as I saw it, turns out the DB Kai version utterly ruined it. Go find the original devastating Faulconer Funimation version because it’s sort of horrifying and proved that the show was totally for Real Big Boys™). Also, Majin Buu’s ultimate has him turn his opponent to a cookie and eat them, so like TKO.

Finally we get to Piccolo, who...I can’t really tell much of a difference with. It is nice that the game is starting to give me new characters at higher levels than my current team, though that may be a result of me trying to balance everyone and give them equal experience point opportunities. In the Story Mode battles each character has a level that affects their overall health and some other stats to a minor degree. By winning battles your fighters gain experience toward leveling up, with my boys being around levels 6 and 7 now that Piccolo’s on the team.

As mentioned, I don’t feel a ton of special stuff with Piccolo. He’s got the Special Beam Cannon, as expected, both as a combo finisher or as a one-off heavy attack, and his ultimate is the Light Grenade, which is just a big boom. I did have a calendar back in the day with him charging the Light Grenade, which I’d like to think is a somewhat iconic pose for Piccolo. Other than that, he can stretch his arms a little and has an attack where he grabs his opponent from like half a screen away, which would be useful if I could get good with it. It’s just weird to me that the games insist on giving Piccolo stretchy arms, all Lanky Kong style, since he’s hardly used them when fighting in the show. I can only remember maybe once or twice in Dragon Ball where his stretchy arms come into play, but weirdly I haven’t seen any game reference his ability to grow to giant sizes. Might have been useful when fighting Oozaru Gohan, but whatever.

Before finishing my ride, I managed to get one last fighter, Adult Gohan, and instantly enjoyed him best, though not for any real reason. He feels like a pretty standard fighter, though slightly faster than everyone else and slightly stronger. Like a Goku +1, which is appropriate. Whatever the reason, I’ll be sticking with him, Majin Buu, and Goku whenever I need to get in a real fight, which so far hasn’t really happened. None of my opponents in Story Mode have posed any threat whatsoever, owing to half of the fights being tutorial battles, but the computer is finally starting to show a little backbone and block here and there, so we’ll see what happens in the next couple chapters.

Lastly today, I’m finding an extremely aggravating issue with the Xbox One controllers. My friend lent me two, but after grabbing the first one and playing for a bit I learned that the left bumper kept sticking, which messes with character swapping. Not huge, but annoying. I switched to the other controller and thought everything was fine, but now the X button is getting squishy and sticking, which might be more of a problem since the X button is for light attacks, the most-used button in the game. This is my first time using an Xbox One for any extended period of time, and so far I’m really disappointed in the quality of the controllers. I can understand one controller getting wonky, but two? That just sucks.

I’m hoping that my next session involves getting some really different characters and fast, because slowly unlocking characters for Story Mode is getting somewhat tiresome. We’ll find out soon though, won’t we?