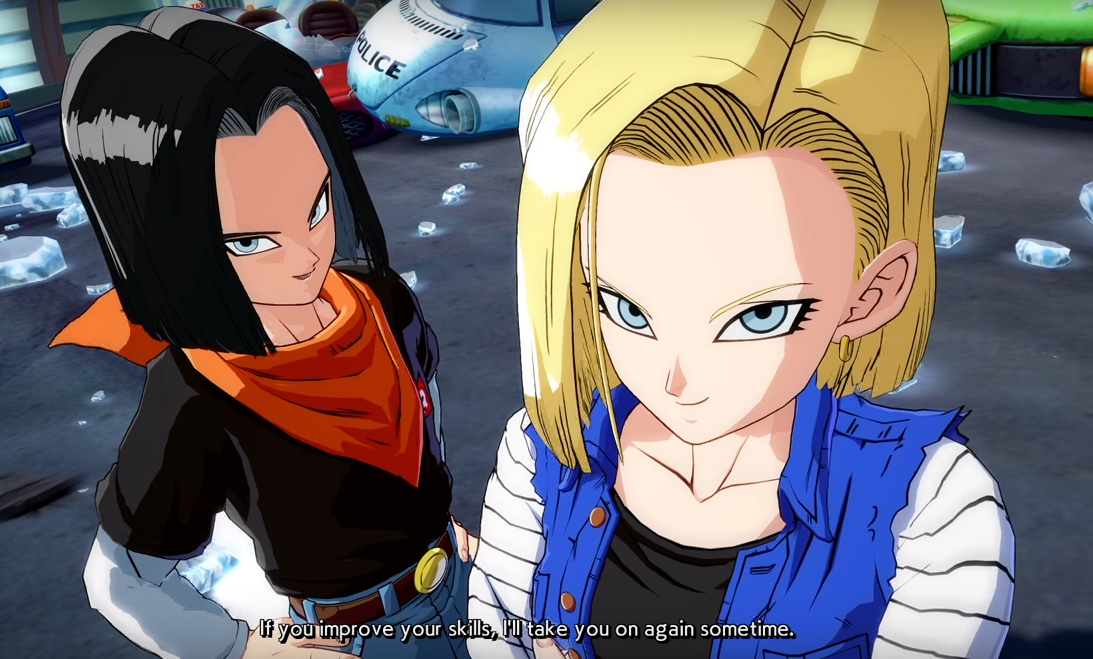 Session 8: The Long Road Ahead

This is it, the final session. Is the game done? No. Is the Story Mode done? No. Am I done with Dragon Ball FighterZ? Yes.

I don’t mean that to be an indication of the game’s quality. Dragon Ball FighterZ is a very good game, one that I could see myself playing for another 40 hours or more and that I would have devoured as a kid since I absolutely did with the Budokai games. The tricky part of this is that Dragon Ball FighterZ doesn’t work for Riding the Backlog anymore since nothing new is happening. However, there’s a little left to talk about, and perhaps a score/recommendation to wrap things up.

My 4-year-old once more played a part in this final session, watching from the sidelines and commenting as I played. He wasn’t quite following the rules of engagement, necessarily, as he knew there was my team (the good guys) and the other team (the bad guys), but which team was which didn’t always register with him. I tried to explain that the bad guys were usually wearing grey and red, the color pallette of all the clone characters, but he still wasn’t tracking and had to repeatedly ask, “Are you the orange guy?”

For the most part, I was. I decided to stop playing around with the characters and stick to a trio that seemed to work best for me, those being Vegeta, Gohan, and Goku. Mostly, all three have quick combos, long-distance ultimates, and can dish out a ton of damage with minimal effort. No weird tricks to master, just straight-forward fighting. Plus, the more I used the characters, the more they began eating the majority of experience points, meaning they leveled up the highest. By the end of the playthrough, Vegeta was sitting at level 21, which seems high but probably isn’t anything extreme considering I need to get him and Goku to 40 to unlock Super Saiyan Blue versions of each.

After about a half hour, I had to cut the session just short of really finishing things as the final map appeared, showing a straight line to Android 21 and a final confrontation. By this point, she’s eaten Nappa, Cell, the Ginyu Force, and Frieza, apparently becoming extremely powerful (or level 36). Since I was so close to the end of this arc, I put things on hold and came back to finish things off sans exercise bike.

Technically, yes, this is cheating. I’ve made it my goal to only play specific games while on the exercise bike, but this was a special circumstance. I at least sat on an exercise ball and rocked back and forth the whole time, engaging my core, then followed up the final battle with some squats and some stuff that generally left my knees hurting. That’s...that’s how exercise works, right?
No, next time I’ll just stick with the exercise bike.

The final lead-up actually turned what’s felt like an extended tutorial into a real battle since the AI apparently woke up and realized it’d been losing this whole time. At last a challenge presented itself! Though still not an extreme challenge, it was enjoyable to finally get a chance to utilize some more strategy to the fights instead of just spamming the same attack combo with Vegeta until the enemy was down. The current battles introduced a need to shift characters to allow others to regain health, or to break up an enemy’s advantage.

Similar to a game like Marvel vs Capcom, the three fighters on your team can pop in to assist in a fight, or they can fully tap in and continue the melee. Taking damage isn’t necessarily representative of damage lost as you’ll take normal damage or blue damage. Blue damage will regenerate if swapped out to rest, so it becomes essential to balance the need to soldier on as one character with the strategy of calling someone else in to allow the first fighter to heal from a particularly big attack. It’s a simple mechanic but I like it and I was glad the first Story Mode arc actually facilitated its use.

After knocking out more clone enemies, I was at last allowed to go head-to-head with Android 21 proper. There’s a funny bit of interaction where Goku halts her from fighting and instead teleports his crew to the World of the Kais to fight somewhere that wouldn’t wreck the Earth. Once she follows, you’re given a greater sense of her power as she keeps powering up. Very typical Dragon Ball stuff here.
I’m actually a little disappointed with Android 21 as a character. She feels a bit too tropey for my liking as her voice actress plays her too bubbly and childlike to have her feel like much of a threat. It doesn’t help that her Majin outfit basically just has her in a bra, emphasizing her physical stature in a way that’s, sure, not out of the ordinary for anime, but still sort of gets me to roll my eyes as a 31-year-old dad. That’s not a knock on people wearing what they want. Wear something comfy, especially if you’re eating Earth’s mightiest warriors and have to battle in a heavenly dimension. Just, you know, maybe not sound like the female version of Gotenks and Majin Buu. The voice actress still did a great job though, I want to emphasize that. She fully committed to the character and I believed that the character was done well for how she was written. I’ve just seen the one-dimensional “I want to fight/destroy/eat everyone” villain from Dragon Ball and would have enjoyed someone with a bit more to her.

Happily, the final fight went in my favor, ending the first arc of Story Mode without a single character KO. It showed my stats and revealed that I’d fought nearly 100 battles, a statistic that surprised me a bit. I’d also only fought Kid Buu five times, a statistic that did not.

Once Goku and the others had completely destroyed Android 21 using their strongest attacks together (really shattering the whole “we can only fight when we’re linked” thing), everything sounds like it’s going to be fine. Then Whis breaks the fourth wall and talks directly to us, the player, slyly saying that it’s a shame there are still mysteries about who Android 21 was and what was really going on. He tells us that he’d love to know if we find anything out before the final arc results are shown and the second arc is revealed, which is a retelling of the story from the villain’s perspective.

There’s a part of me that’s hooked enough to try the next arc, though I’m curious just how many characters I’ll really get to play since the villains (beyond clones) extended to just four. I assume there’s more to it, but it’s still hard to find the exact motivation given the information presented to me. I’m not always a fan of Rashomon-type stories if there doesn’t seem to be a ton to learn outside of what I already know. I don’t really see why it’s a mystery as to Android 21’s motives or origin. We don’t even know much about the origin of Android 16, 17, 18, or 19, so it’s not like discovering that there’s an Android 21 has me going, “Golly! I wonder where this one came from!” I’m going to take a wild guess and say she was...built? Probably taken when she was a full human and modified? That sound about right? And then she got fused with a Majin being and that’s pretty much it? Point is, this game is acting like there’s a lot more mystery when in reality it’s just that it hasn’t told me the supposed essential plot details. Majin Buu was a pink bubble gum monster that wanted to eat everyone and blow up worlds and was made by an evil wizard who was evil. This ain’t Shakespeare, kids.

My final recommendation is an emphatic “go play this.” As much as I’m grousing, it’s because I really like Dragon Ball and want to see it do well, but I also get frustrated with how poor its story direction is always handled. A good character designer is not always a good story designer, change my mind.

But with Dragon Ball FighterZ, the visuals are astonishing in their beauty. Everything looks almost one-to-one with the best the anime has ever produced--better even--and makes playing it a treat. The controls are liquid smooth and bring me immense joy considering how aggravating it was to see the direction Dragon Ball games took after Budokai 3 (more fighters does not always a better game make). As much as I’d like to see more characters in this one, obviously they’re not done adding to it and the characters we do have are solid inclusions. I just wish Beerus was part of the Story Mode. Oh well.

And with that, my ride with Dragon Ball FighterZ ends, and the plans for a new game begin. I’ve done an old-school RPG and a new-school fighting game, so what could be next? Keep watching the Media Sandwich airwaves to fight out!
Labels: blog Riding the Backlog