It's been kind of a relapse week, what with my excessive congratulations to myself over progress. I'm still making it to the gym, but in my quest to not fall asleep on my desk or behind the wheel, I've been practically freebasing sugar and caffeine. It's a real process. I hate that it's a real process. I'm not terribly interested in big meals so much as incessant snacking right now, which tells me that it's largely psychological hunger. I've realized that I snack when I'm stressed or agitated. I eat big meals when I'm physically hungry, but only about one of them a day--everything else is purely mechanical, for basic energy--so it evened out nicely. This last week, I've been doing both, and naturally, the progress has slowed to a halt.

But I'm here. And I'm learning.

Gym time has still been an unexpected source of relief. I suspect that this week's viewing material might have given me a slight bad jolt, owing to the fact that I'm sweating and breathing hard and wiping myself out, all the while watching an excessively emotional program that drains me on that level. Yeah, this might have been a mistake. I just figured a sports show might be just the ticket to pick up my pace a little. Turns out, crying shows instead leave you with a sense of added weight.

See what I did there? Weight.

Other than that, it's been a week of challenges. Primarily, I've been challenged to stay awake and I've largely failed. I've been nodding out like a junkie lately after work, and it makes my mornings hazy and my afternoons endless. That's the week's mood: tired as hell, operating mostly off of chutzpah. The up side is that I don't have the energy to be overwhelmed by anxiety! The downside is that anxiety sometimes is my coffee; I'm capable of using my anxious nature as a mechanism to get things done. I over-inflate the importance of deadlines in my head so that I will get off my butt, I schedule things hour-by-hour so that I can follow a checklist, and I reward and punish myself based on completely arbitrary and imaginary criteria. Sometimes, that's a real pisser, and it makes me a very unpleasant person to deal with. But if you take it away, there's a good chance that I kick up my heels and decide that nacho fries are a good idea, and that I definitely deserve the gigantic 24-ounce energy drink, because the regular 16-ounce one only have seventeen scoops of sugar in it, and I'm a special boy. 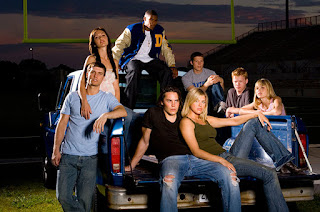 A little background on this: just after Christmas, a family member dropped the entire series DVD boxset in my lap and said, "I got this as a gift. You watch it and tell me if I'll like it." So, I gave that set right back, because the whole series is on Hulu and...that's like twenty-five discs, Jackson! Holy cow, seems insurmountable. Little did I know I'd get through the entire 22-episode first season within a week.

I'm not going to mince words: this television program has a very strange effect on me. Intellectually, I see this show as a very specific melding of a lot of tried and true formulas and cliches that happens to work because of its cast. On a totally different level, "Friday Night Lights" has turned me into an elderly woman watching her "stories" about the pretty football boys and whether or not they will make it to the all-important State Finals. It's a prime time soap opera that captures the teen relevance that "The OC" enjoyed, with the added structure and stakes of small town football politics. It's a very real, very detailed world, and it adds a level of urgency and moral quandary to the already complicated experience of being a teen in ultra-traditional (re: extremely Christian and white) middle America.

The film version of Friday Night Lights sought to expose West Texas high school football culture in a documentary style, while Varsity Blues sought to glorify it in a real glossy American Pie "boys will be boys" way. While the pilot episode keeps the jiggly handheld camera with dust all over the lens, the faux-realism gives way to a more traditional single-camera drama formatting after that. The pilot also seeks to highlight the sometimes uncomfortable linking in this culture of God and organized sports. There are no less than four huddle prayers in the first hour, and the lack of a literal miracle or angel's appearance by the end seemed like an editing error. While the season reduces this considerably, it's an interesting thread that I'm sure was never in danger of being explored in its full depth. This family-friendly, "Dawson's Creek" style of adaptation isn't interested in crossing any boundaries. It's not even terribly interested in depicting the seedy underbelly of the setting or how it all works, relegating steroid-taking decisions, spinal injury, and the complete erosion of public education in the face of football as character-specific plots, rather than depicting these as symptoms of a rotten system.

That might actually be a blessing. The pilot's harder edges would make for a much more daring, smarter show, but it would be entirely unpleasant to watch. The reason "Friday Night Lights" does not hit very hard on its subject is obviously because it's a show aimed at teens, and teens don't need to watch a show about how totally buffalo'ed their small society is. So, the soap opera instincts kick in, and it becomes a show mostly about the characters. Their situations are all dusty antiques: unplanned pregnancy, scholarships hanging in the balance, scouts in the stands, substance abuse, lineup hierarchy, absentee parents...the fun of the watch is seeing how they react to it all. Even if you've never touched a football field, or even watched a game, you can relate to these characters. To them, as to all teens, every situation is life-or-death and it is entirely unfair the amount of pressure and miraculous results are expected of them.

But like I said, the main reason this is oddly captivating even to my black, cynical heart is because the cast properly sells their performances, even the clearly 25-30 year old actors forced to play sophomores at age 16. The show tries its damnedest to center on Coach Eric Taylor, the bastion of moral superiority who uses the magic of football coach platitudes to guide the mythical Dillon Panthers and their various hangers-on. Kyle Chandler really sinks his teeth into the bland spaghetti dinner that is this character. He's the most straight-laced man in Texas, and in the last election he likely wrote in Roger Staubach. Quite often, however, the show will tilt on an axis of tension regarding the Coach and his decisions, making him akin to the President Bartlett character on "The West Wing," an openly benevolent leader whose emotions dictate the energy and plot thread of the show, but ultimately acts as the even keel. The drama comes from the players, and Taylor Kitsch and Gaius Charles lead the pack as the smoldering, complicated anti-hero types who behave boorishly, maintain gigantic chips on their shoulders, act entitled, and ultimately are big sensitive boys who drop their tough act near that final commercial break when their dad trauma or secret addictions surface. Major props go to Connie Britton, Minka Kelly, and Adrianne Palicki as the female leads, whose characters all seem stuck between actual agency and mere utility for most of Season 1. I have every faith that further seasons, all smartly compressed into 10-12 episodes instead of 22, will make better economy of the cast and give the ladies more to do. Britton, as the Coach's long-suffering wife, could easily be the focus of the show much in the same way Robin Wright's character on "House of Cards" is far more compelling than the man she played sidekick to.

I have a lot of complicated feelings about "Friday Night Lights," and I think that's a sure sign that it's a genuinely good show, as long as you can circumvent how network-y and smoothed down its edges are. Maybe that actually is just as intentional as the mottled grey skies that blanket all of the de-saturated photography of an October weekday practice on the show. By grinding this honest, sometimes painful and maudlin story down to a market-tested melodrama aimed at young teens, it helps to capture the podunk atmosphere, where a missed tackle on the football field or someone's boyfriend buying condoms might become next week's feverish scandal amongst the entire town. I'd almost suspect that the tide-like predictability of each teen subplot is actually a sly, cynical joke at the expense of the genre. But then again, I'm watching this as a 30-year-old man. When this show first aired, I was an 18-year-old high school football quitter, and certainly would have taken it as seriously as possible. I can't explain why it satisfies an itch now, but it does. I suspect it's the part of my brain that will never outgrow high school, that will always understand the very young, very narrow view of the world where every moment of your experience is...just, so extra.

I recommend the show to anyone who has that same itch, or anyone who has an understanding of the very human romanticism of sports. This is one of those mass-market products that is universally approved and remains popular for a legitimate reason. It sometimes feels like junk-food television, but I certainly feel less guilt about getting misty-eyed about high school than I do watching Gordon Ramsay scream F-bombs at Culinary Institute grads.