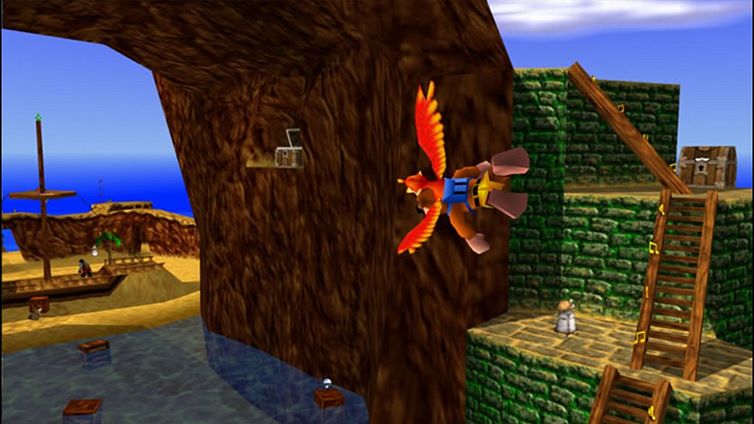 Just like revisiting a nostalgic game, getting yourself to exercise more regularly can involve a lot of mental gymnastics and deal-making. In the case of Banjo-Kazooie, I’m more than ready to continue playing through for a full 100% completion, whereas getting onto an exercise bike again so quickly has me less motivated. The struggle continues, but my love of the bear and bird combo wins out, sending me back into Banjo-Kazooie.

Now that I’ve shaken the dust off and become acclimated to the Xbox controls, things are picking up steam. Mumbo’s Mountain was simple enough, while Treasure Trove Cove has me wondering just how quickly things ramp up. My memory will always betray me with this game, convincing me that it is much longer and more vast than it actually is. However, I’m not misremembering Treasure Trove Cove. It adds a ton of new variety and introduces a pair of new important and game-defining moves, giving me plenty of hope for the worlds to come.

The shape of Treasure Trove Cove is much different from Mumbo’s Mountain. MM was pretty much just one linear path that sloped up and then slid back down to the beginning. TTC instead is one large space with a handful of important landmarks, mostly broken into two islands connected by a large arch in the middle and surrounded by ocean.

One of the first things you’ll likely do when you warp into the world is notice a Jinjo underwater right underneath the starting dock. Hopping into the water introduces us to Snacker, a shark that spawns immediately upon entering any sea water, along with the classic “dun-dun dun-dun” shark attack themed music. While not overly threatening, Snacker forces the player to stay constantly moving in the water and plan out the quickest route to any location. He can’t be killed (yet) but he also doesn’t really do a ton of damage, though the threat looms as always, even if it sort of breaks the immersion that he disappears in a fade away and reappears with a fade in constantly.

With TTC you’re able to either head straight in and explore the area around a pirate ship, go right and find a submerged sand castle, or go left and encounter Nipper the giant hermit crab. I opted to knock out Nipper, which is another fairly simple boss battle only slightly more involved than the one against Conga in Mumbo’s Mountain. As a giant hermit crab, he snips at you with his claws before taking a rest and letting you peck him in the eyes. Do that three times and he lets you go inside his shell to take his Jiggy.

Something I didn’t mention last time that really differentiated Banjo-Kazooie from Super Mario 64 at the time was that acquiring a Jiggy had the duo perform a little dance and then continue on through the stage rather than dancing and then transitioning out of the stage, making you re-enter to continue. On one hand, this makes worlds feel smaller by comparison as you’re not going through them more than once. On the other, this saves a ton of tedious time and lets worlds stay more varied.

Not long after beating Nipper, I went ahead and learned how to use the Shock Jump Spring move, performed only on Shock Jump pads. This is a really high jump with Kazooie using her legs as a powerful spring to launch the pair skyward, though it can only be activated on said contextual pads, making it obvious where you’ll use the technique.

Littered around Treasure Trove Cove are some chompy treasure chests that open and close, giving you just enough time to do a somersault jump in and out of them between chomps. The timing takes some getting used to, and the spacing since the bottom row of teeth tend to damage you on the upward flip, a bit of a frustration when learning or relearning the timing. They’re a nice thematic element to the treasure-themed world though.

With some basic exploring taken care of, I decided it was time to head into that submerged sand castle, which means plugging Leaky the bucket using a couple of pooped eggs. A simple puzzle which leads to another simple puzzle. Leaky magically drains the little pool, letting Banjo and Kazooie enter the sand castle, which contains a single chamber full of letters on the ground and the words “BANJO-KAZOOIE” on the wall. It doesn’t take a genius to figure out what you’re supposed to do here, namely spell out the game’s title by stomping on the letters in order, but there’s a lot more to this room for any diehard fans.

Once you’ve attained the Jiggy in the sand castle, you’re able to use this letter floor to enter cheats, done by stomping the word “CHEAT” and then meticulously spelling the cheat phrase, for instance “GIVE THE BEAR LOTS OF AIR” granted infinite air. This was also the only way to obtain the infamous Stop n’ Swap items, which I’ll get into during a later session.

Also of note in the sand castle, there’s a menacing black and red crab that snips sideways after you when you complete the original challenge. Similar to the green crabs all around the cove, this crab is easily knocked over and then beaten, or just stomped once before dying. I never noticed it as a kid, but looking back now, oh my god, killing the crabs is super graphic. Sure, it’s all cartoony and E-rated and safe and all that, but when you stomp on these crabs, they don’t just comically flatten and disappear. No, they explode, showering the area with their limbs before disappearing. A lot of the enemies do that, getting broken into pieces and dismembered when they die, which is made even more gruesome when some of them deliver some basic dialogue during a first encounter, emphasizing that these are sentient creatures you’re destroying.

Another bit about this game that’s interesting is how it borrows some elements from Super Mario 64 without grabbing some of the most dynamic movement options, namely the wall jump or long jump techniques. While Super Mario 64 emphasized platforming in a 3D space, Banjo-Kazooie instead emphasizes a world’s theming and possible encounters.

For instance, in Treasure Trove Cove, the pirate ship is named the Salty Hippo and captained by Cap’n Blubber, himself a hippo who happens to be blubbering when you first meet him. In his burping dialect, he says that the treasure in his ship is trapped underwater and that he can’t get it anymore for some reason, so after Kazooie makes some snide comments, you retrieve both piles of his gold, making him happy and ready to spend, spend, spend.

The last element of Treasure Trove Cove I interact with is the ability to fly, learning how to use the flight pads to shoot into the air and flap around. It’s a simple ability that comes into play a lot more later, but for now it lets me traverse the area a bit faster and access the lighthouse at the top of the cove. That’s another 10 Jiggies, 100 music notes, two extra honeycombs, five Jinjos, and a Witch Switch pressed to get a bonus Jiggy right outside the world’s entrance.

From here Gruntilda’s lair can become slightly more confusing for a first-time player since you can open the path to either Clanker’s Cavern or Bubblegloop Swamp. I opt for Clanker’s Cavern since that’s canonically the third world and I’m a slave to canon. Join me next time when we swim inside a big metal shark!
Labels: blog Riding the Backlog