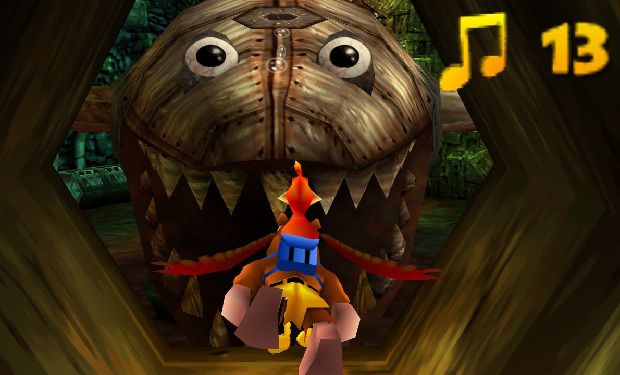 Christmas is finally over! Hooray! Fun fact about this series, I write all sessions in a row before posting anything, so as of session 3 I’m sitting here comfortably on December 26th, safely on a little holiday vacation to recharge and play some games.

With Banjo-Kazooie, I’m curious which world will ultimately come out on top as my favorite. With only two world to judge from fresh, Treasure Trove Cove edges out Mumbo’s Mountain on account of MM being little more than the training wheels course. Today though we dive into Clanker’s Cavern, the game’s first water world, which are not usually remembered very favorably. Let’s see how it holds up!

But before that, I should make a side note to talk about the Game Over cutscene. I haven’t actually experienced a Game Over yet, but whenever you quit the game through the proper channels you’ll get a Game Over anyway, which seems like a weird sort of insult. “Oh, you wanted to stop playing and didn’t just shut the console off? Great, here, you lose.” The scene shows Gruntilda activating her cuteness-extracting machine, taking everything that makes Tooty pleasant and making herself look--for lack of a couth way to say this--hot. She even gets the stereotypical 90s hot girl accent instead of her grunty, cackly accent and Mumbo rushes in to hit on her. Then Tooty stumbles out of her chamber looking monstrous and green as the words Game Over fade in. So 90s.

Into Clanker’s Cavern, it shouldn’t be shocking to find a character named Clanker, which is a huge mechanical shark or whale or great fish. It has gills, sharp teeth, and a blowhole. It’s also made of metal but has patches of gnarled flesh. Clanker is a strange design, but not a bad one since obviously it’s memorable, proven by me remembering it very clearly.

The first little area before even seeing Clanker introduces you to the world’s aesthetic. Everything is dank and grim, with a sickly green tinge to things and rusty grey pipes everywhere. Get used to those pipes as half of everything you’ll do involves climping pipes, jumping around pipes, swimming through pipes, and smashing grates on pipes. Pipes as far as the eye can see (or the draw distance, rather).

Exploring the pipes immediately around you shows some grates with holes in the middle where some sort of drain monsters come out and chomp at you. My muscle memory from childhood kicked in, meaning I approached each of these with an immediate aerial attack, killing the enemies right as they grunt and pop out.

Perhaps the biggest aspect of Clanker’s Cavern is the amount of swimming you’ll end up doing. The starting area leads you straight toward a little pool that you have to dive underwater and swim through, spitting you out into the central cavern and forcing you face-to-face with Clanker. The first reaction may be shock or fear since this is a huge and imposing creature, but Clanker’s harmless.

Swimming however is a bit more where the imposition rests. Much like Super Mario 64 (comparisons are unavoidable so just roll with it), Banjo-Kazooie’s swimming mechanics involve air management and the ability to either swim quickly or precisely. What’s different is Banjo-Kazooie has an air meter that appears when underwater whereas Super Mario 64 used the health bar doubled as the air meter. The only way to replenish it in Banjo-Kazooie is to obtain air, either through bubbles or just resurfacing. I don’t really mind the swimming mechanics here since the game doesn’t feature a ton of swimming past this one water-based world.

You will, however, get a lot out of the swimming mechanic here considering that you’ll have to swim down some side pipes to access other little areas. Either you’ll simply swim through some pipes that lead in a circle, or you’ll come to a dead-end and have to turn around, giving you just enough air to reach the end and dash back to the surface.

One of these side chambers includes a basic fight against a handful of mutant Snippets, the little crab enemies of the game. They’re no stronger than the regular variety and don’t have any new attacks or attack patterns or anything. Rather, they just have a larger eye and a larger claw and they have a hiss in their dialogue. Stomping the four rewards me with a Jiggy because ew, mutants!

Up above Clanker’s main area are more pipes that contain some Jiggies, Mumbo Tokens (necessary for paying Mumbo for transformations), music notes, and extra lives. There’s also a little platforming challenge that you’ll see repeat in other spots, a sort of in-and-out jumping pattern where you have to jump into a hole in the wall, then out and around to the next hole, made possible by the second flap jump Kazooie offers. It’s not hard to pull off but it does feel surprisingly satisfying to do.

Back down to the water, it’s time to help Clanker. When you first meet him, he mentions that he’d love to be out of the garbage water where he can get some fresh air, but he’s chained up, meaning you have to swim to the very bottom of the pool to loosen his chain, done by swimming through the holes of a big key three times. This is probably where most players will drown for the first time since they’ll want to push through the risk and finish the task at hand. At least a fish swims around the key and blows bubbles, meaning you don’t have to swim down to the key then back up to the surface three times.

Once Clanker is able to surface, more of the stage opens up. Some music notes are up on his back and his fins act as platforms that let you get to new platforms to explore higher up above. He also shoots a big bolt out of his blowhole that lets you reach some of the upper platforms. It’s a simple little change that feels fairly dynamic since a lot of new options present themselves.

One such option is the ability to go inside Clanker, usually through his mouth. He mentions that he teeth hurt from all the garbage he has to eat as Gruntilda’s garbage disposal, remedied by a few well-placed egg shots to his two golden teeth. When you shoot a tooth in, you can swim into his mouth from there, showing a new creepy interior that has a lot of meaty textures all over. It’s like Jabu-Jabu’s Belly except somehow more unsettling.

Also inside Clanker are these wiggly little tendrils that flail around, making it harder to swim. These are gross and I appreciate them. Clanker is also surprisingly small. Obviously much larger than he looks from the outside, but quite a bit smaller than an inside-a-fish area in a game.

Really the only large area is his stomach, a chamber showing his ribs and containing another small pool of water along with some striped hoops. The challenge here is to jump through the first green-striped hoop and then through each new green-striped hoop as it’s highlighted, all done in 45 seconds. This feels like a section where a minor character would pop up and ask you to do this arbitrary thing, but instead it’s just presented for the player to figure out. I’m not complaining, but it feels odd and keeps Kazooie fairly quiet this whole world.
The last new feature to Clanker’s Cavern is the invincibility feathers, golden feathers that let Kazooie keep Banjo from harm until they run out. It’s a useful move since it can be used anywhere, including right as you jump into water, meaning you can actually kill Snacker in Treasure Trove Cove by using the Wonderwing technique and jump right on him.

Finishing Clanker’s Cavern adds another 10 Jiggies, 100 music notes, five Jinjos, and two more honeycomb chambers to my totals. And hey, with six total honeycomb chambers, I’m able to increase my maximum health by one! Not super critical but always welcome to feel like I’m progressing.

I also noticed while checking my totals that I have precise times listed for total time in each world. Mumbo’s Mountain only took me about 18 minutes to complete while both Treasure Trove Cove and Clanker’s Cavern came in at roughly a half hour each. Next time I wade into Bubblegloop Swamp. How long will it take me to complete that? We’ll have to find out!
Labels: blog Riding the Backlog