Bite my pie into pieces, this is my last resort...

I'm going to keep this rather brief. It's been a somewhat sedated, depressive week. I made it to the gym more often than not, but some combination of rotten weather, lots of pressure at work, and increasingly introverted behavior has caused the snacking to continue. There's just some deep-seated evolutionary remainder, an instinct to hibernate and build a den of lovely cheeses and cakes to keep me company. I've gone Hobbit for the winter.

Now that I've come out of a few days of sulking and immobility and see the light at the end of the tunnel that has been this week--and indeed, the month of January itself--I feel a lot better about this backsliding than I would have before. After all, I started this whole endeavor last March, after the weather had changed. I simply forgot to adjust my expectations. It's a whole different ballgame trying to do this thing without ever seeing the sun, and while surrounded by everyone's favorite heavy comfort foods and rich desserts for several months. It's easy to feel alive and crave vibrant green vegetables in June. January, however? I'm not interested unless there's a minimum amount of gravy.

I'm sure that once the rest of the country thaws and lawnmowers and barbecues come out again, I'll be right back at it. I have a jaunty, I've-totally-got-this mentality once all my favorite things start to come back: camping, baseball, summer movies, the beach. It feels more like life to me. And unfortunately, I just have to be patient with myself, because we're in for a few more weeks of waiting. And the waiting room has coffee and donuts. So...yeah, it's going to be a lot of guilt-munching, a lot of couch therapy. But I'm cool with that, because one thing I'm trying really hard on this year is letting myself off the hook, on occasion. Let's face it, if I happen to have a psychobilly freakout, it's likely because I've worked one up in my head that's not even real. I'm responsible for myself, no one can do the work for me to lose weight and live better, so I tend to craft artificial rules and structure for myself, and I'm not nice to myself when I step out of line. I should probably remember more often that the rules are my rules, I make them up.

New rule: if the choice is between a Hostess fruit pie or a nervous breakdown, I will take a marionberry, please. 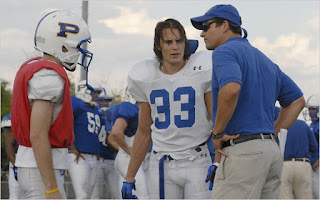 All I had ever heard about "Friday Night Lights" before watching was that it was fantastic television, apart from a really stupid murder subplot in the second season that is very quickly abandoned and stricken from the record. That almost sounds like a joke, that the slightly more Jesus-loving "Dawson's Creek" for jock-bros would actually stoop to a secret murder storyline so quickly. But that's Season 2 of "Friday Night Lights," and much like every other show in Fall of 2007, we're probably just lucky the WGA strike didn't kill the series outright. Remember "Heroes" Season 2? Remember how compressed, sloppy, needlessly expensive, and exhaustingly filled with new characters it was? Yep. Yep. Yep. Mmm-hmm.

Season 2 is also a lot lighter on actual football than it is on all the extra stuff that comes with football. Pep rallies, fundraisers, practices, college recruiters. But the show came back from the writer strike with a firm grasp on the personal drama and a heaping mountain of characters to juggle; it's only natural to cut the budget and focus on relationships. That's fine, the relationship drama is the real meat of the series, but the Dillion Panthers' on-field adventures always make for a satisfying concentration point of all the ongoing problems and secrets and broken hearts and screaming matches that precede it. Taking away the football from the football show is one thing, but taking away the natural climax and resolution of the week is like an unresolved melody, a held-in sneeze. The show manages to put that old chestnut "good is the enemy of great" into the mouth of not any coach or football player, but the dreamy English teacher. "Friday Night Lights" with half the amount of last-ten-minutes-of-the-episode football drama is perfectly good, just not great.

Another "good" that trips up "great," the season suffers from a bloated cast. Among new recurring regulars within the first half of Season 2 are new player Santiago, the Saracen house's in-home nurse Carlotta, Landry's dad, two new male schoolteachers who have no interest in football (in Dillon?!), Tami's sister, Smash's new girlfriend/manager...this is just in the first seven episodes, and that's without losing almost any of Season 1's supporting cast. Now, mind you, the new characters are far more seamlessly integrated into the show than other series' late additions. It makes this show a sprawling ensemble, which is preferable now that it is clear the younger cast can carry the show without having to center it on Kyle Chandler's Coach Taylor. But then again, it also is a lot to add to a show that also is dropping back from twenty-two episodes to fifteen or less per season. And it means skewed storytelling priorities, and a tendency to abandon any plot that might get lost in the weeds.

Chief example: Landry's murder of Tyra's rapist takes over the entire season, and it's such a calculated misstep for the writing team of "Friday Night Lights" to give such gigantic stakes to a plot line that has been shuffled to the back time and again. This is a problem that bled over from Season 1, too. Tyra's coming to grips with her attack in those last episodes has a smack of "we don't have anything for her to do now that she's not a girlfriend," and it was presented as oddly inconsequential in the face of the all-important State Championship. Here, the plot itself has ramped up to maximum consequences and gets a ton of screen time, but we still cut away from it to go see what Tim Riggins is drinking right now. How am I supposed to care about which of a dozen fantastic schools Smash Williams chooses to go to for free? "Meth Damon" killed a guy. This--look, I'm sorry--this is the plot of the show until it is resolved. Everyone else in Dillon, Texas is merely scenery for this modestly engaging crime thriller that y'all have written yourselves into by accident. You cannot have an uplifting story about triumph over adversary in a podunk high school with this dark shit going on in the background. It doesn't work that way. Not to mention how Tyra gets short-shrifted and relegated to being a supporting player in Landry's story. That would be frustrating enough, if Landry's story doesn't end in a complete anticlimax and never gets spoken of again, but that's apparently what happens.

In the wake of Julie and Matt's split, Aimee Teegarden is similarly re-positioned within the show, largely as the sobbing inconvenience of an adversary for both of her parents. While Connie Britton, as Tami, is given a postpartum anxiety arc that is surprisingly restrained, heartbreaking, and subtle (or maybe just effectively layered underneath all the character's other ongoing problems) Julie gets to cry. Like, every episode. Teegarden is great, she's a very natural performer much like Zach Gilford is as Matt, which is why their romance was so sweet and organic. So, I hate the fact that they are broken up mostly so Matt can juggle two other women and Julie can cry. Like, a lot.

I didn't hate the season, mind you. It's a definite sophomore slump, but still has a lot of heart, and the atmosphere of a didactic after-school special has been properly smoothed down. While Season 1 was tasked with building an audience's affection for the characters, and their investment in silly football politics, this second year is about fine-tuning the tone of the show. Coach Taylor and Tami's bantering partnership was one of the most winning aspects of the early episodes, and wisely has become the keystone for dialogue, rather than the blustering "for the Gipper" locker room speechifying. There are more visible overarching themes of community, trust, responsibility, and respect. And though the lack of actual football didn't sit well with me, it's worth noting that Season 2 is where "Friday Night Lights" stopped pretending to be about football at all.

-I cannot praise enough the location scouting for this show. Famously, Peter Berg stipulated when adapting his film for TV that the show must be shot in Texas, and that decision might be one of the biggest reasons this show works. It's dripping with authenticity, which helps to lend credibility to the melodrama.

-Folks who write Taylor Kitsch off as a wooden actor have plenty of evidence, but clearly have never considered that Tim Riggins is just a very accurate portrait of a very wooden person. Kitsch is playing with the character more and more as the show wears on, slowly letting the funny, gentle giant emerge from the surly, beer-soaked goon. I like Kitsch, I want good things for him.

-If one more high-schooler kisses a thirty-year-old adult on this show, I legally have to call social services.

-Matt's nervous banter with the new cheerleader, including his hasty "Why you hittin' me?" to his buddies who are razzing him, is some great natural acting from Zach Gilford.

-Riggins moving in with an underwear-clad meth cooker for a bit is really funny when you consider that Jesse Plemons is the one who went on to "Breaking Bad." But shockingly, I think FNL might have a more realistic portrayal of the meth-cook lifestyle...it's gross.

-For the love of Pete, Matt Saracen...Stop. Taking. Advice. From. Smash. The man is a clown.

-Series creator Peter Berg's appearance in the finale as sleazy real estate cowboy Mo is...well, it's something else.