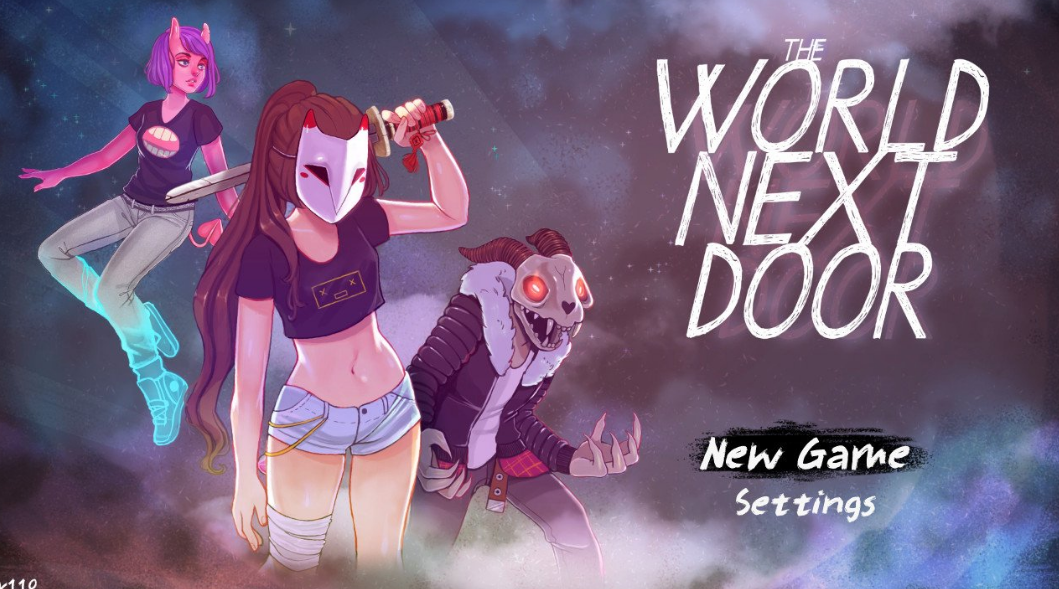 I’m a Portland native. This is important to the review, I swear since The World Next Door is also a Portland native. Coming from Rose City Games, TWND is a unique and weird little indie title that’s somewhat tricky to describe to someone, but is immediately understood when playing. I got a chance to try it out during the Portland Retro Gaming Expo last October and have been eagerly awaiting the full release. It’s out now, so was it worth the wait? Let’s find out!

Full disclosure here, I can’t be unbiased. I know, you’re crushed that the esteemed and hallowed name of Media Sandwich could be rife with corruption, but hometown advantage is going to play heavily into my overall feelings of this game. I have a vested interest in seeing the Portland indie game scene do well, and so I am actively rooting for The World Next Door to catch on like Gone Home and Tacoma, two other Portland-developed indie titles. I’ve also formed casual friendships with some of the devs at Rose City Games, including attending PIGSquad (Portland Indie Game Squad) meetings. I even engaged in a back-and-forth gif thread with the official The World Next Door Twitter handle the night before launch. In short, I am going in wanting to like this game.

Now that I’ve played it, I’ll get right to the point: The World Next Door is well worth a casual playthrough, though is not without some rough spots. 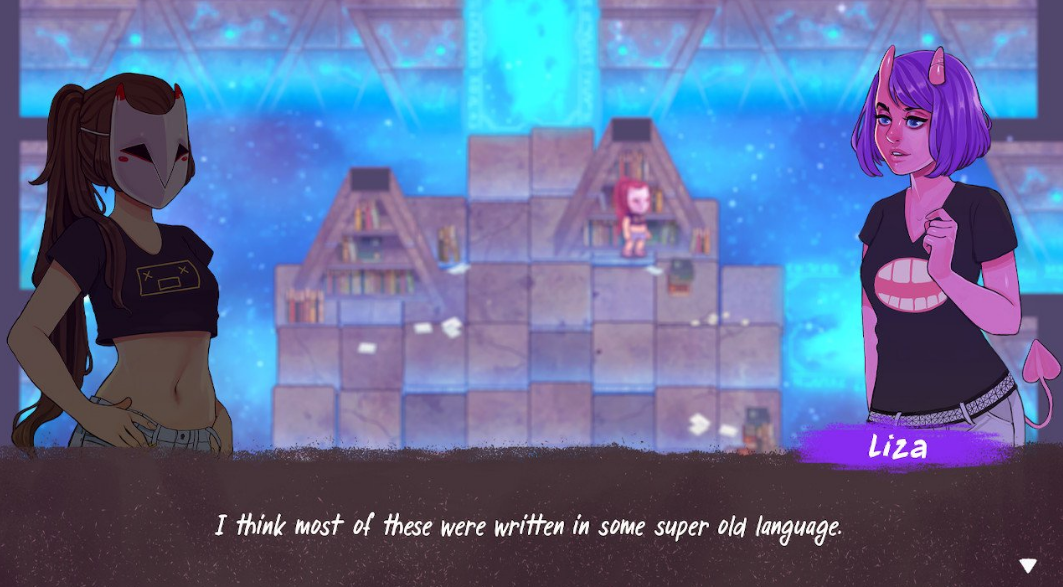 OK, let’s swing back to the beginning and justify that statement up there. To start with, you’ll need some context for what TWND actually is. It is a...puzzle...battler...visual novel? Kind of? Maybe the story will explain things.

You play as Jun, a human in a world of magic called Emrys. Earth and Emrys are parallel worlds and once a year during a special convergence festival, humans who’ve won a special lottery can travel to Emrys. Jun is the lottery winner and meets with her online friend Liza, a demon spirit from Emrys, along with a larger cast of characters including Horace a horned-skull punk, Rainy, a water drake, and Cerisse, a pegasus/unicorn person. While exploring a mysterious shrine, the group loses track of time and fails to make it back to the portal, trapping Jun on Emrys. Because of the world’s magic, humans can’t survive on Emrys for long, so the gang has to find a way to get Jun home before she dies.

I like this simple plot, made all the more powerful by the game’s very good writing. Each of the characters feels correctly written as they’re all around 17-years-old, so they come off as brash, shy, obnoxious, overly clever, or stupid as the situation arises. No one feels like they’re holding the stupid ball, and no one does anything that makes me stop and say, “Whoa, there it is, the thing that reminds me I’m in a video game.” Nah, I like these characters and would gladly see more of them. 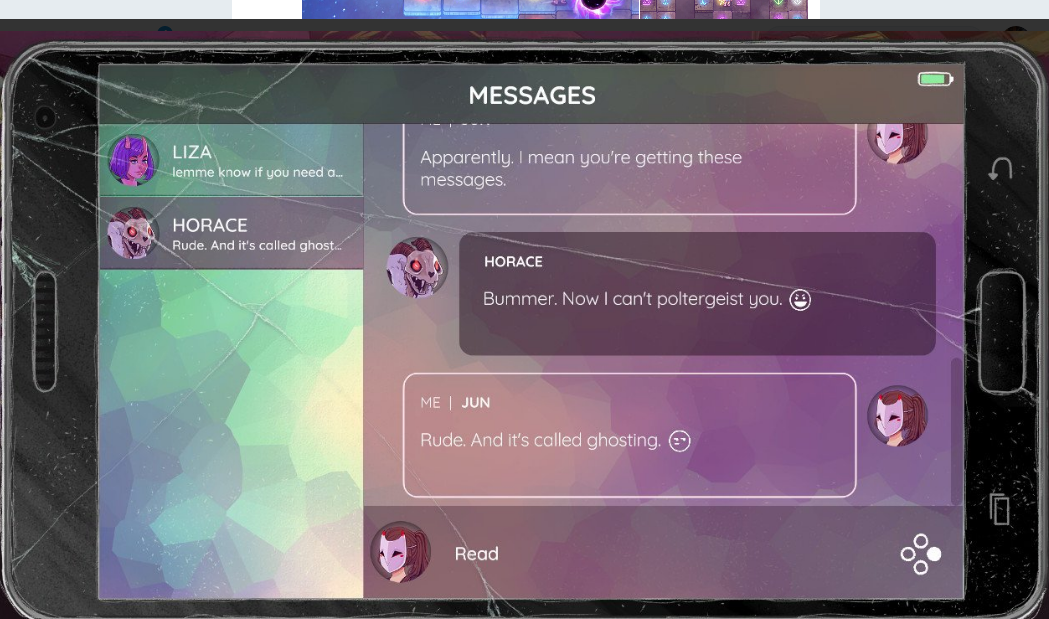 As it turns out, most of your experience with The World Next Door will be spent communicating with your friends, hence where the visual novel aspect comes into play. As Jun, you can shift the direction of conversations slightly depending on your responses, and at the beginning of each day you have enough time to text three friends to get some more character interactions. I really like this small detail, especially since the phone Jun uses as an overall menu HUD looks like a realistic phone, cracked screen and all.

Here’s one little nit-pick though: you are able to view profiles about the main characters, but none of the side characters that you’ll meet. I enjoyed the profiles so much that I wanted more of it. A more complete glossary/bio would be great, especially considering how unique all of the characters are.

Explaining the actual gameplay is where things get messy. You make your way through a handful of shrines where you’ll encounter enemies called Grievances. The only way to attack these is by activating magical runes on the floor, laid out in a grid. Matching three or more like-runes and then activating them allows you to do an attack slash, shoot a fireball, create a blackhole, shock enemies, or heal. 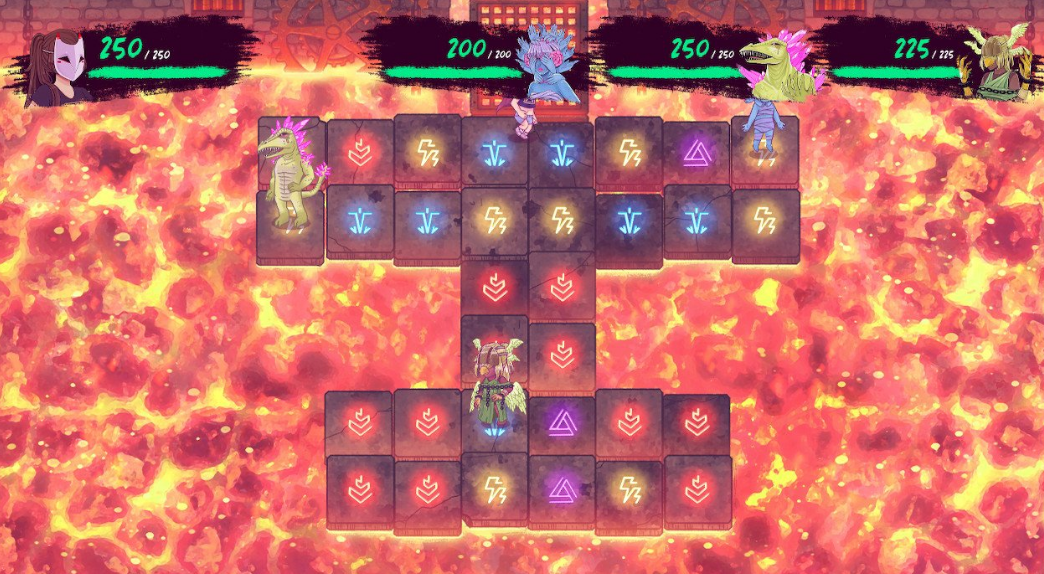 Minor hiccups aside, I never ran into any moments where the controls didn’t work perfectly fine. A lot of what you have to get used to is that one button is used to pick up and drop runes, and another is used to activate them. Sometimes in a rush you’ll be moving a rune and then accidentally press the activate button, which breaks the tether used to move a rune and ultimately causes you to fail your attack. The punishment for a game over is extremely minimal, and the game even offers a mode purely for the story where Jun doesn’t take damage at all, so I have no issues with the controls.

Back to the story, I was legitimately impressed with the way the game handled some otherwise touchy moments. There are some plot twists that caught me off guard, and some plot elements that would have had me rolling my eyes in lesser games. For instance, late in the game a character appears to be in danger of becoming a Grievance, which should feel melodramatic. However, because the game had done such a strong job of making me like and care about these characters, I legitimately panicked and wanted to save this character from turning into just another enemy that I’d have to kill. I can’t speak highly enough of the character design and writing.

Here’s a minor tangent though: the characters all have the flavor voice effects to convey what their voices sound like. Similar to Animal Crossing, they only speak in short emotional sound clips, always in a made-up language. However, you can watch a TV in the marketplace where a fully voiced character talks about the day’s headlines, and it has a weird contrast to the rest of the game where none of the main characters verbally speak English. This is weird and meaningless but it stuck out in my head enough to mention it. 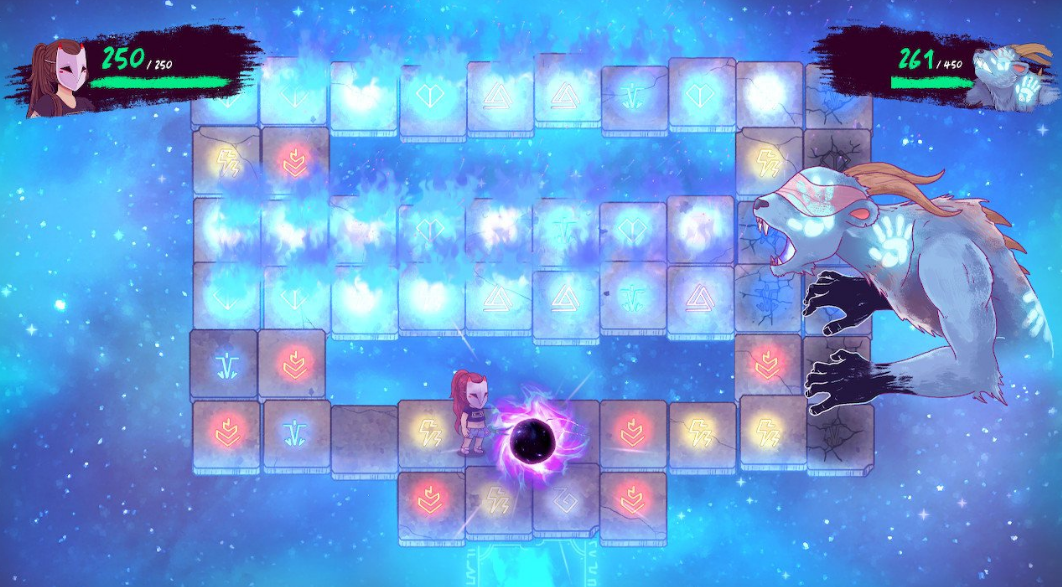 A bigger hurdle for some players will be the lack of significance for any of the side plots. As you go about your quest to get Jun home, you’ll encounter chances for little extra missions, such as helping a satyr-like character find his lucky hat. A lot of these side stories reward you with nothing save for a few character moments, meaning the reward is truly just more dialogue. I was ultimately fine with that since once again the writing and character designs made it worth my while to see every last bit of this game, but for others that might be a deal breaker.

Weirder still, sometimes you do in fact get an item for solving a puzzle or helping someone out, but it’s never clear whether the items have any real value beyond little easter eggs. Simply put, if you’re looking for a game with deep challenge and secrets, this isn’t it. If instead you want a game with excellent character moments and real relationships, welcome, friend.

I was overall satisfied with my playthrough, though there are certainly some plot elements that left me feeling things were a bit rushed. It’s very possible that I missed something that would change the ending or give more closure, so I’m not writing off the ending or anything. I do want to see more of Jun and her friends on Emrys, and hope for continued adventures either in future games or additional content. 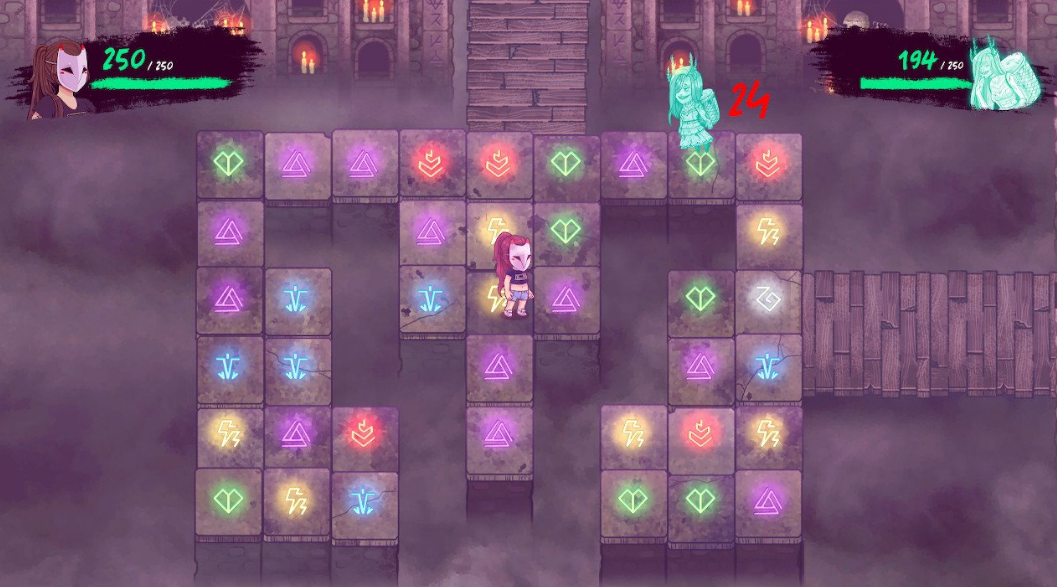 Rose City Games made a beautiful and strange game that’s well worth exploring. The writing and character artwork allowed me to form an emotional connection to the characters and story, which has me wanting more, and the gameplay is simple but addicting, which has me wanting MUCH more. My playthrough only took around 4 or 5 hours, which could be considered short but doesn’t account for the replayability inherent with alternative character dialogue opportunities gained through taking different friends into shrines or simply playing certain story beats differently.

Ultimately, The World Next Door deserves a playthrough and gets my full recommendation.
Labels: blog video games