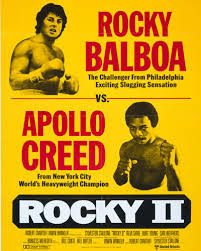 I want to start by being the first person to call this...Rocky and its sequels, including the Creed films, will be re-imagined as a sprawling series on a streaming service in my lifetime. It's going to happen. There will be controversy about some casting, Spider Rico will be a recurring character...it's going to happen. I guaran-damn-tee it.

The Rocky franchise has been the butt of decades worth of jokes about unnecessary sequels, and many folks will tell you to watch the first film and skip all the rest (and maybe watch Creed, because that movie totally rules). I don't think this particular movie will ever get any credit for being the only Rocky sequel that exists in the same reality as Rocky. From Rocky III forward, the series takes on what I'd call a more artificial vibe. It becomes a movie reality, signaled early in III by all the Rocky merchandise and artificial nonsense surrounding his hero's rise. Here, Rocky is still unequivocally slow-witted. He's still not a terrific fighter, even. He's still not great at human interaction. But darn it, he's such a good dude and there's no quit in him. I've gotten nods in the past for referring to Rocky II as "oh, yeah, the one they had to make because he had to actually win," but it still holds onto the first film's underdog persona. Is it a total rehash? Eh, to a degree all the Rocky sequels are a rehash of the first. That Rocky II bears the closest resemblance to the original simply has not done it any favors, much like Jaws 2 (stay tuned for that post). 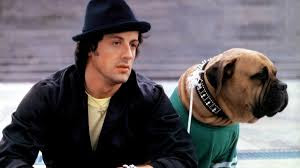 And moreover, this movie is a fascinating glimpse into Stallone's career. While the first film was an artistic expression of can-do spirit, the second is a post-success splendor followed quickly by unreachable expectations. People coming at him going, "What's next? How are you going to immediately build on this unexpected success? Are you a one-hit wonder?" And the whole first half of this movie seems to come from a place that answers, "Get off my dick, let me process everything that is suddenly changing. Let me be me, and get some of the things that I want. Wasn't that the whole point of all that insurmountable adversity and such?"

For instance, one of the best scenes in the entire series is when Rocky quarrels with the commercial director, and he tries to explain that he is not a completely hopeless idiot, he's just not an effing SAG member and this paid endorsement stuff is a little new to him. And the director is so exquisitely up his own ass about this ridiculous, terrible cologne ad. It's a scene that feels very real to me, probably because condescension makes me want to strap on boxing gloves. Rocky needs the money from that endorsement, but how much indignity can a man take, especially a man who can break you in half when he's pushed too far? I feel for anyone trying to quietly convey, "I ain't punchy, you know." 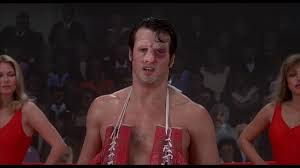 That scene is great, but undoubtedly the scene that I think was the nucleus of the screenplay for this one was Adrienne coming down to the basement, and Rocky having to tell her he got canned from the meat plant and he's thinking about fighting again. That's such a great scene about marriage, and gender dynamics, and masculinity. Just his very small, little-boy delivery, when she suggests getting her old job back and he just mumbles "But I'm supposed to support..." and he can't even really articulate properly what he's trying to say, but we understand. Rocky isn't saying that because he's a macho guy who doesn't want his wife working. He says it out of shame because he thinks he's failing to hold up his end of their family. It's a weak moment, and Rocky is always most interesting at his weak moments. It's this sequel's "this place stinks!" moment. Rocky almost always expresses himself badly in his lowest moments, and I love that consistency. Even Apollo's eulogy in IV is kind of that. Just Rocky, inarticulate and filled with shame, rage, fear, anguish...just trying to power through it and get some words out.

But...is Rocky II a complete stale doughnut of a sequel? No, I don't think so. It reused some prominent elements of the first film, which overshadows its deepening of the characters. Ever notice how many romantic comedies lean on the premise of "what happens after happily-ever-after?" There's a lot of grit in taking the quintessential motivational sports drama of the decade and immediately following it with a reality check like Rocky II's first act. And here's the hot take: the fight in this one might be better than the first movie.
Labels: blog movies Settle This Rehash