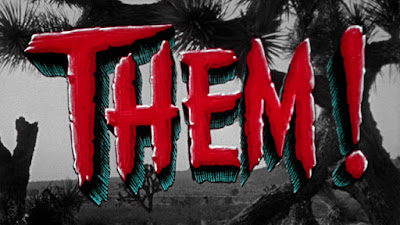 You cannot throw a rock without hitting someone's thesis about how creature-horror such as this film "slid into self-parody" at some point. Why? Because the monsters looked fake? And the acting was hammy? And the dialogue was so self-important? That's not self-parody, that's just the world of low budget B-movies, and it continues to this day. But Them! was not cheap schlock to fill out a drive-in's marquee in the mid-fifties, it was a proud Warner Bros. production. It also happened to be one of the studio's highest grossing films of the year, and is now without a doubt the most respected giant bug movie of all time. Take that, Eight Legged Freaks!

I simply cannot get over how efficient and smart this movie is for 1954. In the days when a fifty-minute film would need to be stretched out to feature length with stock footage or a conveniently disposable subplot where Redneck Ed talks to himself in one room and then disappears, this movie has not one ounce of fat on it. There's a mystery, turns out the solution is giant irradiated ants, and our humans hunt down the ants and cook them crispy with flamethrowers. That's about it. It's a bug hunt.
Originally supposed to be 3D and in patented Warner Color, the film was directed by Gordon Douglas, a true journeyman. He directed the most memorable of the Our Gang shorts with Spanky, Alfalfa, and the rest, even winning the Oscar for Best Short for "Bored of Education," the only Our Gang to win an Oscar. After that, Douglas directed everything from James Cagney gangster movies to Elvis musicals. Genre was not an issue. Thank goodness, because Them! is one of the most genre-heavy films ever conceived.

The same year that Godzilla released in Japan, Them! takes the same cautionary tale of the atomic age hoisting humanity on its own petard. Bomb testing in New Mexico has yielded radioactive flesh-eating ants between eight and twenty feet long, but is there a government agency in charge of all this chaos? Nope, we never would have known if not for the dutiful investigation of one good cop. And so many of the prototypical beats from a basic creature feature find their inception point in this screenplay: the shell-shocked lone survivor--just the same as Godzilla. The knowing scientists hinting at what we already know. The reveal of the monsters from out of a mysterious mist (or in this case, a sandstorm). A climactic fight in the cement labyrinth of the Los Angeles river. Even someone torching an entire room full of hostile monster eggs with a flamethrower, just like in Aliens. It all started here. 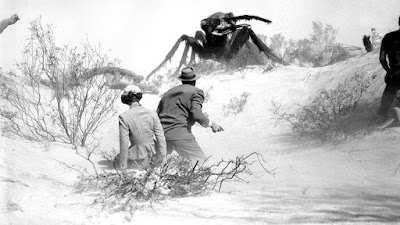 Star James Whitmore, known better to audiences these days as the tragic Brooks from Shawshank Redemption, carries his character's responsibility gravely and palpably throughout. Like many monster movies, there's an instinct to sideline the human characters until such time as the monster can feast on them, but Whitmore plays it straight as if he's Phillip Marlowe. It's actually a cagey choice, as Them! is almost structured like a common police procedural from the human side. Edmund Gwenn, who so memorably portrayed an alleged Santa Claus in Miracle on 34th Street, gives a lot of weight to this silly stuff as the government scientist quoting Bible passages about beasts ruling the earth. I know that Richard Attenborough played Kris Kringle in the remake of that holiday classic, and that's why my brain did this, but Gwenn's soft-spoken, oddly genial scientist gave me serious Attenborough-as-John-Hammond vibes.

By the way, speaking of the acting in this movie, there's a wonderful blink-and-you-miss-him Leonard Nimoy with no lines at all, and apparently this film is what got Fess Parker his iconic role as Davey Crockett for the "Wonderful World of Disney" television films, as well as a starring role on "Gunsmoke." That's a lot of fun. The late-1950s American child popularity of the coonskin cap literally never happens if not for Them! and that's a really weird thought.

I keep singing praises to the structure of this film. Just how solid and efficient is it? After a proper build-up with several unseen attacks, we get our first proper bombastic reveal of the giant ants, and that leads directly into a climactic battle inside the colony and all of the scientific exposition about why these things exist, how they've been killing folks, and how they communicate via chilling chirps. This sounds like it's the last fifteen minutes of the movie? Nope, this is a mere thirty minutes into this picture. That's astounding. This one movie gracefully moves through a modern-day trilogy's worth of plot in just over ninety minutes.

Man, if only our current crop of Godzilla and King Kong movies moved as swiftly and logically as this one. Good lord, Gareth Edwards doesn't reveal Godzilla for over an hour! We have to hang out with Kick-Ass and Walter White and hear about their family trauma before meeting the giant radiation-vomiting lizard.

Beyond that, it's just a fun flick. Every cent is on the screen, from terrific set dressing on the devastated trailer homes and stores to the ants themselves. These buggers are great. The design is just right, as sometimes a monster movie just plain goofs it on the size of the creatures. These things look and feel plausible, they have a real texture and personality. That first big reveal still works, even after sixty-five years. This movie clearly was expensive. Planes, and helicopters, and moving ant-matronics. Rocket launchers! Flamethrowers! It's ridiculous.

I have to mention my Greatest Moment Ever: a giant ant emerges from its giant colony hill with an entire bleached white human ribcage in its mandibles, then drops the ribcage on a pile of other bones and discarded clothes. Shelob would be proud! I love so much how ant behavior is factored into the film, from the structural patterns of their tunnels to their attraction to sugar. It's a nice touch. And it's an entirely practical one, as we get to spend ten minutes just watching real ant footage and having a terrific actor narrate it...much like a different Attenborough.

My One Major Criticism: Someone is in hot sweaty love with the Wilhelm Scream on this movie. The famous, overused scream is inserted about three or four times in this movie, twice in the same scene at one point. That's like...something Neil Breen might do, and you're not sure if it's intentionally weird or just incompetent, or...whatever. Whew.

This review is part of Kyle's Letterboxd page, follow him there for reviews not posted here on the site, including rankings and movie lists.
Labels: blog letterboxd reviews movies