These days, almost every comic property depends on its ability to be adapted into at least one season of television. Chris was the person who handed me Volume 1 of Dynamite's The Boys, back in about 2011, and we were firmly committed to the notion that the property was impossible to adapt into a big budget movie or show without completely sanitizing it of the garish violence and sex. To do so would rob the property of its personality, obviously, and at the time we laughed and said, "And what are they going to do? Release a hard-R comic book movie? The Bad Lieutenant with a cape and superpowers?"

Insert the SweetSummerChild.gif meme here. Not only are hard-R comic book hero movies normal now, they are huge hits! And The Boys is now very solidly Amazon Prime's number-one show. By the way, unrelated news, Dynamite is set to release the final omnibus of the comic series in December, and are currently reprinting the previous omnibus collections (which sold out of first printings almost immediately) with photo variant covers of the characters as portrayed on the show. The New Jersey-based publisher also has started their own apparel line to keep up with the demand for The Boys merch.

Now, meanwhile, no love for The Tick, because despite its quite complicated premise dealing with mental health, I guess it doesn't look edgy and grabby enough to a casual audience. That's unfortunate, because Amazon's version of The Tick was really good. RIPD to that lovely show.

Here are the Picks of the Week, releasing today in your local comic stores and on digital platforms: 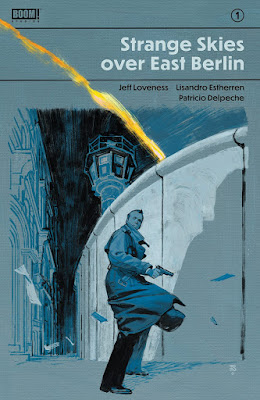 Today's geopolitical landscape is fraught with paranoia, wild accusations of treason, and a constant monitoring of personal behavior. It's just the right time for a classic Cold War thriller. But Jeff Loveness (Marvel's Nova and Groot, also a writer on "Rick and Morty" and "Jimmy Kimmel Live") weaves a clandestine tale of double agents within the Stasi of East Germany that also taps into extraterrestrial horror.

Herring, a US spy embedded in the Stasi, has witnessed something terrifying and powerful in the sky above the Berlin Wall, and via the dynamic and moody art of Lisandro Estherren and Patricio Delpeche, he will venture into secret Soviet facilities in search of the truth behind the strange lights. Estherren pencils such stark character designs and foreboding scenery that fit the time and setting perfectly, creating a palpable weariness, while Delpeche plays with noir shading and dramatic color palettes to provide a saturated unease as their protagonist delves further and further into the conspiracy. Not many comic books have that heavy-in-the-gut effect. 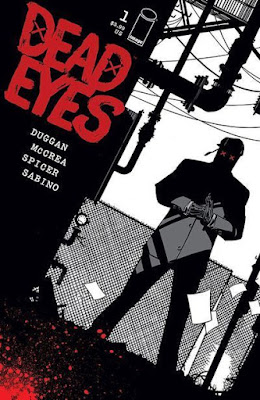 This is a very interesting case file, right here. Gerry Duggan, one of the most prolific Deadpool writers of the last two decades, teamed with frequent Garth Ennis-collaborator John McCrea to create Dead Rabbit last year, but the comic was recalled when a New York bar of the same name sent a cease-and-desist and a threat to sue both Image and Forbidden Planet comic stores. Now, a year later, the book has been rebranded as Dead Eyes.

Though the story seems largely unchanged--a skilled stickup man comes out of retirement to fight the mob and save his wife, set in 1990s Boston--the rabbit imagery and the character's origins in nineteenth-century Irish street gangs likely have been sanded down. McCrea's monochrome covers, when paired with the Image logo, sure conjures memories of 100 Bullets and other urban-jungle crime odysseys from that era. You know what I mean, the Marvel MAX, comics-for-grown-ups era. 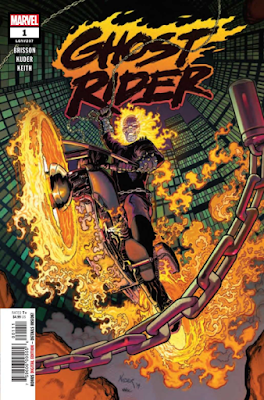 Having usurped Mephisto in last year's "Damnation" arc, Johnny Blaze now rules in Hell, while Danny Ketch tries to settle in to being the Ghost Rider on Earth. The Brothers of Vengeance are going to need to stop fighting each other before the real forces of evil arrive to challenge them. Cool throwback 1990s art by Aaron Kuder and four wonderful variant covers to choose from? It's a good time to hop on. I mean, come on! Look at that title treatment, that's some pure 1993 X-treme fun.

With Ed Brisson of Old Man Logan writing we're sure to see the untapped depths of Danny's anger, and...well, Hell is sure to break loose with a whole lot of crazy old magick-flavored action. Brisson transitions to Ghost Rider after spending the first part of 2019 on Uncanny X-Men. Previously, he was the writer tasked with a revamp of Iron Fist back in 2017 just as the Netflix show was dropping.
Labels: blog comics POW