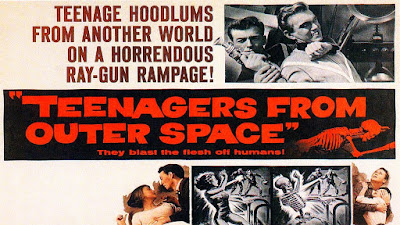 Movies like this are what caused a great cultural misunderstanding, that the American 1950s were somehow a "more innocent time" or some such nonsense. Obviously, it wasn't. It was an era of paranoia, jingoism, and shocking disregard for what were deemed "less civilized" people. While the horror films of the era are dismissed these days as being cheesy and simplistic, most of them portrayed very accurate unspoken fears: our inadequacy as an evolving species, and the consequences of our aims to evolve. Almost every horror film had some element of science fiction, either in the form of hostile alien forces or radioactive monsters of our own inadvertent creation. And the denouements of each film usually involved some cautionary lip service about human hubris or irrational hatred of the unknown.

Those are themes that could easily dovetail with a story of teenage rebellion, but sadly this film fails spectacularly at both. This was a damn slog. With a title like that, there's a lot promised, and much of it fails to arrive. Writer, director, producer, and actor Tom Graeff, coming off a brief experience as Roger Corman's assistant, seemed to be attempting the kind of guerrilla/shoestring scenario made famous by his mentor. He had his work cut out for him, with a $14,000 budget. But there's less scrappy invention here than good ol' fashioned half-assed shrugging. That myth of a "simpler time" also applied to how much nonsense schlock filmmakers assumed an audience would overlook.

While most 'youth-in-revolt' films of the era concern themselves with a poetic teen on the wrong side of the tracks, struggling to be themselves amid adult suppression and societal veneers, Teenagers From Outer Space takes all subtlety out of the equation and introduces a teenager from another solar system named Derek--I know, sheesh--who has been doing some radical freshman year reading about the dystopian nature of his world's society. Disillusioned with the constant boasts of superiority and disregard for innocent lives from his brethren, Derek commits some light mutiny on an expedition to Earth and is left behind. His people want to use our planet as a grazing site for their 'Gargon' livestock. Lobsters. It's literally a fecking lobster in a cage. Not a weird lobster, or even a lobster with some googly eyes cruelly glued to its carapace, either. Graeff merely passes off a mundane crustacean from Rockaway Beach as an alien super-monster that will quickly grow to gigantic proportions in our atmosphere. If this all sounds a bit dense, just imagine getting all of it in ten minutes of dried turkey dialogue from aliens wearing tube socks. Yeah, these aliens are real beauties: coveralls with big chevrons made of masking tape, and space boots consisting of wingtip shoes covered in white socks. Sure, no one will ever notice that.

By first introducing only the gaggle of stilted aliens, with their lack of contractions in their purely utilitarian, expository speech, the film builds an expectation that the human characters might feel more casual and natural. But no, it's just bad writing and so-so acting. It doesn't help that a good deal of the film's dialogue was prerecorded before filming began, forcing the cast to lip-sync their previous deliveries. It's a frankly bizarre and backwards method that accentuates the cheese factor.

Derek meets a cute girl and neglects to explain one iota of his strange demeanor or goofy clothes for over half the run-time, and his most dickish space compatriot Thor (ugh) tracks him down for execution. Thor leaves a trail of human skeletons behind him as he zaps literally everyone with what is clearly a plastic ray gun bought off the back of a comic book. It just keeps going like that, too. The skeletons are all the same skeleton, and it's still got "property of university" in marker on it. The joints are bolted together for crying out loud. The climactic explosion is stock footage of a volcanic eruption. The giant lobster? It's merely a shadow on the side of the frame, cast by the same exact ordinary lobster from the opening scenes. I sincerely doubt they paid for more than one.

As a piece of hammy sci-fi pulp, the film's only real responsibility was to strive for atmosphere or some kind of fantastic imagery to hang its hat on. And failing that, it should at least live up to the potential of its premise. This. Could. Work. If, say, there were anything palpably adolescent about the characters, and perhaps if human characters stood in as the adult society that doesn't understand them? None of that is here. There's not a make-out point, a clam bake at the beach, nothing. One ray gun and one girl in a swimming pool does not make a Teenagers From Outer Space. It's maddeningly rinky-dink.

The film has since earned a status as a Z-grade affair, inspiring kitschy throwback material such as the Destroy All Humans! video games and Tim Burton's Mars Attacks! I guess that's something. In all honesty, this is a film that makes me nostalgic for the scrappy invention of Ed Wood and his company of oddballs. Their films were terrible, but they never treated production value or spectacle as if it were an optional extra credit assignment. I guess I can officially turn in my rebellious young person credentials, because right now I'm not even mad. Just disappointed.

This review is part of Kyle's Letterboxd page, follow him there for reviews not posted here on the site, including rankings and movie lists.
Labels: blog letterboxd reviews movies