I have very little to say on the subject of the Joker movie. Really didn't care. I hear Joaquin Phoenix did a terrific job, and that's great! Too bad we can't see him do a terrific job as the Joker in a movie against Batman, or opposite Harley Quinn. But as I understand it, Todd Phillips is too cool and adult for these silly-ass movies based on funny books. Outta the way, the director of Hangover 3 is making a real movie, a serious piece of gritty cinema over here. That's why he made a movie about the Joker...right? But all snark aside, I hear plenty of people enjoyed it, and plenty did not. That's typically how this setup works, we don't have to have a "discourse" about it. And if it's happening on Twitter, let's just never condescend to calling it "discourse." Like, ever.

Speaking of filmmakers who don't care for comic books (but decided to talk about it anyway), Martin Scorsese! Yeah, that's not news. Hell, Tim Burton hates comic books and he made two Batman movies (and also Mystery Men, if Tom Waits is a reliable source...which he isn't). It really doesn't matter. None of it. If you think "Well Marty, that's awfully stodgy of you to take a dump on the popular genre of the day that many people happen to enjoy," well...you're right. It really smacks of OldManYellsAtCloud.gif or the ever popular "I don't like a thing...Okay" comic strip and so forth.

Moral: let people enjoy things, but let other people not enjoy things. Either side of the argument, you need to quell that perfectly natural instinct to become Jack Black in High Fidelity. It is not bullshit to state a preference. With that in mind, here are my preferences for comic book purchases coming out today! 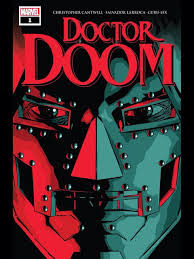 Christopher Cantwell, co-creator of AMC's "Halt and Catch Fire," takes the Marvel universe's most celebrated villain for an alternate-dimension hop akin to It's a Wonderful Life, you know, with a slightly Rick and Morty bent. Through the power of portals, Victor sees himself in all manner of alternate scenarios, including a mundane family man with a regular-degular job.

The art by Salvador Larroca strives to capture some kind of emotional depiction of Latveria's favorite son despite his features being hidden behind a mask. It's all in the lighting, the sense of theatrical, Phantom-of-the-Four-Color cape and head movement. Now that Disney/Marvel have the Fantastic Four and all of their associated characters back under one roof, I'm extremely happy to see the most valuable component of that property get a deep dive into his psyche. 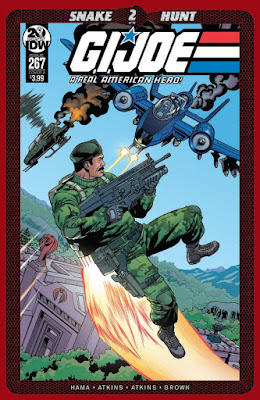 The key word here is "ambitious." The undisputed Godfather of G.I. JOE comics, Larry Hama, teams with Robert Atkins to deliver a ten-part miniseries that features literally every living JOE character in a desperate fight against COBRA's attempts to sway Snake Eyes to the wrong side of history.

Atkins is beloved by series fans for the vibrant palette and depth he provides. It really makes the book one of the more kinetic action stories on the racks these days. Hama is an absolute legend, with decades of history with the characters and a real sense of internal conflict to match the bombastic physical conflict. Even casual JOE fans should not sleep on Chapter 2 of "Snake Hunt."
Labels: blog comics POW