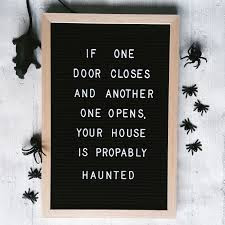 It's becoming exponentially difficult to scare me when I live in such times. Back in the long, long ago, I remember the most terrifying thing imaginable was the Crypt Keeper puppet character who opened every episode of "Tales From the Crypt." The opening title sequence to that show alone, the first notes of the theme music would send me running down the hall screaming and hiding under my covers. I think my dad knew that, and watched with amusement.

When adolescence hit, I was given to tell people that I was afraid of three things: heights (or rather, falling from heights), failure, and puppets. Really, the middle one was the biggie. The last one was just for grins. Funny enough, this October I voluntarily climbed a 125-foot tower at the top of an overlook gleefully, dragging the family along just so I could get a breathtaking view of Astoria, Oregon. I also watched both Goosebumps movies with the kids, and a few of those Conjuring and Conjuring-adjacent Annabelle flicks for good measure. What can I say? It's the spirit of the season. I must be getting old, as I'm much more concerned about the marriage of the fictional characters--who in turn are based on a pair of real-life odious hucksters--than I am gripped by any fear of spooky Pinocchios.

I guess failure is the only one I'll never grow out of. Which is why I spent such a long time selecting a proper Halloween-themed design for our TeePublic storefront. Of all the classic monsters in the pantheon of spooky movies that come out this time of year, I thought I'd honor one of my favorites...the Protector 101 series robot from 1986's Chopping Mall! 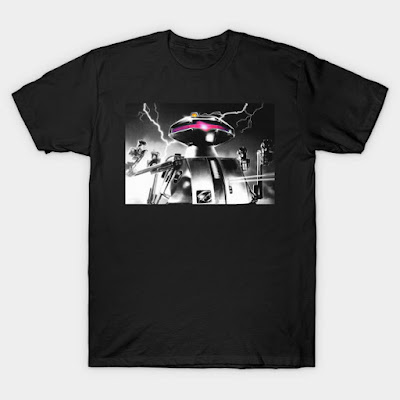 Don't ask me why this cheeseball killer robot movie charms me so. It's a plainly dippy movie, but it works at such a brisk, unassuming pace and packs so much novelty into 70 minutes. It's not scary at all, but damn it, Chopping Mall is a fun movie. I hope other fans have fun with this classic Universal Monster-style take on the killbots, which I think looks pretty good on black, and even on a red heather tee. As the bots say after every throat-clamping, head exploding death in the film, "Have a nice day."

As for other stuff bopping around the ol' Sandwich, there was a first post of a new column about sequel movies, Settle This Rehash. Thanks to those Rocky II fans who gave it a click, I think more of those are on the way. Video games are set to make a return as well, with Casual Friday returning for some retrospectives and mobile game reviews in the coming weeks. And most exciting for me, coming in the next few days, is a new podcast! This one has been in the works for quite a while, it's called Videos Tonight. A movie podcast centered more on the video store era, and featuring lots of guest stars, each episode acts as a commentary track that you can sync up to the movie and watch along with us. So, if you're ever in need of friends with which you can sit and watch a movie (and talk over it), come meet my friends! I hope folks enjoy the new show, but see, I know I will enjoy it. And that's really important, right?