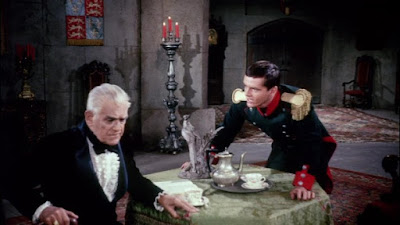 I have an unhealthy appreciation for Roger Corman's films. While it's true that the man makes more commercial product than transcendent art, there's an honesty to it. Corman has never pretended that his films were anything more than cheaply made diversions, the B-film playing at the drive-in while folks either grab a drink, a snog, or just drive away to beat the crowd. Rather than delude himself or put on a facade of being some misunderstood genius, like a Uwe Boll, Corman wisely leaned into his real talent as a budget-savvy producer and a mentor for younger artists. Much like Ed Wood's famous use of an ailing Bela Lugosi as a lightning rod of production value and legitimacy, this film is Corman's "Gallant" to that "Goofus" of a concept.

The Terror is not the most well-remembered of Corman's in-betweener movies--films made possible by shaving off a few thousand dollars from a larger product and recycling sets and actors to essentially make student films for his assistants--but it is certainly one that deserves to be seen, as it is emblematic of what great results a steady hand and journeyman thinking can accomplish. It boasts some real effort from the cast and crew, which included non-union directing from Francis Ford Coppola, Monte Hellman, Jack Hill, and even Jack Nicholson himself. Not to mention, it features a legitimately eye-opening score by Ronald Stein, performed by the entire 90-piece Munich Symphony Orchestra for a fraction of the cost.

I can't help but think that Stanley Kubrick did a couple of hefty rails and watched this film before shooting The Shining. Just like that hallowed modern classic of brooding dread and architectural astonishment, we first get a bird's eye view of our protagonist in a benign, natural setting before they are submerged into a mounting state of confounding unease. And all the while, the chief ghoul is the setting itself; while Corman's haphazard method of squeezing resources and sprinting to the finish line is a complete disparity from Kubrick's half-psychotic methods of control, the Castle von Leppe and the Overlook Hotel share something elemental. Scope. Looming, depth-of-field intimidation with great swaths of decadent color and pattern.

Corman--reportedly dashing around these magnificent sets that were all constructed for other, higher profile films The Raven and The Haunted Palace, trying to get his shots in before the wreckers demolished it all--is at this point a brilliant enough producer to realize that Boris Karloff and a young Jack Nicholson could prop up this little wisp of a screenplay with their dignified performances. The scenery took care of the rest, with the opening fifteen minutes largely acting as an extended establishing shot before we are submerged into the haunted castle and the confusion and intrigue of a ghostly young woman, a conniving witch, a mentally scarred Baron, and the handsome French officer trying to find the truth of it all.

While Karloff's role as the Baron was shot in only two days, his commanding presence alone makes this a movie. Corman's good luck charm Dick Miller (rest in peace, good sir) is ridiculously miscast as the solemn servant of the mad old noble, but he manages to inject a lot of character stakes into the movie for everyone else. It's a thankless role, like much of Miller's filmography, and as always he plays it with as much gusto as possible. Nicholson, as the audience surrogate and straight man in this house of horrors, is charming and believable despite some real groan-inducing dialogue. One opening line has him actually state "I'm a disillusioned soldier!" To borrow Carrie Fisher's snark for a moment: Sure, because I'm always talking like that naturally.

Like most Corman joints, it's not exactly a banger that you could watch every October, but it's undeniably impressive and some of its moving parts are genuinely atmospheric. I could see this film done lovingly and with terrifying effect right now, in the era of A24's heavy-breathing fare like The VVitch or Hereditary. The plot does not hold together under close inspection, and there are spots of meandering, seemingly aimless footage as result of Corman just shooting anything and everything he could. Smaller characters have arcs that lead nowhere, and Nicholson's character seems to have no actual effect on the events that take place, other than demanding explanation every few minutes so we the audience can be caught up. It's hastily put together, and the seams definitely show. But it's a functional film, made for probably $35,000 or less, with a few acting legends and even a couple of gooey effects shots that come from nowhere and pleasantly surprised me.

In essence, The Terror is one of those movies whose behind-the-scenes story is far more interesting than the film itself, but as an artifact it is undeniably significant. And as a quick 80-minute watch, it kept my attention and packed a lot of quality visuals and stylish choices into a modest package. This movie is Roger Corman, and my appreciation for him, in a nutshell.