Here's a comic book question for you: does every single character need their own series? I'm not talking about the odd Rocket Raccoon solo arc. No, that makes perfect sense. But this week's debut of The Amazing Mary Jane #1 and 2020 apparently seeing a Robby Robertson-starring series entitled Daily Bugle--sort of an All the President's Men, but with Spider-Man and Daredevil involved somehow--it's starting to beg the question of where we are going to draw a line. This isn't a new thing, I realize that. There were 137 issues of Superman's Girlfriend Lois Lane, after all, and Lois has her own 2019 title as well.

It's just...you know...remember back in 2014 or so, when Sony Pictures seemed desperate to sprout an entire cinematic universe solely out of Spider-Man's surrounding characters? They floated an Aunt May origin movie. That's dumb, right? This hasn't changed when I wasn't looking. Not every character needs to be expanded this way. I didn't need to know Boba Fett as a snot-nosed child, and I don't necessarily need to see Willy Lumpkin's semester abroad. 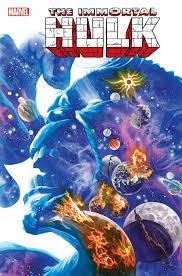 Al Ewing's cosmic, Lovecraftian journey to the end of reality with the Hulk as the all-consuming malevolent god being left alone in the vast void is...I mean, this is a really weird comic and it's fantastic. After the cliffhanger of #24 that laid waste to everything he's ever known, Hulk's new existence in a colorless void devoid of life or light is a fearlessly bleak lyrical exploration. Paired with this existential concept, the art from German Garcia and Chris O’Halloran captures something altogether hopeless and startling, but not without a sort of dreadful majesty.

This book has been one of Marvel's greatest ventures in the last few months, and now that the big green guy has taken his first steps toward a much darker take on a Galactus-size path of destruction, there's plenty of room for him to ruminate and brood on his equally unstoppable companion...his own pain. 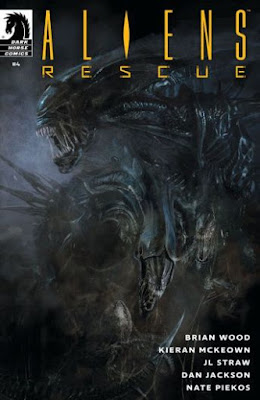 Earlier this year, Brian Wood successfully serialized the continuing adventures of Amanda Ripley, hero of the wonderful Alien:Isolation video game, in a four-part series called Aliens: Resistance. Finally, after all the horrific events involving the deadly xenomorphs, Ripley and her ex-Marine friend Zula Hendricks sought to thwart the Weyland-Yutani corporation from getting their filthy hands on the universe's most deadly hive creature. Naturally, in this sequel series from the perspective of Colonial Marine Private Alec Brand, the bug hunt has been amplified. Now Ripley leads a contingent of 30 Marines into a heart of darkness that is the alien hive. No matter how tough these hombres are, there's just no match for a migrating herd of H.R. Giger's famous space monsters, is there?

This final issue of the Rescue arc is sure the end with the kind of bombast akin to James Cameron's beloved sequel in the film franchise, along with some great character development from Wood, and wonderful action art in a moody space-horror color set by Kieren McKeown.