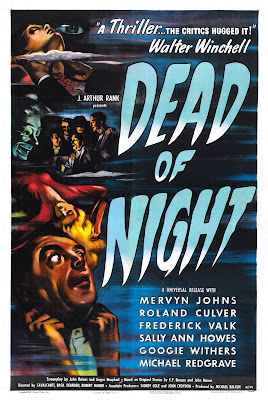 Anthology horror films are, I think, the greatest format possible for the genre. You can pack a feature film with such a variety of tone and aesthetic that just can't be accomplished or sustained properly otherwise. And here we have the wizened granny of spooky anthology films, which in 1945 sought to provoke everything from a contemplative dread in the audience to outright shock and terror. The bones of every Trick r' Treat, every Creepshow, every Tales From the Crypt and Vault of Horror are found in this sometimes slightly dusty supernatural anthology about breath-catching psychic experiences and tales of ghostly visitation and possession. As horror films were not produced in Britain during the war, Dead of Night served as fresh inspiration for the genre when it debuted; a seamless mixture of straightforward ghost tales and inexplicable distortions of time or reality, the film drops nary a speck of blood nor a note of the cheesy theremin music, castle thunder, or ghoulish shrieks that have branded many of its contemporaries. It plays very much like a proto-Twilight Zone, right down to the very first evil ventriloquist dummy in movie history.

While the pacing does bow in spots to a modern eye, with the mere 102 minutes stretching out laboriously through some of the thinner segments such as The Christmas Party or The Golfer's Story, I was surprised at how fluid and efficient a lot of the expository scenes and intimate conversations were. It's owed to very sharp dialogue, ranging from the quick-witted comedy duo of Basil Radford and Naunton Wayne in The Golfer's Story to a sort of Agatha Christie drawing room ensemble tossing the ball around in the framing story of the film. The performances are even quite gripping in spots, despite a lack of bombast or signature star players. Michael Redgrave in particular as the wild-eyed ventriloquist being haunted by his living dummy is far ahead of his time. There's something stately, dignified, and emblematically British about the characterizations and the way in which they tell their tales. It's all at once ghost stories around a campfire, but with an introspective dinner party quality.

The aesthetics are impressive for the time as well, not necessarily out of a sense of pizzazz or production value, but the fluency with which they convey subconscious dread. The Haunted Mirror segment mostly plays out an internalized horror across Ralph Michael's face, but every glance into the mirror reveals such a stark contrast in set design between the room in reality and its dark reflection. The room in the mirror is positively gothic, with a four-post bed and darkly paneled walls, a monstrous fireplace, and a creaky castle quality. Meanwhile, the room in reality is bright and minimalist, a typical "streamline moderne" affair. It's a smart piece of visual storytelling. As a matter of fact, almost every segment displays some lovely depth of field shots down hallways and up staircases that draw the eye down a sort of looming chasm. You know how in dreams you may run down a hallway and it seems to stretch infinitely? The imagery of this film is appropriately dreamy that way.

By the time the framing story gets around to the sudden, jarring climax, it does seem like too little too late, which is a consequence of this climax being preceded by The Ventriliquist's Dummy, which is by far the most assertive and fully realized segment. But Basil Dearden's psychotropic, elegant curtain call to every chapter (and how they play into the central theme of the story collection) is something very novel and confident. Seldom is the framing story of an anthology as engaging as its best standalone segments, but the final flourishes that play out over the credits stayed with me, and believe it or not even inspired a rival theory to the Big Bang when some physics fellows screened it back in the day.

This is the weirdest cinematic comparison I'll write this week: remember in Groundhog Day when the mechanics of the endless loop are just starting to reveal themselves, and Bill Murray snaps that pencil only to wake the next day (re: the same day) and the pencil is intact? The abstract helplessness and sudden comprehension of that moment is the same shade of horror that Dead of Night accomplishes. A disassociation from the comfort of reality requires very little in the way of special effects, drooling psychopath villains, or complicated lore. Besides, that all would get in the way of a remarkably elegant pack of familiar stories. I have every confidence that this film, if made today, would be branded "elevated horror"...whatever the bloody hell that even means.


This review is a part of Kyle's Letterboxd profile, which includes reviews and movie lists not covered here at the blog, including a ranking of several franchises and excerpts from the book, Cinema Autopsy, which is available on the Amazon Kindle store.
Labels: blog letterboxd reviews movies