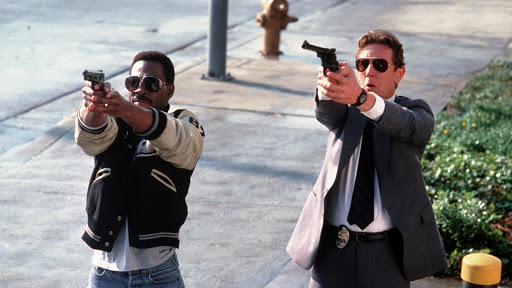 Eddie Murphy called it mediocre, half-assed. Roger Ebert bemoaned its lack of comedy, and how shrink-wrapped the plot was. The general dismissal of Beverly Hills Cop II is that it's a reheated take on the first film, only without any sense of spontaneity or fun. And these complaints are couched in truth; the movie is a more traditional '80s action cop joint, at times downright self-serious about itself. I guess my big question is...why was Tony Scott hired to direct this sequel in the first place? Because of the success of Top Gun? Oh, great. That beloved, laugh-a-minute comedy...Top Gun.

The plot is not a rehash, it's actually quite the opposite: a meandering LA neo-noir that is far too elaborate for its own good. Something something, ritzy Beverly Hills gun club...something something oil fields...something something race track? I dunno. Ronnie Cox has it all figured out, but I do not. Raymond Chandler this ain't. What it boils down to is a series of precision robberies, done in some kind of pattern and accompanied by taunting letters like a stale studio-incubated sequel to Zodiac. None of that really matters at all, though; true to formula, what actually gets Murphy's iconic Axel Foley back to California is the assassination of a friend. Yeah, just like the first one. And the third one, actually. But let's not even get into that.

Murphy returns, and he is good in it. He looks bored in spots, but that might just be a clamp-down on his comedy instincts. In 1984, Murphy was the new golden boy of comedy. Arguably, he kept the doors open at "Saturday Night Live" single-handed at the time while starring in two hit movies--48 Hrs and Trading Places--and also headlined his own feature-length comedy show on HBO, Delirious. He was twenty-three years old. Holy crap. As a result, the first Beverly Hills Cop is the Eddie Murphy show, standing squarely on his charm and his energy. I don't know exactly what happened by 1987, but right here is that crossroads in his career where we see the first glimpses of how rote and disassociated Murphy can get in "sequel mode."
Judge Reinhold is actually terrific in it, having let his character grow into something of an outsized weirdo after the events of the first film. He gets a couple of big chuckles from me just on his line deliveries, and he is more than ready to goose the energy of a scene to thaw out Murphy or blow the dust off John Ashton's crotchety shtick. I will say, while it's nice that Detectives Taggart and Rosewood are more equal partners in solving the case and display more of their own unique personalities, the movie's focus on making an ensemble out of these fellas is the most miscalculated sequel maneuver in Beverly Hills Cop II. It mostly provides a constant thrum of "responsible, reasonable, lawful-good" grumbling as Axel Foley pushes his charming rogue routine to its breaking point and stretches the credulity of "streetwise cop" all the way to "career criminal wearing a badge" in some spots.
The villains are the antiseptic mood killer, here. Brigitte Neilson might be playing her character as a Terminator. This is a year after she essentially played a helpless Sarah Connor type in Cobra, but now she's got this white, less interesting Grace Jones vibe she's trying out. It's, uh...it's something. Dean Stockwell somehow looks more embarrassed than he does tapping on a tinkertoy smartphone and chomping on a stoagie in "Quantum Leap." He's got a character, but the character is mumble-y and indistinct. And Jurgen Prochnow seems even more confused than when he was reading the script for Dune. They all stink. Good thing the movie really doesn't need them. They are barely here. These villains are scenery, which is a common problem in this franchise.

While not exactly a shameless rehash, there is a distinct sequel-size escalation in the DNA of this movie. First movie had a weirdly bougie strip club, eh? Now we get the actual Playboy mansion, which nearly gets a full-on montage sequence. The climactic gun battle at the end of Beverly Hills Cop is almost the only action scene, so Scott packs this film with the really big squibs. The ones the guy from the FX department has to get imported. The Renny Harlin squibs, you get what I mean? This movie has a cement truck chase in it. The closest thing to that in the first film, in terms of magnitude, is the soundtrack. And of course, Axel Foley upgrades from his crappy Nova to a beautiful red convertible. Why? Literally no reason at all. Just because. Sequel inflation. Pure cinematic economics. What fun is watching Eddie Murphy counterbalance Bugs Bunny with Shaft if I don't get to see him drive a Ferrari all over the credits first?

It's not terribly strange to think that Cop II came out the same year as Lethal Weapon and Die Hard. Because it fits with those movies a lot better than the first Beverly Hills Cop. This movie is a lot like Home Alone 2: Lost in New York...hear me out here: it somewhat boldly and mistakenly ups the intensity of the violence, and it also takes advantage of the increased budget to a distracting degree. Ultimately it does feel pre-packaged and inorganic, but not wholly without value. It's a little off-kilter, but it's a well put together film, and it gets a lot done for what it is. It's kind of Eddie Murphy's version of the disappointing Jack Reacher sequel. It's a solid cable watch.

Did I settle that rehash nicely for you? Nice. Stick that banana up your tailpipe.
Labels: blog movies Settle This Rehash