Okay, so harsh times are afoot in the world of comics. The massive DC layoffs and the deliberate disintegration of the DC Universe streaming service --and WarnerMedia also taking an ax to many other subsidiaries and business segments at the same time that went largely unnoticed--has been the headline for the last week or so. But hope still remains, after a fashion: Jim Lee actually spoke at a spotlight panel at C2E2 under the unintentionally ominous banner “We Are Still in the Business of Publishing Comics.”

Um...yeesh. The last time I encountered a declarative statement like that, it was the sign at a failing Dairy Queen that read "Yes, We Are Definitely Still Open."

DC Universe will continue as a digital subscription platform for the 25,000 comic book titles listed therein, and I feel reassured by that; Marvel has done very well with this model, and perhaps the cost-cutting measure of moving the video streaming service and its big exclusive hits to HBO Max will help to reinvigorate the still-blossoming digital comic book market. Quarantine has done funny things to us all. When my kids were born, a switch flipped in my brain and suddenly, I went from the ability to devour books in a week or less to an even more potent superpower to fall asleep with a paperback on my face. But now, only the better part of a year into this new way of life, I'm suddenly starved for new narrative content, and fresh new comic books feel like a bygone thing of my youth that I can't pass up. It's much easier to justify the expense for a digital account, much easier to download and consume...much easier still to get digital comics into the hands of folks who can't step into a local comic book shop anymore.

Now, that's a dark notion for those shops, but if there's one thing that struck very, very dark during this interview, it was Lee's pondering over what comics will continue to make the jump to physical print going forward. Essentially, Lee is conceding the fact that digital purchases are going to be the driving force for deciding what gets printed on paper and ink. That sure sucks for retailers and collectors alike, because it's going to relegate the entire industry toward propping up the ongoing narratives instead of making room for reprints and collections. It's going to become more of a current buyer's market, with video game tie-ins and movie adaptations taking a much bigger role than they have before, because those are the issues that sell to diehard fan and casual reader alike. Especially on a digital platform.

But think about that for a moment. Remember back during the good ol' days (before I was born, granted), when comic books were an industry that survived much more like a fresh periodical instead of a high-end, niche speculation market? This is going to be a painful process, moving primary business from print to digital, but it's been written on the wall for so many years there's really no excuse for anyone caught with their pants down. Storylines are going to be planned out differently, developing narratives are going to take priority over rehashes of past work. This could be an invigorating step for the medium, albeit a risky one.

Marvel and DC are not going anywhere, especially now that they both have unstoppable corporate masters, but I can't help but worry for the smaller publishers like Boom! and Darkhorse, whose output has dropped significantly and cannot rely on robust apps and corporate synergy to save them.

The Question: The Deaths of Vic Sage #4 (DC Comics) 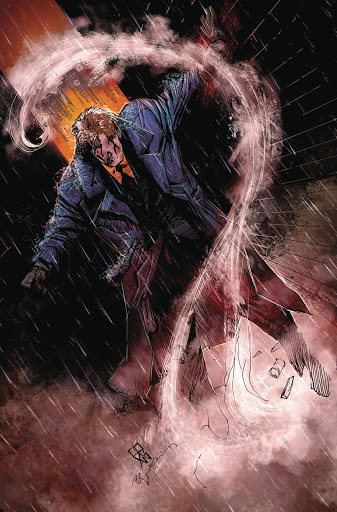 Jeff Lemire, recently of the "Old Man Logan" creative team at Marvel and creator of "Gideon Falls" for Image Comics, has resurrected Vic Sage as The Question, after he had died of lung cancer and passed on his persona to Renee Montoya during the New 52 reboot. Now, after three issues confronting his past lives in various timelines, Vic is back in present-day Hub City and poised to meet his new permanent position within the current, post-Rebirth universe.

A character who has gone through multiple alarming philosophical changes over the decades since his creation by Steve Ditko, Vic Sage has always been on a search for truth above all other things, both as a journalist and a faceless vigilante. This reintroduction to the character's mythos, pulling largely from the seminal Denny O'Neil series of the late '80s, leans hard into a more mystical approach and hopefully might lead into an ongoing mystery series that the publisher sorely needs.

It is a little depressing, in light of the recent meat-grinder of layoffs and cutbacks, to see such a promising work hit DC's "Black Label," a mature/prestige moniker meant to replace the now defunct Vertigo imprint. Black Label is one of the more hurtful casualties of AT&T/WarnerMedia cleaning house, and "The Deaths of Vic Sage" is one of those miniseries that presents a clear example of the kind of product DC can conjure that has no rival. But, alas, there's no more "Game of Thrones" war chest and no one is discovering cool new noir stories on the shelves of their comic book store lately. 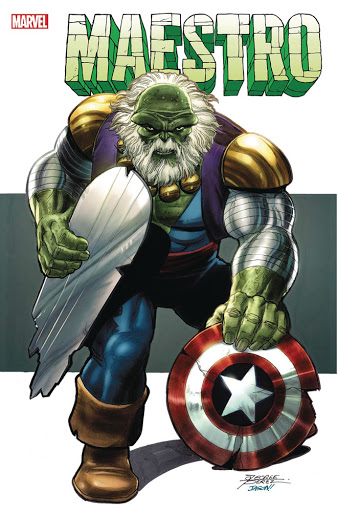 Peter David returns to his landmark "Incredible Hulk: Future Imperfect" storyline from 1992, to center a new series on Maestro, the far-flung future version of Hulk on Earth-9200. He's a malevolent leader in a post-apocalypse without any super-powered heroes left. As smart as Bruce Banner, and more powerful than the Hulk thanks to years of additional radioactive fallout, Maestro's new tale will fill in some of the blanks from his debut 30 years ago. For instance, where in his future world is the Hulk that we know?

David, who famously butched up Aquaman for DC in a landmark series whose influence is felt even today, has a knack for gifting less dense characters with complicated backstories and heavy senses of responsibility based on their history. And I really have to hand it to Marvel editors, who cannot be stopped in finding new ways to keep the world of Hulk fresh and interesting, with 2018's "Immortal Hulk" pushing the boundaries of what this character can mean as a concept. Perhaps "Maestro" can help push what the Hulk's powers mean on a personal, (super)human level.