The Mandalorian - Chapter One 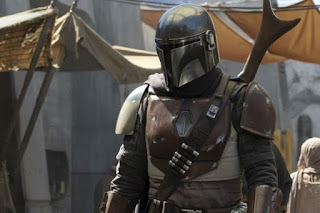 Let's get down to brass tacks right out the gate: as first episodes go, this one is solid. It establishes a lot without a big info-dump, and it begs viewers to tune in on Friday for the next installment. Moreover, The Mandalorian so far succeeds in the essential creative principles that make Star Wars a success: it's accessible, it's visually sumptuous, and it's relentlessly cool. And thank goodness, oh thank goodness it has nothing to do with the fate of the galaxy, the Force, a weapon of mass destruction, or anything connected to the Skywalker saga. It's just a cracking new adventure story that happens to take place in the universe we love, and that was all I wanted from Disney's promises of new Star Wars content.

When Star Wars Episode VII: The Force Awakens released, and took some criticism for playing it too safe and leaning too heavily on the goodwill for the original films, I had to laugh. My refrain was "yeah, heaven forbid a Star Wars movie look and feel too much like Star Wars." Now that Disney has pulled back the kimono on their shiny new streaming service--and hung said kimono entirely on this new Star Wars show--I see that some folks have the nerve to be surprised that The Mandalorian has also proudly leaned into the franchise's "hey, kewl!" factor and revealed only a few important breadcrumbs in this first outing. I, for one, am not surprised by this, or by the decision to release episodes weekly instead of the Netflix-approved binge model. This show is Disney's Game of Thrones. It is essential, in their eyes, to retain users for their new platform and to retain Star Wars moviegoers, now that plans for a new theatrical release every year have been scaled back.

So having acknowledged that, it makes perfect sense that this first of eight episodes is light on actual plot and a little too heavy on "hey look, it's that thing from Star Wars that I love!" Fan service abounds in such references to Kowakian monkey-lizards, Life Day, ugnaughts, parsecs, and stormtrooper armor. Sometimes it gets distracting, like when the exact same kind of ball-on-a-stick sentry droid as Jabba's front door pops out. Other times, I'm delighted by the deepest of cuts, such as beskar metal being a larger plot point, or the title character's blaster rifle having the same tuning-fork shape as Boba Fett's did in the 1978 Holiday Special. Just like The Force Awakens, a new Star Wars property must now prove itself as worthy of the brand before it ventures forward into its own territory, and these signposts are there to ease the weary fan.

Chapter One is directed by Dave Filoni, who helped create Star Wars Rebels and The Clone Wars. He also directed the pilot episode of Avatar: The Last Airbender. That's an amazing show, but much like The Mandalorian the introductory episode is a little light on characterization and heavy on atmosphere. Heavy use of storyboards and concept art (most of which play over the end credits, which, awesome) could have rendered this first chapter as a silent film, almost. Back during Filoni's Nickelodeon days, it was necessary; A:TLA was a brand new property with a dense backstory and a lot of whimsical concepts. The pilot was burdened with world-building, and it shows on rewatches. Meanwhile, The Mandalorian starts off with a huge head-start. Literally no one would watch this show unless they already had previous Star Wars knowledge. The world-building was taken care of decades ago.

Lest we all forget, the original Star Wars succeeded in providing such a rich, fully realized universe chiefly through the characters and their actions. We didn't know the history of the Empire, the details of the Jedi Knights, or even what the ding-dong hell a "clone war" even was. We didn't have to. We filled in those gaps with our imaginations. The Mandalorian's backstory and his ongoing motivations likely will come in small tastes, and thankfully those tastes take the form of his interactions with his bounty broker, his rival hunters, cantina rats who mock his heritage, and--as hinted here in the first episode--his quest to reclaim that heritage in the form of his beskar armor.

The drawback is that we spend 36 minutes with the objectively charming Pedro Pascal as the titular space outlaw, and so far have little reason to care about him. It's a very tricky thing, a protagonist without a face who speaks very sparingly. I'm quite shocked that Horatio Sanz's bumbling character or some audience surrogate doesn't end up accompanying him as a guide or sidekick, just to establish a rapport and provide some ongoing relationship. That worked for Karl Urban's Judge Dredd, and by virtue of ol' Mando's strong-silent archetype he can't exactly endear himself to an audience the way Hugo Weaving did as the anarchist troubadour, V.

Series creator Jon Favreau has been saying for months that he leaned heavily into westerns as inspiration, but he was playing coy the whole time. This isn't inspired by spaghetti westerns, it absolutely is one...just set in space. It takes place in a reconstruction era after a bloody civil war, it stars an outcast who belongs to a forgotten tribe of ferocious warriors, and takes place solely in a desolate, lawless corner of the universe occupied by dastardly dandies, salacious finks, and stone-cold killers. It even mimics Sergio Leone's staging of showdowns and dispassionate dispatching of the bounty hunters' targets. The chilly negotiations have the same heightened intensity in their dialogue, and there are even comic relief characters such as Brian Posehn and Horatio Sanz playing the Eli Wallach loudmouth to Pedro Pascal's deadly, silent Clint Eastwood. All that is missing is Ennio Morricone.

-I didn't say much about the big supporting cast, mostly because we haven't seen much out of them so far. Taika Waititi's turn as IG-11 is fun, if surprisingly understated. Nick Nolte delivers something gruff and memorable as an ugnaught rancher, more so than Carl Weathers as the harried bounty broker. Obviously, Werner Herzog's mysterious character is a show-stopper, clearly some sort of exiled Imperial creep. Though right now I have serious Jack Reacher vibes, as if Herzog is going to occupy a different plain of performance altogether from the rest of the show. That's not bad, necessarily.

-The Mandalorian Armorer sequence was a big highlight for me. The promise of learning more about the culture of the warrior-nomads through the building of the protagonist's armor is very satisfying, and I'm sure we'll get more of it if the series goes beyond this one season. After all, Gina Carano doesn't get hired to not do some fighting, right?

-As a Star Wars nerd, I'm conflicted on the use of "vac-tube" as a replacement for "toilet." Sure, it might sound less clunky than the Expanded Universe's established nomenclature--which is "refresher," by the by--but I guess I should just be happy that some brave soul finally addressed how folks poop in a galaxy far, far away.

-"You are Mandalorian! Your ancestors rode the great mythosaur...surely you can ride this young foal." This line compounds exactly what the show is seeking to be, a sci-fi fantasy horse opera.