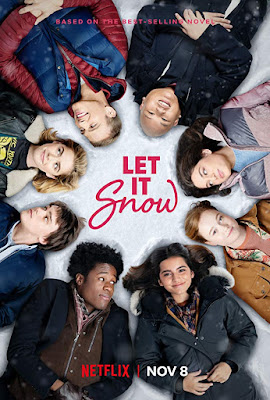 It's a Christmas romance movie. Based on a John Green book. I am not. The target audience. For this. But Netflix decided I just had to see every laugh line of the movie in one super-cut masquerading as a trailer. So, I figured, why not. You have to start early with this holiday spirit stuff, otherwise some of it will hit you on December 13 and it'll knock your ass out. Trust me.

It's one of those Christmas movies where there's supposed to be something magical on the air that brings people together, but never does it stray into Lifetime Original territory. No one here has a soulless corporate job that needs to be shed via the power of Santa. No square-jawed heartthrob is going to be a despondent child's new daddy. No actual magic, no Jenny McCarthy in sight. But it's also not overly cynical, nor does it rely on "teens speak a different language" levels of already-outdated slang. Yeah, there's a lot of Instagram, and one kid goes off on an adult about how smartphones are actually fine. I can forgive that stuff. What I found admirable is how the normally basic (wink) threads of a film like this are present but acknowledged. These characters are fully self-aware of the pitfalls of their love, lust, fears, instability, etc. And just like us, they seem to know in advance that they will win the day, fall in love, throw the greatest party ever, and learn to live life a little better. Finding the path to that end is the chief concern.

What Let it Snow really has going for it is a murderer's row of attractive, talented young performers, most of which have been featured previously on Netflix originals. Shameik Moore (Spider-Man: Into the Spiderverse), playing the pop star stranded in a small town, has a noticeably magnetic presence that translates to his comedic timing just as well as his lovelorn speeches. Kiernan Shipka (Chilling Adventures of Sabrina) has always been a very natural performer. While the jokes in the script land like sitcom/laugh track material for some of her costars, she adds a spark of spontaneity and honesty that helps the gags feel more lived-in. Liv Hewson (Santa Clarita Diet) has a bashful sincerity that pairs nicely with Jacob Batalon (Spider-Man: Far From Home) and his confident goofball charms. Each one of them feels like a fully realized character, despite the plot never digging too deeply into each one of them. The cast's shoulders keep this one aloft, no doubt.

Director Luke Snellin does put together something a cut above its genre trappings. He uses his locations confidently, stages some unexpectedly dynamic sequences, and provides a very subtle tone to his first feature-length project. Yes. Subtle. It's a word seldom associated with romantic Christmas movies, particularly ones featuring teenagers. But the movie does not feel obligated to be weepy or saccharine, despite tackling a lot of big character arcs for a "one long day" approach. Snellin's television background does show itself in the somewhat episodic introductions of each character and plotline. Also, the decision to bookend the film with an undercooked voiceover narration about the power of snow is...a choice. To be fair, it's very hard to ascribe something holiday-themed to a story that could easily take place in the dog days of summer without disrupting any of the plots.

The script is just a little overstuffed with moving parts. As a teen ensemble piece,  it seeks to be a sprawling ecosystem of characters that deftly moves the audience from comedy highlight to dramatic highlight and back again. For the most part, it succeeds, even if the climax and resolution to several plots lack weight or circumstance. The structure is sound, I just feel it may have benefited from some shaving down. I got excited when I saw D'Arcy Carden, or Joan Cusack pop up, but I also got very worried. Because we have no less than ten teenagers to follow around in a ninety-minute movie, and it never seems likely that it's enough time for all of them to get their due. Not all of them really do, either. One romance goes entirely unspoken until it is revealed, discussed, and resolved all in two minutes of screentime. Batalon's character seems to exist merely so all the others can converge on one location for the ending. And every single adult character exists only as a background obstacle, including John Green's requisite amazing mom who is dying of...something.

But it's a cute movie. It has heart, it has wit. People sing. They dance. They declare their love in big flowery speeches. It's like Christmas music: it's confident in its cheesy insistence on being cozy, comfortable, and nice. It's a really nice movie. That's not a slam. Sometimes a cinematic cuddle is what you need. And this movie doesn't pretend to be anything otherwise.