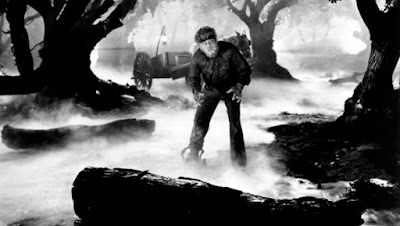 Released two days after the Pearl Harbor attack, The Wolf Man easily could have been rejected as an inappropriate diversion and ignored in favor of more optimistic, light options. It's not a light film, even today. Larry Talbot is a protagonist completely out of his depth, practically unable to even put word to the warning in his heart. He is a good man on the surface, but he is changing, succumbing to monstrous instincts. The people around him are either so preoccupied by superstition or are simply those that see "right, wrong, good, evil...are many-sided complex things." Even when Larry is accused of murdering a man, his father insists it's all just a very "complicated situation." Morality erodes easily for the man who feels trapped by a curse.

The film floats almost entirely on the backs of its staggering cast. The contrast between Lon Chaney Jr.'s affable, gawky American demeanor and the more stately, restrained performances from the likes of Claude Rains and Ralph Bellamy serves the film well. It makes him a stranger in a strange land, throws him into a stark relief as an outcast. He towers over his on-screen father and everyone else, marking him as a potential menace despite his charm. It's fitting, for a character trapped by a dire fate, a sheep in wolfskin. Once transformed, of course, Chaney put his 220-pound frame to good work, lurking and stalking through the foggy moor set with his spine coiled. Though the film belongs almost entirely to him, the standout performance is Maria Ouspenskaya as Maleva, the fortuneteller whose trance-like recitation of the werewolf lore absolutely captivates without ever losing the urgency of the scene.

That's really the big spectacle of the film, although the transformation sequences are still impressive in their painstaking display of craftsmanship. Cinematographer Joseph A. Valentine, who went on to shoot Alfred Hitchcock's equally painstaking Rope (1948), takes cues from the morality discussions within the film and coats every suspense sequence in copious fog and silhouette. It makes the monster's attack that much more startling to watch from a full-bodied shot some fifteen paces away, shrouded in knee-high mist. Instead of the claustrophobia and empathy for the victim inherent to modern horror, we the audience are indicted as culpable witnesses. With very few close-up shots, Valentine emphasized the creature's form as an incomprehensible other, a pure black among the grey that could only be understood when it was too close to survive. Jack Pierce originally designed the Wolf Man appearance for Universal's earlier, less-celebrated Werewolf of London (1935) only to have it rejected by the star of that picture for hiding too much of his famous kisser. Then Lon Chaney Jr. put it on, and the public faith in Universal Studios and their ability to deliver a cracking monster movie was restored. One could argue that The Wolf Man had something the earlier attempt did not: context.

As Curt Siodmak's screenplay notes, many societies have their version of the duality of human/animal nature. Native American tribes tell the proverb of two wolves inside every man, one good and one bad, and the one that prevails is the one that gets fed the most. Even in the same days that The Wolf Man was earning over a million dollars at the box office, Japanese Admiral Isoroku Yamamoto--who planned the attack on Pearl Harbor--reportedly wrote in his diary, “I fear all we have done is to awaken a sleeping giant and fill him with a terrible resolve.” Meanwhile, on the other side of the globe, good people put on their best clothes and attended church, hosted loving family dinners, and enjoyed the holidays...while their government kidnapped and systematically tortured a portion of them to death. I'm sure a lot of them waved a hand and said, "It's a very complicated situation." But as the lycanthropic verse advises, even the pure of heart who say their prayers can be the vessel of inhuman evil, if the situation is right. Sometimes all the situation demands is that the autumn moon shines bright, other times our culture only need be filled with a terrible resolve. A resolve to get revenge, to lay blame for our problems. Or to simply do nothing. The wolf may look different each time, but it exists within everyone. And it can awaken.