Halloween always has me rushing somewhere to get something at the last minute. I guess I reveal my true self in working on a costume: I show a lot of promise for someone as disorganized and slow and sloppy as my work is. Case in point, I'm leaving you with that so I can go craft a Buzz Lightyear out of cardboard.
Happy Halloween, here are your Picks of the Week! 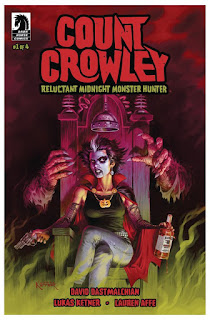 Okay, I'm cheating. This book actually came out last week, but it's such a damn good time for horror fans that it had to get a highlight this week. David Dastmalchian, the sly-eyed character actor known for Ant-Man, Prisoners, the rebooted "MacGyver," and Blade Runner 2049, writes a love letter to the kitschy days of midnight horror movie host characters like Elvira. When Jerri is demoted from serious news reports to playing 'Count Crowley' and introducing a bunch of cheeseball B-movies, she doesn't expect to come toe-to-toe with an actual werewolf, but hey. That's the job...?

Dastmalchian perfectly distills the adolescent glee of watching a Svengoolie or (in my case) a Joe Bob Briggs lovingly roast a dorky monster movie, with constant joking asides and a hospitable clubhouse wink to fellow genre fans. It's very funny stuff. The art by Lukas Ketner, co-creator of Witch Doctor for Image Comics, is kinetic and rich. Fabrics bunch and wrinkle while light dances across characters' highlights, lending a natural yet dramatic energy to a largely dialogue-driven story. If Return of the Living Dead were a comic book, Ketner would be the ideal choice to draw it. He has an ability to capture genuinely shocking images of the sinister or monstrous in a sort of album-cover, candy coating that never feels obtrusive or inappropriate. 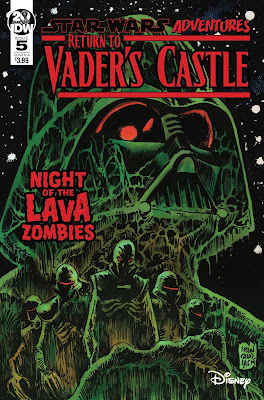 IDW's Star Wars Adventures title has always been hard to grasp. When Disney bought Lucasfilm Ltd. back in 2012, it was a foregone conclusion that Dark Horse was going to lose the Star Wars IP to Marvel. It made sense, Marvel published the first Star Wars comic books back in the 1970s and was now an independent arm of Disney. It was a natural synchronization of brands...even if it did made this Dark Horse fan very sad. But in recent years, IDW has been stealthily doing a lot of good work in expanding the new Disney-era of Star Wars canon with the anthology book. It's reminiscent of Star Wars Tales, the quarterly behemoth that Dark Horse published during the prequel era with a slew of contrasting art styles and storytelling concepts.

In the spirit of this month's spooky tidings, IDW has made October the month to Return to Vader's Castle every year for a series of horror-flavored (yet still family-appropriate) tales featuring the galaxy far, far away's version of the Monster Mash. Great idea, right? Vader's big looming palace of black evil overlooking the river of lava that made him is a perfect in-universe equivalent to a haunted gothic castle on the moors, and the company he keeps is almost exclusively that of grotesques. In this fifth and final issue, desperate prisoner of the castle Captain Hudd mounts an escape attempt in the face of an Imperial Inquisitor, and, uh...lava zombies are now a thing! It's a delightful mash-up of Star Wars and EC Comics-style ghoul times from Cavan Scott, a veteran of Dr. Who and Adventure Time comic books who is quickly becoming the go-to writer for Star Wars tinged with creepies.
Labels: blog comics POW