The Mandalorian, Chapter 6: The Prisoner 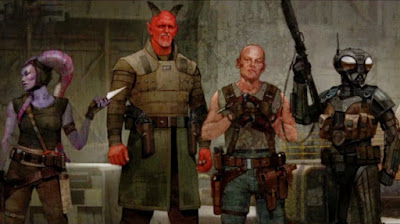 This being a Star Wars show (or so the Marvel Studios-style vanity card keeps reminding me), I cannot say this enough: space episodes are much appreciated. I was starting to feel like ninety percent of this galaxy far, far away is only made up of arid deserts and tundras. And to go along with our exclusively spacefaring setting this week, we have a plot straight out of an episode of Firefly, with a crew of likable scumbag mercenaries to go with it. Fuel is expensive, the government is a shit-show, and Mando can't hunt down '90s comedians for union wages anymore. Got a job? Good. Don't much care what it is.

The Razor Crest, my new favorite ship in Star Wars, gets a lot of attention for once. It's the first ship since the Millennium Falcon that has been given any kind of history or personality. While that famous freighter has a Kessel run on its books, Mando's boat is essentially invisible, having never been listed in Imperial or New Republic registries and possessing the kind of tech necessary to scramble tracking data. Where did he get it? How has this ship been unregistered for what sounds like two decades? Eh, it doesn't really matter, as long as it works. That's the attitude of Mando's old buddy Ran, who hires our now Guild-besmirched bounty hunter mostly for the ship he owns and less for his strict adherence to the "no questions" terms of the gig.

As a consequence to introducing Ran and his crew of miscreants, the guest cast is impeccable. Mark Boone Jr. brings his wizened outlaw scuzziness from Sons of Anarchy and it really lends a lot of grit to this admittedly goofy laser-Gunsmoke that has taken us all by storm. Clancy Brown? Now. We. Are. Talking! Brown's performance as a Devaronian brute takes advantage of his still impressive physique just as much as his comedic timing. Natalia Tena, of Game of Thrones and Harry Potter fame, is appropriately arch as Xi'an, the snarlingly sadistic Twi'lek. Tena is so buried under makeup that it threatens to eclipse any of her acting choices, but she makes it work for her, licking her pointy alien teeth and playing the blade-throwing femme fatale like an interstellar Eartha Kitt.

That leaves Richard Ayoade voicing the bug-eyed droid Zero, a splendid choice for the character's "guy in the chair doing computer stuff" role in this episode's heist mission. Bill Burr is, far and away, the most odd choice in casting for a band of ruthless mercenaries on the edge of a lawless galaxy, but he's a wonderful addition to the list of comedians who got to come play dress-up for Jon Favreau. Burr's more loose, modern real-world demeanor (along with his perfectly banal human appearance) as Mayfeld is a grounding presence against all the dangerous weirdos on his team, and he comes away with all the best lines of the episode. I dare say, give us a spin-off and anchor it on Burr's amiable jackass and his coming to terms with having been on the wrong side of history.

Rick Famuyiwa is back as director, and once again his history of depicting culture clash makes for more engaging dialogue. Mando, surrounded by degenerate thieves aboard his ship who mock his tribal code, doesn't bother to defend his Way of life to them. Later, when the same group surrounds a Republic soldier, there's a clear disconnect between a Mandalorian's single-minded professionalism and the rowdy bunch who don't bother with morals or even rules of engagement. They mock him, but his Way is what makes him far deadlier and worth a lot more pay than them, as they later learn the hard way. Famuyiwa stages both scenes in claustrophobic spaces to highlight the discomfort that we cannot see on Mando's face, and to emphasize confusion and

That's not to say the action scenes aren't some of the best in the series so far. The infiltration of the New Republic prison ship succeeds in showing a brutal fight with droids that the prequel trilogy could never even dream of. Then, this becomes a Terminator movie once Mando is forced to fight his way out of the prison ship. The red emergency and strobe lighting make him a wraith, and his faceless lifestyle betrays no malice or anger in his efficient stalking and neutralizing of the folks who betray him. It's just a job, and they made it harder.

The Child, once again, steals the show with an attempt at Force-infused self defense. Though some folks are finding it bothersome how long this little fella stays cooped up in a closet while all the action is taking place, I'd like to counter by saying the very best choice to make with Baby Yoda is to use him sparingly, not perpetually. Especially in episodes like this one, where the ongoing murky plot surrounding the Kid is put on the back-burner in favor of a cracking good space heist. Much like his previous episode, this outing with Famuyiwa seems purposefully to be a side-quest or a standalone story that puts the Lone Wolf and Cub stuff on hold...and in no way is that disappointing.

-"What's the look? Is that gratitude? Heh-heh, I think it is." This line nails exactly how a Mandalorian faceplate can be just as much a hindrance as an advantage.

-I find myself wondering if Boone's hair and beard were meticulously tussled and tinted for this role, or if he merely appeared on set that way and no changes were needed. Either way, I now demand more SAMCRO alumni crop up in Star Wars to provide that scum and villainy factor. Someone get me Kim Coates, on the double!

-"Razor Crest? That thing flies? It looks like a Canto Bight slot machine."

-This show is doing so much heavy lifting to depict the New Republic as kind of a do-nothing, ineffectual replacement for the Empire in the eyes of the average citizen. A prison ship entirely crewed by droids? Thanks, Mon Mothma.

-"Former Imperial sharpshooter."
"That's not saying much."
"I wasn't a stormtrooper, wise-ass!"