The Mandalorian, Chapter 5: The Gunslinger 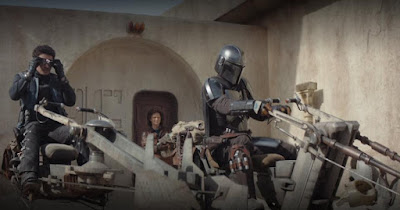 There's such a thing as too many fan shoutouts, and the place for it is evidently on Tatooine. After a fantastic space battle--the kind Star Wars has been lacking in lately, thanks very much--The Mandalorian sets an emergency pit-stop on the Skywalker clan's desert homeworld, and nearly every six seconds on average "The Gunslinger" painstakingly recreates sets, puppets, shots, and quips from previous Tatooine sequences to such a reverent level that it overshadowed some much better elements of an otherwise solid standalone adventure. It's still really fun, it just feels more like what I call 'grilled cheese,' sort of how Stranger Things sometimes catches flak for being nothing extraordinary underneath the 1980s Stephen King/Steven Spielberg coating. I wholeheartedly believe that "The Gunslinger" would have been a lot better if it would have relaxed and stop trying to establish nerd-cred.

This episode was written and directed by Dave Filoni, and though his work helming the pilot episode felt just perfectly on-target for tone, aesthetic, pacing, and even side characters and jokes, this Chapter 5 felt a lot more like an episode of Star Wars: Rebels or Clone Wars. That's not necessarily a problem, because those shows are great, especially at gently introducing deep-cuts Star Wars literacy to a new audience. But this is the fifth episode of eight, not the fifteenth episode of twenty-four. As such, it tries to pack a lot into a mere half-hour format.

The good: Ming-Na Wen as an amoral gun-for-hire making her last stand in the desert. Her fight scene is impressive, as it always has been on Marvel's Agents of SHIELD, and she gets a lot of dastardly manipulation to play with in her big negotiation scene. The mission to hunt her down is a perfect case-of-the-week setup, complete with classic western tropes given the Star Wars lacquer. Also splendid is Amy Sedaris cosplaying Ellen Ripley and managing Phantom Menace-era pit droids. Her confident comedic energy is just what the show needs after last week's more earnest than usual guest characters, and her babysitting of the Child makes for plenty more meme-able 'awww' moments. It's almost like that wry situational humor rubbed off on Pedro Pascal. Since Mando takes on a bounty hunting protege, our lead actor gets to lean a little harder into another popular Western character type and roll his eyes at the unearned confidence of a younger man.

The...eh, fine: Jake Cannavale plays Toro Calican, the LeBeouf to Mando's Rooster Cogburn. Cannavale has good acting instincts, and because of that he's trying a little too hard at playing Toro, who in turn is trying a little too hard at being a scoundrel worthy of Han Solo. I know I'm not supposed to like him. Mission accomplished a little too well, I'd say. This character would work a lot better if there was something likable or enigmatic about him, some quality that might give Mando or Ming-Na Wen's Fennec Shand pause before trying to blow out his power converter. Having said that, Toro's first big bounty hunting job gives us a peek at the Guild's business since the pivotal shootout on Navarro, and I think that peek is going to be key to the final few episodes here.

The Mandalorian has successfully pivoted from a very elemental and stripped-down concept into essentially Star Wars: John Wick, a high concept bit of comic book lore that hangs on the shoulders of a stoic protagonist and an elaborate system of rules for his occupation. Also, the satisfying action sequences are a plus for both. The hunt for Fennec Shand not only gives a good example of how desperate life becomes with a death mark in this corner of the galaxy, it also broadens the scope of the Guild and their rules, giving added weight to the Child's mere existence being discovered by anyone who might have a fob out on the little one. As much fun as the simple Western motif has been for me in particular, this is how this story becomes serialized television.

-Amy Sedaris as Peli, the put-upon docking bay supervisor...this could be a viable comedy spin-off, Disney. Don't be afraid to get weird with Star Wars. We will accept a workplace comedy!

-With the stormtrooper helmets on spikes, the cantina not only allowing droids but being run by droids, and the Guild no longer doing business on Tatooine, it's clear that the fall of the Empire has actually changed a lot of things in the day-to-day lives of backwater denizens, just not in any way that actually matters.

-The stinger at the end of the episode, I assume that's Giancarlo Esposito's character retrieving Fennec's body from the desert. The former Gus Fring is now some sort of post-Imperial Moff, a warlord. The folks who have somehow convinced themselves that it's Boba Fett...yeah, nope.