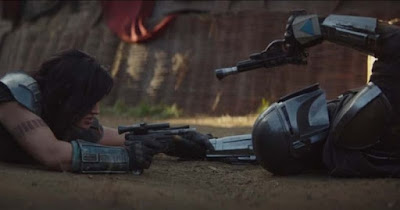 The Mandalorian is starting to feel more and more like a video game with the way the episodes are building the season's structure. While the pilot episode provided us with a comprehensive and stylish introduction to the main quest and characters, Chapter 2 went out of its way to feel isolated, like a quick side mission with some tutorial content. After Chapter 3 expanded the title character's motives and raised the stakes on his primary quest, this fourth episode suffers ever so slightly from "second planet syndrome," with a new side mission curated lovingly from a familiar film plot, designed to be applied like a temporary tattoo onto our existing characters and formula.

Yeesh. This sounds like I hated it. On the contrary, I love it! While "Sanctuary" is the first episode to feel constrained by television budget and scale--for a fact, this is pretty much an episode of Firefly right down to the disturbingly small amount of extras--this seemingly unimportant one-off episode is handling a lot of necessary growth to Mando as a character--a budding bonafide hero, even--and his relationship to his "son," which Gina Carano hilariously calls the Kid (formerly the Child, alias Baby Yoda). Her amusement toward the darling little tyke and how that amusement blends with her intrigue toward the journeyman protector makes for an effective outsider perspective on their story.

Speaking of this week's second-biggest guest star, former MMA fighter Gina Carano's acting has gotten better since Deadpool, and miles better since she first made the leap to Hollywood action star. At the very least, she has a director here who trusts her to take a character beyond the stoicism displayed in Haywire. That's a dang good movie, though, and she's good in it. But here, as Cara Dune, a former elite trooper from the late days of the Rebel Alliance, she gives just enough of a rueful, warm tone that makes her intriguing enough of a player in this miniature Seven Samurai scenario. I hope to see more of her. Her only stumbles were with a mouthful of bad expository monologue to introduce herself, and that's not a performance issue. There's no good way of delivering lines like, "We were peacekeepers. Protecting dignitaries. Not what I signed up for." It's just wooden, utilitarian sci-fi. But hey, we've got twenty-five minutes to grow attached to her, this has to move forward somehow.

Sidebar: Carano and Cobie Smulders could easily play opposite each other in some kind of buddy-action picture. As reluctant partners, as sisters, as a cop and a criminal who hate each other. Show me that. End of sidebar.

Taking the torch from Netflix's Daredevil, this show seeks to anchor each episode in at least one dazzling chase or shoot-em-up action setpiece that ends up being the watercooler discussion on Mondays. This week's first-biggest guest star, a re-purposed, night-visioned AT-ST walker, was given its best scenes since 1983. Even Return of the Jedi failed to convey exactly how terrifying one of the Empire's chicken walkers could be from a ground-based perspective, and the red glow of the viewports gives it a real primordial dragon aesthetic. That scene is the episode's biggest and most bombastic, but I give extra points to Carano's fight outside the cantina with Pedro Pascal's Mandalorian. The editing does jump around a lot to cover the clumsy execution of the choreography, but that's mostly for Pascal, who likely can't actually see a damn thing in that helmet.

It's an action-packed episode, and while the plight of the krill farmers and their village exists largely as the excuse for all the action, it also makes for a great temptation for Mando himself. Beautiful and kind Omera, who seems to harbor a lot of respect for the tough guy in the faceplate, offers essentially to help him make a home and a life of simple isolation for himself and the Kid. It's a tidy resolution to his problems: he and the Kid are now hunted across the galaxy, why not take off his armor and live peacefully in the middle of nowhere, secure in total anonymity? Well, obviously, because turning his back on the Way of Mandalore means he's exiled forever. And as much as the village and Omera remind him of a childhood without masks (one that was also vaporized in blaster fire), his loyalty to his tribe is what drives him. At least...until he saw that little green dickens. The Kid is a part of his personal tribe now, so who knows how far his loyalties will stretch?

-The Klatoonian raiders are a little on the bland side of the Putty Patrol, design-wise. At least for this show's track record. If not for a stray astromech droid, I would have believed the cold open of the episode was a bombastic new Planet of the Apes sequel, or perhaps just reconstituted Uruk-hai.

-"Real backwater skughole. Which means it's perfect for us. You ready to lay low and stretch your legs for a couple of months, you little womp rat?"


-This episode is directed by Bryce Dallas Howard, which might explain why the acting feels elevated since last time and the rest of the production feels a little bit auto-piloted. I do feel Howard has a lot to say as a performance-driven director, she could be a great asset to a franchise that is sometimes maligned for a lack of pathos.

-Eagle-eyed viewers might notice that one of the krill farmers soliciting Mando's help is none other than Pillboi, the second-dumbest crook in Jacksonville over on The Good Place.

-"So, what happens if you take that thing off? They come after you and kill you?"
"No. You just can't ever put it back on again."
"That's it?"