The world of comic books has gone through a lot of changes over the last few years, not least of which being the digital sales and exclusive apps from the big two that have rendered your longbox obsolete. But you know, nothing has ever stopped new comic book day ever Wednesday.

Diamond Comic Distributors Inc, that monolith of print distribution that handles almost every major publisher in the business, announced last month that they would cease shipment of new comics starting April 1 due to pandemic circumstances. In the grand scheme of things, it doesn't seem like a very important worry, but I'm sure all our local comic shop owners feel differently. New books in loyal customers' pull-boxes made for the most dependable revenue stream for them. Thankfully, most of the publishing companies have offered retailers a 60-90 day return policy on all new stock, and have cancelled all "non-essential" releases such as second and third printings. I wish my friendly neighborhood funnybook dealers well during this difficult time for their already strained businesses. But until new books come back, what can I recommend?

As it happens, my kids found their way into a batch of comics we had stuffed away in a drawer for almost a year, and some of them are absolute hidden treasures. Hopefully they are readily available on your Marvel, DC, or Comixology apps. Among them are several sepia-toned throwbacks that I found charming as heck, and I think you would be using your time wisely to track them down. 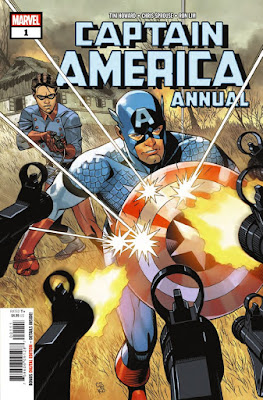 Try telling a compelling, human story of survival in the most desperate and horrifying corners of the European theatre while also including a spangly super-soldier and his mouthy sidekick from an era where comics weren't allowed to convey properly the horrors of that very real point in history. It's difficult to say the least. Tini Howard pulls it off with gusto. Steve Rogers and Bucky Barnes are trapped in a farmhouse with a group of determined concentration camp escapees, and their only option is to hold off the Nazi horde outside until Allied forces can arrive to secure their escape. It's going to be a long night full of open emotional turmoil and strength. Tellingly, the camp survivors are not Jewish; Soviet, Roma, homosexual, they illustrate how far-reaching fascism's idea of "sub-human" went, but Cap and Bucky are not concerned with a lack of understanding "other," they just know what right and wrong look like.

There's a precarious balance between discussing truthfully and painfully the reality of what atrocities occurred (and still occur) due to human ignorance, and also striking an inspiring--if slightly cartoonish--figure of ultimate good to stand up to the very real figures of ultimate evil that reality provides. All at once, Howard's scripting feels timeless and relevant, without treading past the medium's bounds of tone and sensibility. And what's more, the deep roster of Marvel artists who penciled, inked, and colored this one-shot issue manage to find that balance as well. Both the bleak realism and washed-out color palette somehow never feel at odds with the exaggerated Greek heroism of Cap and Bucky's visages, and their rich color scheme that is occasionally juxtaposed with a striking background to highlight a moment of visceral danger.

This annual issue captures exactly how to use Captain America's old fashioned, exuberant characterization and make it not just palatable, but essential for a modern audience searching for something to believe in and relate to. 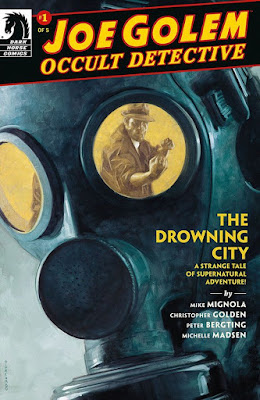 What happens when Mike Mignola is free to roam around outside the Hellboy shared universe he's created? Something still really in his wheelhouse, but with a more crisp, pulpy sensibility and without the heft of nearly thirty years worth of lore. Adapted from a prose novel series, the story follows a hard-nosed gumshoe as he tries to protect an innocent kid from black magic scientists in a noir version of New York City filled with Venice-like canals. It's the 1970s, but it looks like the 1930s, and Joe is equal parts Sam Spade and Indiana Jones tracking down magic idols and beating the biscuits out of a group of gas-mask clad creeps doing sinister and grisly rituals at the behest of some real Edgar Allen Poe wannabes.

Mignola and Christopher Golden have a mashup here of both the aesthetics and plot beats of two satisfying throwback genres, and yet the art from Peter Bergting has a modern gloom and texture to it that really sets the scene for the watery grossness of the monsters and mayhem taking place. The real visual star is Michelle Madsen's choice of patina, which somehow marries the antique earth tones and decaying urban monochrome into something that's peak Dark Horse, peak Mignola, and yet retains a kind of golden-hour warmth that I found both inviting and invigorating. It's truly the quintessential Dark Horse Comics property, but I will admit that readers would benefit greatly from previous knowledge of the property, as the novels provide a lot more context for the stunning imagery than a typical comic issue can achieve.
Labels: blog comics POW