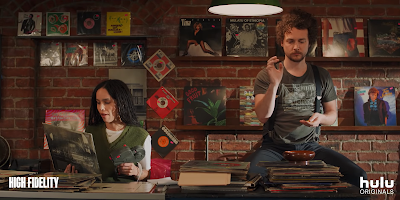 Every once in a while there's a piece of television that crops up in this age of a million different streaming platforms that screams out "Hey, are you exactly 31 years old, or what?"

For me, for the Spring of 2020, that's Hulu's "High Fidelity," a serialized remake of Stephen Frears' 2000 comedy film. I was thirteen when I first rented the movie from a Blockbuster, and now the protagonist Rob the lovelorn record store owner is the exact same age as I am. Granted, now Rob is a woman in Brooklyn who is about ten thousand times cooler and more interesting than me. But, you know, it's too much to ask for a piece of television to crop up and scream, "Are you exactly 31 years old, and also a dork with a blog who lives in suburban Portland and still listens to Simple Plan when you're feeling wistful?" That would just be creepy...and not terribly marketable.

Originally created as a more adult choice for Disney Plus subscribers, the show was shifted to Hulu almost a year before it dropped, and I for one am thankful. The show fits Hulu much better, with their unassuming forays into the Streaming Age that feel halfway between a daring HBO or AMC joint and something more conventional-yet-quirky that might show up after 10 pm on USA or TNT. It has a much better chance of finding an audience on Hulu than on Disney Plus, with its F-bombs, fun nights of whiskey and blunts, and positive sexual relationships. But the choice to reboot High Fidelity as a series in 2020 is still an unexpected one. Sure, on the surface, it sounds like a hangout sitcom. In some parallel universe, I'm sure Championship Vinyl became the next Central Perk coffee shop, a thoroughly dressed set that could be used indefinitely as the location for a multitude of aimless dating advice and zingers about someone's ugly coat. Thankfully, this show stays very true to its origins in tone and palate, and has a firm grip on its specific audience.

The chief advantage to drawing out this story into a series is that it allows for the aimlessness, the malaise of a hard breakup to flesh out. Rob can sit and stew in all those memories and feelings, her friends and family can put more outside perspective on it while trying to pull her out of this funk, and we get to see a more organic transition to her confrontations with all the old relationships. The film has to use the record store--with punker shoplifting antics, Kevin Smith-esque bagging on square customers, and the whole Jack Black Show--as a cool-down and reprieve from the romantic melodrama. Series creators Sarah Kucserka and Veronica West wisely interconnect the music junkie diatribes with Rob's ongoing inner soap opera as one cohesive whole, lending a lot of style and weight to the hookups and breakups.

Beyond that, there's the obvious: High Fidelity tends to be a much more popular movie with white men of a specific age, because that's the place it comes from. The music that wraps itself around the movie and its characters is of a certain era, but also a certain limited demographic. I remember writing a review for the movie Ready Player One and wondering why, in all its deification of 1980s entertainment, we spied no reference to Eddie Murphy or Run-DMC anywhere in there. This update, obviously, can take an audience to broader horizons musically with jokes about Kanye West's MAGA hat, and a well-timed music cue from Swamp Dogg. But it's also shed the movie's arguably gross-in-hindsight depictions of a stalker ex-boyfriend completely re-framing his romantic past and digging up trauma for a lot of women who he hurt over several decades, all in a very dudely need to explore himself and feel better.

Zoe Kravitz manages to pull off the character of Rob wonderfully. It's no mean feat; John Cusack gave one of his best performances in the film, balancing his sharp, witty charm with a perpetually haggard aesthetic and a mountain of pretentious asides to the camera about Six Six Sputnik, or what...ever. Kravitz, while plainly alluring and ethereal every moment she's on screen, almost plays her take on Rob as the love child of Cusack's version and the character her mother Lisa Bonet played in the film. She has a laid back pirate swagger, at times looking like she might have just finished a spliff on the walk over and she's feeling pretty dang casual about everything. It's aloof, which really pairs well with the character's fears of commitment and her frequently bailing out of situations without a word. Once things start getting heavy or unpleasantly introspective, I absolutely buy Rob's slides into naked, helpless despair. This is something the film had in little fits and starts, but the show pulls off better: Rob is frequently made very vulnerable, and no amount of self-reflection or self-awareness can armor her against it, unlike Cusack's Rob.

The real surprise here is how word-for-word the dialogue is transplanted into this reboot. Some of the music discussions and references are updated for a more "you know you're a '90s kid" audience, like replacing Peter Frampton's "Baby I Love Your Way" with Boyz II Men's "I'll Make Love to You," but outside minutiae like that, entire pages of dialogue from the film are spoken again almost verbatim. It gives it that uncanny-valley feeling of watching a college stage production of a notable screenplay at times. On the other hand, it's mostly just remarkable how funny and relevant most of the lines are twenty years later.

Early on in the first episode, Rob and Simon (number three on her all-time heartbreak list) posit together that "the things that you like are as important--no, no, no, more important--than what you are like. Movies, TV, film, literature, poetry...this shit matters." While this doesn't necessarily serve as a thesis for the show at all, it does establish how these characters relate to each other and how they perceive each other. Rob's old college flame Kat reacts to a six-pack of Pacifico beer in exactly the right way to tell the audience who she is (a superficial snob). Rob's faithful buddies and employees Simon and Cherise talk fast and loose about the "weird but warm" sound of a cassette tape, or the inability to enjoy a Michael Jackson album in present day, and you know who these people are. The efficiency of using the premise to such a narrative advantage is an admirable way to endear the characters to an audience without any backstory or exposition. And many kudos should go to David H. Holmes and Da'Vine Joy Randolph for providing the same kind of manic energy and offbeat bonafides to the show that Jack Black and Todd Louiso did for the movie, albeit with a totally different flavor.

Rob's rules for the perfect playlist are founded upon a truly artistic maxim: one must strike a balance between being familiar and pleasant, and being striking and esoteric. If there's one thing that "High Fidelity" has going for it, despite a more captive audience than normal due to our current climate, it's the promise of Rob's rehabilitation. It's one thing to fetishize, categorize, and lovingly revisit the past. Hell, that's a common hobby for most folks over the age of 30. But the tantalizing prospect that one of us common sinners might actually use such navel-gazing as a method of self-improvement is the true millennial standout of this show's fresh take on something familiar, but not too familiar.

-"So Lily, she's a good listener? She understand you? She nods at the right times and stuff?"

-"What...FUCKING...Lily girl?!" while being one aforementioned lift of dialogue from the original, is delivered with such disbelief and fury that it made it new again.

-Rob's renewed smoking habit as a device for her frazzled mental state is a little too on the nose for me, but it's in perfect keeping with her penchant for anachronistic past-times and it affords us a very realistic reaction from present-day hip and healthy Brooklyn denizens who all recoil at the very smell.

-Looking around at a table of Instagram influencers: "I should probably fucking hate these people, but...uh, give me a second...Okay, yeah. I hate them. They're the worst."

-I realize that I've said literally nothing about Nick Hornby's novel. It's fine. It's funny, but in a much more dry, biting way that doesn't appeal so much to my perpetual soft-boy tendencies. But I must recognize the skills, because for a first novel it filled a void for Generation X in a way that only things like MTV's "Daria" and a good Gin Blossoms track could. Angsty, acerbic, and somehow lovable in its sincerity at the same time.

-"There's no such thing as an anti-hero. That's just the bullshit they feed us so that no one notices that Clint Eastwood is a fucking asshole...all the time!"