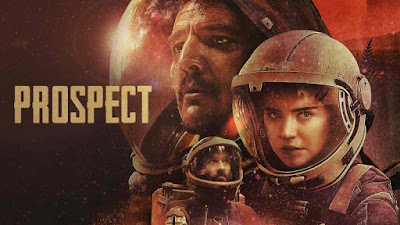 As much bandwidth is chewed up pointing out that Star Wars is a space western, it's really not. Parts of it fit, but then again parts of Star Wars fit equally into Wizard of Oz, Yojimbo, Flash Gordon, Captain Blood, Twelve O'Clock High, you name it. Really, The Mandalorian is the closest Star Wars has gotten to true west, a horse opera in the stars. It's not enough to put gunslingers and lowlifes into a spaceship and have them talk tough.

A western has raw elements: an unforgiving environment, rugged individualism, the value of hard labor or studied skill, the covenant of a negotiated deal, and the occasional blurring between bloodthirsty outcast and reluctantly gallant hero. But while The Mandalorian is something like a high fantasy Lee Van Cleef shoot 'em up, its star Pedro Pascal first cut his teeth in this particular genre mash-up in the indie sleeper Prospect, which plays closer to a small-scale John Ford or John Huston oater. In space.

Premiering at the 2018 South by Southwest Film Festival, Prospect was acknowledged as a promising-if-simplistic debut for Zeek Earl and Christopher Caldwell, the writer-director duo who built the highly stylized thriller with a budget under $4 million. And while the movie isn't exactly as dazzling visually as, say, Duncan Jones' Moon, it strikes a similarly rich vein of technical skill outside the mainstream and also manages to tell a damn good story with all the beats of a classic cowboy adventure.

Spacesuit sci-fi is hard to pull off without a studio paying the exorbitant amounts necessary for a unique world and realistic props, and Prospect seems unavoidably defined by the limitations of its budget. The Green Moon where the story takes place would look far too mundane--a typical lush Pacific Northwest forest floor of ferns surrounded by mossy hemlocks--but the perpetual golden-hour lighting and digitally added hazy layer of something like thick pollen is just enough to tip off a viewer that this place is different, and the air isn't right, and as beautiful and verdant as it may be, people do not belong there. Reveling at times in its mixture of several throwback aesthetics, with chunky 1970s computers reminiscent of Alien and weapons that border on steampunk with their eighteenth-century tribute designs and Buck Rodgers sound effects, it's hard not to think of the much beloved "Firefly" universe, mashed together with a Roger Corman B-movie. Everything down to the spacesuits looks heavily recycled and retrofitted, which feels right, but it also looks at worse times like our actors are backed by old air conditioners bolted to a set wall. Nevertheless, Earl and Caldwell make the rinky-dink work for them, drawing parallels between their own production endeavors and those of the desperate claim jumpers that occupy their story.

For example, the meticulous process of extracting the Aurelec gems (the prize awaiting our space prospectors on the Green Moon) from what appears to be a poisonous spore-coughing turnip made of chicken breast. It is one of the stranger things I've watched on film in recent memory. Bigger films might have made the intricate job the burden of sophisticated machinery, or a chance to show off some linchpin special effect. But instead, we watch as the actors cut and tear at jiggly meat sacks and carefully soak them in chemicals. It's not just inventive in the face of a small budget, it's purposefully and even defiantly small, as intimate and dirty as gutting and cleaning a deer. It's a smart narrative choice.

The headline of the movie is its lack of sleek effects or obvious production value, but the only real regrettable thin spots are in character development. Little time is spent fleshing out Cee, Damon, or Ezra beyond their immediate needs, and much how shoestring invention was required to build the world visually, the cast is tasked with drumming up most of their characters from scratch. As a result, Jay Duplass's acting is...what it is. Thankfully, his character's constant dependence on various drugs gives him a fragility and manic certainty of his actions that helps to free him from the casual-Friday energy that threatens to bleed into his technobabble lines. A little bit of backstory might have informed his take on the space-faring Gold Rush digger, but without any he comes off as not quite gruff enough, not quite desperate enough. I'm not going to call it too subtle, but perhaps too subdued for such a broad story.

Pedro Pascal, by contrast, is having fun swinging for the fences in the black-hat role, a halfway-sophisticated lowlife that studios only ever want to give to Ben Mendohlsen and Christoph Waltz. Pascal is terrific, affecting a kind of Dennis Hopper style of amiable, loquacious sadistic with more than a touch of Nathan Fillion's Malcolm Reynolds. While now known for playing the titular Mandalorian character on Disney Plus, it seems like Prospect might have gotten him that role. Pascal manages to walk a tightrope, never shying away from his character's ruthless nature while steadily endearing himself enough to root for him during the film's breathless third act.

The movie really does hang on Sophie Thatcher's turn as Cee, and I can see how the role would be quite challenging. Unlike the role of Mattie Ross in True Grit, Cee is not blessed with a sharp tongue or a naturally authoritative disposition. She's smart, but meek, and much like the Green Moon itself her delicate frame and sullen disposition hide how dangerous and cunning she is when cornered. As she's bombarded with ultimatums, orders, threats, and pleas through the tinny speakers of her headset, the audience is drawn closer into her fishbowl helmet to experience the disorientation and disarray with her. Thatcher has almost no dialogue by comparison to her costars, and so her vulnerability and the truth in her reactions have to speak for her. She nails it as much as anyone could, given the lack of text to chew on.

Not a plot-heavy movie, Prospect is one of those good old-fashioned calling card films; the writer-directors have crafted an atmosphere wholesale, using blunt instruments with a confident hand to prove themselves very capable of handling something bigger with a certain amount of their own flair. It doesn't seek to transcend its pulpy trappings, or...heaven forbid...extend itself into a franchise. As far as space westerns go, it's satisfyingly straightforward entertainment. Plainspoken, one might say.

This review is a part of Kyle's Letterboxd profile, which includes reviews and movie lists not covered here at the blog, including a ranking of several franchises and excerpts from the book, Cinema Autopsy, which is available on the Amazon Kindle store.