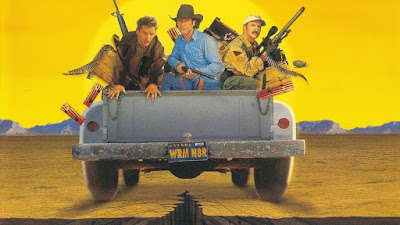 I remember distinctly during the early days of the DVD boom that one of my family's first purchases was Stephen Sommers' 1999 reboot of The Mummy, and that it was packaged with a free copy of Tremors. I guess someone in distribution tracking it as "Hey, these are both cheeseball throwbacks with respectable effects reels and a charming leading man performance" and I cannot disagree. But Tremors was an HBO and Sci-Fi Channel staple by 2000, so the need to own that disc was nil, and I am positive it's currently still collecting dust in my parents' cabinet as I type this. Possibly never having even seen the laser eye of a DVD player. That's kind of sad.

The only other thing I knew about the creature feature through my adolescence was that it spawned a Planet of the Apes-size franchise that could be found at any local video store, and a one-season television show. Hilariously, there seemed to be this consistent trend in straight-to-video franchises at the time where eventually when all other ideas were exhausted, it was necessary for them to go back to the Old West (see From Dusk Til Dawn 3 and I'd swear at least one late sequel to 1994's The Crow). Fittingly, much like the ancient and cunning gigantic worms it features, the Tremors series has stupendous staying power especially now in the streaming age, with the sixth film releasing on DVD, Blu-ray, and immediately onto Netflix in 2018. What a wild trajectory, especially since the original Tremors skews just a little too mainstream to achieve a completely cult-status. Now, the sequels? That's a different story. Kevin Bacon headlines a modest studio lark, while Michael Gross reps an offbeat genre mainstay that somehow survives the death of video store culture and the birth of streaming media.

Originally a $17 million movie set to film in Australia and star Bacon, Fred Ward, Gross, and Reba McIntyre all reprising their roles from the first film, Tremors 2: Aftershocks instead became a $4 million direct-to-video sequel starring a returning Fred Ward with Chris Gartin playing Grady--who spends the whole movie being called "the new guy." There is a supporting appearance from Michael Gross, and a prominent role for Helen Shaver, who went on to direct a metric ton of episodes of your favorite police procedural shows. And...no one else appears, really. While the first film had a perfect excuse to only have twelve characters total--and even hung a lantern on it--this one just feels a bit more like an Asylum production in terms of scale. I mean, keep in mind, $4 million is a lot more money back in 1995 than it is now, but The Jerky Boys: The Movie cost $8 million that same year, and does not feature puppets and CGI creature effects like this movie does.

Even more remarkable...the creatures in this movie look pretty damn good! Clearly the budget went almost completely to creating the second incarnation of the Tremors monsters, the bipedal "shriekers" that multiply like jackrabbits and overwhelm our heroes by swarming above ground. While the animatronic puppet shrieker has a nice tangible sense of surface texture and movement, it does look objectively like a puppet. There's no getting around that. The CGI renderings, meanwhile, look a little more like a video game sprite. But come on, these are pre-Star Wars: Special Edition computer creatures, on a $4 million budget. Am I grading on a curve? Sure! How can you not? On that curve, it's an admirable achievement, owing a lot to the creature's simple and effective design. The shriekers also prevent Aftershocks from falling completely into rehash territory. 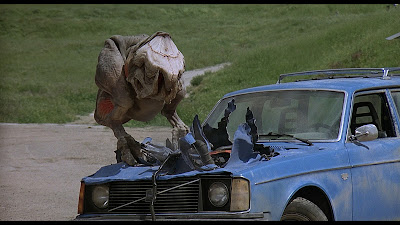 Over the course of the first act of the flick, it comes perilously close to being the cheapest Ghostbusters 2 facsimile ever arranged, complete with Fred Ward's character Earl struggling personally and financially in the wake of his depleted fame and fortune from surviving the first film. Earl's chagrined "same shit, different day" attitude might even appear similar to Bill Murray's typical impatient sequel face. Thankfully, Gartin's character balances this weariness out with a wide-eyed fanboy enthusiasm for monster hunting instead of attempting to ape Bacon's more cocksure cowboy swagger.

With a new younger partner, and Earl's expertise in fighting the creatures carrying over, it might have been enough to anchor another outing, But after about twenty minutes, it becomes apparent that Brent Maddock and S.S. Wilson wrote the stripped-down screenplay with an emphasis on...well, evolution. The monsters metamorphose into something new, and the human characters respond with more acquired knowledge and decisive action that helps the pace of the movie trot a little faster.

The first film follows the tried and true creature feature formula, with the opening half-hour devoted to the building of tension with several mysterious attacks, culminating in some splendid money-shots of the graboid creatures emerging in full force. Most monster movie sequels fail because they attempt to duplicate this sense of discovery; Tremors 2 cheekily upends this by spending its first half-hour with Earl and Grady expertly and casually blowing up over a dozen graboids, and then when the peril escalates with the arrival of the shriekers, the script emphasizes the same heroic traits so valued in the first film: ingenuity, preparedness (in the case of Gross's Burt Gummer), deductive thinking, and collaboration. 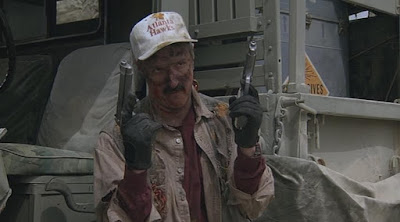 This is also the point in the series, I think, where Burt Gummer became the standout character. While a perfectly wry take on doomsday preppers and weekend warriors in the first movie, Burt is allowed here to blossom into something appropriately outlandish to rival the exaggerated forces of nature trying to scarf him down. In the absence of a big, expensive action sequence in which Burt mows down a pack of the vicious new bipeds, Gross gets the opportunity to screech up in his gigantic army truck covered in grime and goo and relay the details of his adventure with his practiced sitcom timing and a level of mania he clearly relished. Though the movie truly belongs to Ward, Gross kicks it into high gear and his arrival marks each turning point.

By comparison to the first film--and even most of the other sequels--Aftershocks is noticeably sparse. There aren't many memorable setpiece moments apart from a truly satisfying explosive finale, but it manages to preserve the balance of buddy comedy and old-fashioned rubber monster madness that make the first film so charming. And, more importantly, it brought a fresh and brisk plot structure along with some deepening of the series lore. While every Tremors sequel is going to be a cheaper and less magnetic reproduction of that first entry to a degree, it's frankly staggering how successful this one was at accomplishing its aims.