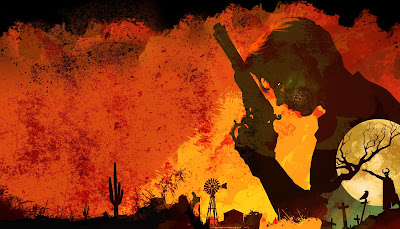 Outside Rockstar's densely packed open-world experiences in the Red Dead Redemption series, the Old West has been kind of a non-starter in the realm of video games in the last decade. The Call of Juarez series survives mostly on the blind devotion to first-person shooters from a strong contingent of bargain hunters, and every once in a blue moon a survival or resource-management sim might take on the genre. There seems a reluctance for developers to stretch the aesthetic and themes of the Western into a game type that doesn't immediately fit.

Originally released on PC in November of 2015 after a successful crowd-funding campaign, Hard West seeks to achieve that stretch, and the Nintendo Switch's E-Shop seems like a terrific fit for it. The 2018 port includes the DLC pack "Scars of Freedom," and takes the game mobile. That alone peaked my interest, even if the game hadn't been on sale for an astounding $1.99 at the time. As it stands, the content is more than worth the full $9.99 price tag.

The elevator-pitch is X-COM with grizzled gunslingers and deadeye outlaws, but really it aims higher than that. Characters have fully realized backstories and narrative goals, and the plot unfolds across multiple intersecting arcs much like a complicated comic book storyline. A classic good guy cowboy is massacred and comes back to life half-zombified to seek bloody revenge, meanwhile a scientist seeks to cure the land of a ghoulish plague of violent insanity. Death and The Devil preside over the events, while any crossroad or woodland shack along your travels may offer a fateful deal that changes your fortune or to simply swindle you out of your resources. It's an ambitious piece of game development that takes a surefire hit concept and grafts some more risky ideas onto it. And for the most part, those riskier ideas pay off. 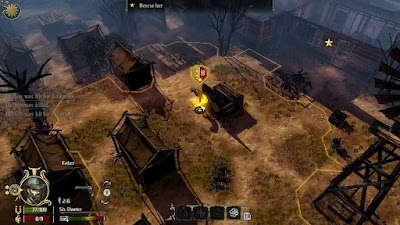 I'm far from a purist when it comes to horse operas, but the "Weird West" or supernatural Lovecraftian gunslinger thing is far less novel to me than the average consumer. I feel the same fatigue for it as I do for post-apocalyptic zombie survival yarns, and I find that injecting this sort of monster-hunt gimmick is usually cheap and lazy. Having said that, the added supernatural elements do act as a wild card that gives Hard West more of its own personality, distancing it from X-COM's purely tactical style of gameplay. Rather than rely on a random number generator, the action segments of the game employ a "Luck" stat for each player and enemy character that drains considerably when they manage to dodge enemy fire, and fills back up again when they are hit. But along the way, spooky artifacts and western-themed items--like a cursed amulet, or a simple plug of tobacco--can alter stats to increase one's aim, fill up their luck, or give them an extra chance to shoot. Even munching on a freshly dead enemy's flesh has restorative properties once your antihero becomes a member of the walking dead. Playing Hard West with these elements in full swing feels less like calculated maneuvers and more chaotic and organic.

Even beyond the character's loadout, choices made during the map/exposition segments can affect their performance positively or negatively during combat. Say, if you made the choice to rob someone along the trail or dig up a cursed artifact, you may be stricken with sleeplessness or crippling guilt that makes you slower. Luckily, there's also the card system. See, along the journey you come into possession of playing cards that can assign abilities to characters as well. Say, the ability to drain everyone's HP to one, to even the odds against an invincible demon. Or perhaps the ability to heal on every turn as long as the character is positioned in shadow instead of sunlight.

These light RPG elements of the game are all novel concepts, but there are too many of them and they are each undercooked, pure and simple. It's fun to customize your characters and use their abilities, no doubt. Perhaps more of a Diablo-like looting mechanic, or a Borderlands-style random generator for unique items would have given more narrative weight to these items and cards. But between artifacts, the card system, and the Luck mechanic, simpler concepts like buying new weapons or even seeking money at all seem like a waste of time. Early tasks emphasize how hardscrabble and desperate the player is, mining for gold and hoping to spend the profits wisely, but this is never again revisited once the violence kicks up and the same characters become unstoppable killing machines. 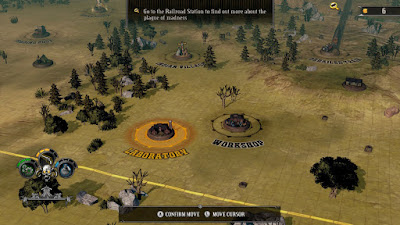 The turn-based strategy gameplay itself is spot-on, a clean lift from Enemy Unknown's brand of careful urgency and spacial awareness. I wish the same could be said for the between-combat sections, which take place clicking through a bland map and reading a whole bunch of repetitive text. While X-COM achieved the impossible and got me heavily invested in the development of my tactical facilities and research projects in between combat missions, Hard West lacks so much in presentation during this "map mode" that it may as well have been excised entirely and replaced with static exposition text with choices for me to click on. It's a disappointing and jarring tug-of-war between a stylish and polished turn-based action adventure, and a completely functional and altogether bland Steam Direct click-along experience. And over half the map is devoted to shops, which as I mentioned are not altogether relevant once a decent collection of weapons and abilities is stockpiled.

For such a small indie project, developer CreativeForge made a lot of impressive choices that resulted in a game with far more polish than it appears. The voiceover narration is slyly written and performed, and the art direction is undeniably stylish. There is a sense of presentation to almost every aspect, and the actual meat and potatoes of the gameplay is engaging and fun. It's got thin spots, but until the X-COM 2 port hits the Switch later this month, Hard West is a worthy attempt to scratch the same itch, and from a different angle.