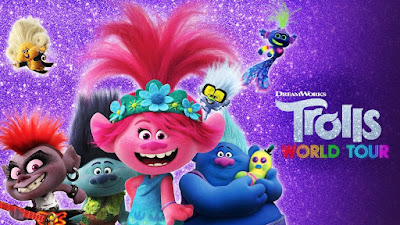 If it's true that the circumstances behind the unorthodox new way films are being released are a bell not to be un-rung, are we really going to remember Trolls: World Tour as the errant arrow that felled the box office as we know it? Much like the first film of this new children's franchise, it's not an offensively bad watch, but it's so inconsequential that I can't imagine anyone would remember it at all beyond its unique release circumstances. It's destined now to be a trivia question, like the disastrous returns on all the films released the weekend of 9/11. But divorced from this fate, how is this little bubblegum musical?

Taking the relentlessly upbeat, technicolor world of the first Trolls film and using it as a staging ground for a (highly simplified) Tolkien-like expansion of world-building, with powerful relics and unfamiliar cultures, double-crosses and a race to save the world from a zealous tyrant is...well, you know what, it's misguided, but at very least this sequel isn't your classic Shrek or Ice Age style of rehash, consisting of anemic pop-culture references, stunt casting, and desperate second helpings of the first film's biggest moments. It does have all of that, but in more respectable, smaller doses. And rather than try to anchor a second outing entirely on the good will of the first, World Tour does invest more in its fantasy-driven plot than anything else. I appreciate that, but...I mean, this is Trolls. Why does everything need to become another exercise in strained mythology? This could have easily been just Trolls Go on a Tropical Vacation or Trolls Vs. The Hug Monster and it would have had exactly the same result.

The movie does go out of its way to give some additional depth to the established characters, but it's hard to fit that in while adding more names to the cast and explaining a ton of backstory. While Poppy (Anna Kendrick) and Branch (Justin Timberlake) continue to function as a duo with dueling character flaws--hers being a naive faith that everyone is universally good and want all the same things as her, while his is an unshakable vision of worst-case scenarios and distrust in all things--the strain of their relationship has less to do with this setup and more to do with a mundane "does she like-like me" romantic arc. Timberlake is good at using his voice to convey vulnerability and add energy to his dialogue, and Kendrick has proven wholeheartedly that she can anchor a musical with her charm and singing talents. So, for the most part, this returning two-hander formula works just fine, even if it takes the easiest route possible.

Meanwhile, Ron Funches' four-legged Cooper searches for his own answers to why he's an entirely different character design from the rest of his Pop Music Troll community. That the majority of his journey and the revelation of his origins are tossed off in a quick monologue to catch up the other characters, because he's been missing from the film for fifteen or twenty minutes, is a real waste. Had World Tour used Cooper's background (a Funk Troll who merged successfully into the Pop world) as the A-plot to reveal the bigger picture of six separate kingdoms and their tumultuous history with each other, there may have been more sense of discovery and wonder attached. Instead, the whole thing is delivered to us disaffectedly in the opening few minutes by the first film's "Cloud" character, who...I still don't quite understand.

As for newcomers, there's an embarrassment of riches that aren't utilized nearly enough to justify their presence. Rachel Bloom is wasted as the one-dimensional villain, Hard Rock Troll Queen Barb, who never rises above the shtick of her designated music genre. Really, none of the new characters do. Bloom is a no-brainer for one of these movies, but again...wouldn't it have been smarter to just build the plot of the movie around her as the lead? I understand that it's a kids movie, and the familiar faces have to return, but I'd swear more of the film hangs with Bloom than with our returning Trolls, anyway.

I've definitely over-thought this movie, but I feel entitled to do so, as it seems to have unwittingly ridden the COVID-19 malaise train right into some glowing reviews that all summarily state "Do yourself a favor and watch this movie, it's a light, breezy injection of joy that we all need right now." And that's not untrue. Kids were robbed of several big cinematic experiences this year so far, and the hype for this one with the under-8 crowd is palpable. It delivers on what the intended audience wants, even if it feels like a marketing exercise more than an actual movie.

Musically, the film aims to be more diverse and to even hint at something about cultural appropriation and how certain music genres birthed from others. It doesn't quite hit the mark on any of this, because even the covers of rock staples like "Crazy Train" and "Barracuda" have that "Glee" affectation, where all the hard edges have been sanded down. But Kelly Clarkson gets a welcome melancholy country croon number, and the opening techno beats of "One More Time" are a real Kidz Bop party track. The music seems less integrated into the film itself, almost like the licensing for the various songs was the last bit of business done. But it's fine. Timberlake does a great job as the music supervisor on these movies, even if World Tour lacks the show-stopping moments of the first film's "Can't Stop the Feeling."

The animation is, yet again, crisp and visually engaging. Of particular merit is the Mad Max: Fury Road aesthetic of the Hard Rock Trolls as they barrel across the landscape in a convoy of gigantic vehicles that merge the look of a rock-n-roll tour bus with that of a makeshift tank. This is polished animated work, and somehow takes place in the same movie as the completely separate underwater Techno Troll world, which dazzles in the opening few minutes as a bio-luminescent underwater reef rave. Storyboarding happened here, and the hard work should not go unnoticed. But just like the first film, I wonder how much of it was worth the final result, which is a trifle of a story that (you know, if not for indefinite confinement) I'm not sure anyone could remember beyond outside the toy aisle.

Given the choice, I would advocate for a rewatch of the first Trolls over World Tour. The first film has the better soundtrack, the less grandiose of plots, and more time for its stacked voice talents to shine. But, like everyone else writing a review of World Tour, I can't help but say that this is indeed a colorful, peppy kids film that will definitely kill an hour and a half and make your forget why you didn't go see it in the theater for twice the price. So, hey. That's a mark in its favor, right?


This review is a part of Kyle's Letterboxd profile, which includes reviews and movie lists not covered here at the blog, including a ranking of several franchises and excerpts from the book, Cinema Autopsy, which is available on the Amazon Kindle store.
Labels: blog letterboxd reviews movies