I typically cringe at the prospect of taking a real-life event full of tragedy and dramatizing it for the compelling entertainment value. A movie about the Boston bombing, or 9/11? Hard pass. A television show where Oscar and Emmy-winning thespians portray all the major players of the O.J. Simpson trial? Er...look. I know we're all locked inside and need something to stare at, but didn't we all stare at these real-life events enough when they happened? Never quite losing that nagging rationale, I will say that the Paramount Network's big splash of a miniseries "Waco" does its very best to justify its existence by trying to shed some light on an event so mired in misinformation and uncertainty. It also helps to answer the question, "What in the heck is 'The Paramount Network' anyway?"

Based on books by both head negotiator Gary Noesner and surviving Branch Davidian member David Thibodeau, the miniseries seeks to portray every point of view possible in a story where many of the most pertinent facts have been lost or permanently obfuscated. It could be argued that life inside the Mt. Carmel compound was heavily romanticized and sanitized in an effort to draw the audience further into investing in the senior members of the group as characters. Apart from David Koresh himself, no member of the Branch Davidian community is ever painted in a villainous light, and great pains are taken to portray the initial gun battle and the tragic final minutes of the group's demise as entirely the fault of the interloping authorities. But this is exactly my initial reticence; this is not a documentary. It's a dramatic miniseries, more concerned with emotional truth than objective fact.

As a production, it is far more impressive than I anticipated. Paramount--or more specifically, their parent conglomerate Viacom--insisted on the John Hammond method of sparing no expense to fully pivot the former TNN/Spike channel into their personal premium-yet-basic prestige cable outlet, much in the same way Fox pivoted FX from reruns of "COPS" and "MASH" to glitzy original series fare. As a debut for this change, "Waco" is a big swing. It has all the clout of a major box office release or an HBO special event, and the visuals make as much as they can out of the sweeping helicopter shots of the Texas prairies and the voluminous recreation of the cult compound. But as polished and cinematic as it looks, the true anchor to the series comes in the form of lead performances.

Taylor Kitsch has spent a full decade trying to escape the shadow of his "Friday Night Lights" character, Tim Riggins. Starring in big-budget fantasy epics, US military rah-rah alien battles, and even a muted, haunted turn as a traumatized cop in the sophomore slump season of an HBO series couldn't convince audiences that he had outgrown the teen-heartthrob status that started his career. Here, playing the infamous personal Jesus-slash-Manson of the Branch Davidian commune, Kitsch has finally nailed a role that solidifies him as a capable actor. Ironically, David Koresh is a role that requires a lot of the same tightrope acts that Tim Riggins did: he's authoritative (even despotic), yet soft-spoken and cordial. Charming, but also off-putting with his penetrating stares and superficial concern for others. Both characters seem ready to walk through fire for a total stranger, just out of Texan gallantry...but both grasp desperately to their carefully concocted personas, and anguish far more over other people's perceptions of them than their actual misdeeds. 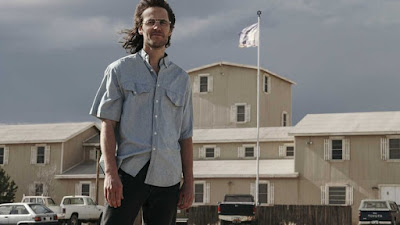 Shedding his trademark bulky physique for the wiry, more haggard look of his subject, Kitsch drives home exactly how over a hundred seemingly rational people could fall under the sway of a man who fancies himself the Lamb of God...Koresh was able to use his very real vulnerability and his persecution complex to feed his followers' faith in him as an underdog champion of their beliefs. Kitsch similarly seems to use his unlikely casting as this meek, often pathetic wannabe messiah to his advantage, preying upon an audience's expectations of a wild-eyed kook and surprising everyone with the very grounded, enigmatic depiction that skews much closer to the well-meaning, dorky rock-n-roll youth pastor.

On the opposite side of the yellow tape, we have Michael Shannon also turning in an atypical performance as the straight-laced, sweater-clad Gary Noesner, the FBI's foremost negotiator who wrote the book on barricaded suspects and hostage-like situations. Shannon, as I've previously written, has had a storied career as various ne'er-do-wells, wackos, and weirdos in everything from the Dark Twain thriller Mud to even playing grandstanding intergalactic war criminal General Zod in Man of Steel. As Nasau, Shannon seeks to epitomize everything about the old FBI, the hallowed crime fighters who used to win the day via expertise and analysis. As such, even before the colossal blunders and willful ignorance of the ATF and FBI even come into play, Shannon plays his character as exhausted by the changes being made to his agency's approach to crime, and patiently beseeching a turn back to the righteous path.

As someone who knows the next five moves in a chess game before they happen, he can already see the Waco incident coming before ever even reading Koresh's name in a file. Shannon does tremendous subtle work, letting the negotiator's patience dwindle slowly and his passion for preserving lives--even the lives of the supposed "enemy"--boil over into outbursts or discord that might take place in any high-stakes office setting. Shannon maintains throughout, even in the final scenes where it becomes clear that the unthinkable has become inevitable, that to Noesner the Waco case is a job, and he is a professional.

Going into the writer's room for "Waco," creators Drew and John Erick Dowdle--purveyors of claustrophobic, tense thrillers like As Above, So Below and No Escape--were tasked with taking the 51-day standoff in Waco and condensing it to a somewhat traditional six-episode arc. With that constraint to the pace of the series, it's actually quite remarkable that we get as much staging ground and organic development of our lead characters as we do. Gary Noesner's involvement in the similarly disgraceful Ruby Ridge incident is an important building block that signals the audience that the FBI and ATF are not bastions of truth or justice in this story. I will concede that while John Leguizamo's portrayal of a conflicted undercover ATF agent in the early stages of the investigation is one of the actor's best pieces of work in years, it comes to very little consequence once bullets and scripture starts flying. It is smart narrative architecture to portray the Branch Davidian way of life through the eyes of newcomer Thibodeau, and Rory Culkin does fantastic work in the role, but I wonder how the portrayal of the federal agents may have felt if given a similar audience-surrogate character. Would an audience accept the FBI's actions as freely as the Branch Davidians' if half the series was through the eyes of an idealistic, wide-eyed agent? At very least, more perspective from Shea Wigham and Glenn Fleshler's outright villainous FBI coordinators might have helped the series feel less like a season of "Justified" in spots.

Ultimately, I was proved wrong by "Waco." Though based on haunting and heartbreaking developments, it's undeniably a binge-able, engrossing piece of television. A steamrolling locomotive of pure dread in its best spots, it had me sneering and muttering at the screen when terrible decisions were made and cowardly choices became irreversible. At other points, particularly near the climax, the depiction leaned toward bits of cynical manipulation, but that's hardly a crime when David Koresh is your subject, is it? While the series succeeds in delving into a frank discussion of the FBI and ATF's raw need to land a big headline-grabbing case (due process and innocent lives be damned), I did find it a tad irresponsible in going so light on the Branch Davidians' raw need to consolidate lethal force and provoke their foreseen "bloodletting" (federal law and innocent lives be damned). But it was undeniably compelling, even if I feel like I need a shower after calling it "entertainment."