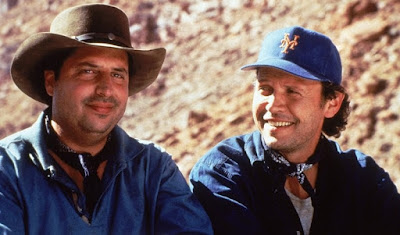 In the summer of 1994, movie studios clearly thought they had found a hack to bring back the Western genre as a viable box office mainstay. The scam? Hide your horse opera inside a mid-budget comedy. Check out this list: Lightning Jack, Maverick, The Cowboy Way, and Wagons East! all released between March and August of that year, as did City Slickers II: The Legend of Curly's Gold. And to paraphrase many critics and audiences at the time, didn't we say all that we could say with the first City Slickers? Is it reasonable to make an adventure franchise out of the 1991 midlife crisis comedy that just so happened to take the box office by storm?
Owen Gleiberman really hit the nail on the head in Entertainment Weekly's review of the film. He wrote, "City Slickers II is pleasant but vacuous — The Treasure of the Sierra Madre replayed as a lightweight yuppie caper...I vegetated amicably at City Slickers II, but there’s still a desperation behind the movie’s innocuousness." He gave it a C+, and that's honestly one of the most measured and reasonable responses to a dud sequel I've ever seen. At its heart, it's exactly the kind of slapdash sequel I would accuse of recycling bits from the original, only instead of merely doubling down on a solid gag from the first film, more often than not the sequel is content with burning time recounting the first film through dialogue. Tony Soprano is right; "Remember when" is certainly the lowest form of comedy, if not conversation.
Really, The Legend of Curly's Gold is one of those all-time dorkiest sequel subtitles that communicates exactly what makes some sequels so lowly: it's a clear indicator that there were no elegant, organic ways to continue the story. Someone literally just said, "I dunno, what if Curly left a buried treasure for the New York guys to find in the old west?" And we are cynically off and running.
Tony Soprano is right; "Remember when" is certainly the lowest form of comedy, if not conversation.

There are some positive attributes to The Legend of Curly's Gold, though. Yes, I'm going to defend this absolute afterthought of a '90s misfire. For one thing, Jack Palance is a fully fledged co-star this time around, with double the jokes and a huge jump in screen time. Palance won an actual, honest-to-goodness Best Supporting Actor statue for his mere 12 minutes on camera as Curly in City Slickers. He uh...he didn't win anything for the sequel, but I'm betting his re-negotiated contract was a real win. As Curly's identical (in both body and personality) twin brother Duke, Palance appears about 40 minutes in and rides along with Billy Crystal through the end credits. He's a magnetic screen presence throughout, even if he does seem slightly irritated to be present for the proceedings. 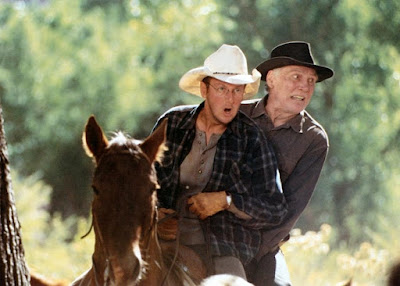 And I will mention that replacing Bruno Kirby's enthusiastic playboy from the first film with Jon Lovitz as Crystal's doofy layabout brother is actually a very smart choice. Kirby's character is the least essential of the first film's trio of urbanites, his midlife crisis arc boiling down to "Oh no, I've married a stunning younger woman. But how can I maintain my freewheeling lifestyle of adventure vacations, casual sex, and business success if I have to...become a family man???" It's pretty frivolous. Lovitz has little to do either, beyond reciting Godfather II dialogue and driving both the wagon and all the antagonism amongst the treasure hunt. This was right smack in the middle of Lovitz becoming a possible star--after his memorable turn in A League of Their Own the year before--and while his take on loutish, perpetual tagalong little brother Glenn is well-worn territory, it provides a little more manic energy to the ensemble. That's important, because a feature film cannot hang solely on Billy Crystal's withering wisenheimer output. We found that out the next year with Forget Paris.

Is the plot a total rehash? No, not in purely mechanical terms. While City Slickers concerns middle-aged men chasing a comically pre-packaged adventure and accidentally stumbling upon a more perilous one that helps them grow, The Legend of Curly's Gold is embarrassingly even more face-value than that. Instead of the characters being driven by their insecurities, their malaise, and their desire for nostalgia, it would be charitable to say that Crystal's character is partially driven by his hero worship of Curly, the man who changed his life and then swiftly died. This potential sense of loss or rumination on mortality might have been an interesting idea if it were explored at all, and perhaps if the sequel had been done ten or fifteen years later when Crystal et al were on the steps of senior citizenry. But no, Sony/Columbia/TriStar/Whatever was having a really rough couple of years and needed something predictably profitable at the box office.

Instead, once the buried treasure plot kicks in, all semblance of using the Western archetypes as metaphors for mid-life crisis is swept away in favor of just repeating said archetypes for the sake of fun. They almost burn the fabled treasure map...because that's fun. They get caught in a stampede of wild horses, just because something exciting needed to happen. And most ridiculous, we get a lethargic Indiana Jones riff in the form of a runaway minecart sequence that fails to generate any stakes or tension. That sounds like something that should happen in a treasure hunt Western, right?

This potential sense of loss or rumination on mortality might have been an interesting idea if it were explored at all, and perhaps if the sequel had been done ten or fifteen years later when Crystal et al were on the steps of senior citizenry.

I'm not casting stones; the 1990s was a vulgar era of comedy sequels. The faster and cheaper it was cranked out, the more outlandish the premise, the flatter the performances and recycling of jokes...the typical missteps of such video store and cable filler as Weekend at Bernie's II, or Beethoven's 2nd, Major League II, or Father of the Bride, Part II. It was a desperate time when the studio was happy to feed the audience's businesslike search for a return on their investment. The right combination of reliable star, familiar plot structure, and recitable jokes was a guaranteed smooth production with a predictable enough profit margin, and pre-internet, pre-streaming audiences had fewer options.

But all in all, City Slickers II: The Legend of Curly's Gold is not hidden treasure, so much as some loose change you found in the couch cushions. It'll pass the time for you. The jokes are sturdy enough, but there is less genuine heart to anchor them. And when things get very comedically dire, the script's first instinct is to lean heavily on the good memories of the first film. This is the fundamental failing of a rehash sequel: a movie should never remind you of a better movie you could be watching.