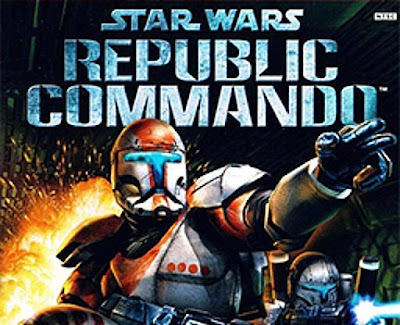 It's astonishing how much of Halo: Combat Evolved leaked into the console gaming biosphere of the early aughts, and yet Star Wars: Republic Commando doesn't feel terribly derivative or dated by its obvious parallels. The squad-based tactics and Star Wars flavoring of weapons and characters gives a fresh enough coat of paint to distinguish it from the defining FPS of the era. Sometimes that's in the game's favor, like when every pesky kind of battle droid invades the hanger of a disabled Republic cruiser and you must balance turret suppression alongside strategic explosive use. Other times, it is easy to miss the Bungie classic's larger variety of weapons, expansive open maps, and...this is Star Wars, why are there no vehicles at all?

At the time, the Call of Duty and Halo variants were establishing a somewhat universal system for weapon loadouts--two weapons at a time, chiefly--and automatic health regeneration. LucasArts took Republic Commando in different directions that remind me what we lost to the increasing homogeny of the genre. Stationary Bacta terminals throughout the game restore health, sometimes making them the unofficial save points throughout the campaign's three extended missions. This mechanic pushes a player just an inch or two closer to feeling desperation and forcing them to rely on tactics instead of just spray-and-pray from behind cover.

While equally as spartan in design, the weapon system may not have the same kind of inventive spirit. Leaning into the tactical theme of the game, the player possesses three or four weapons at a time, but more precisely it's one gun with three different attachments: sniper rifle, assault rifle, and grenade launcher. Later on, a stray enemy shotgun or heavy machine gun can be picked up. One could say that this is an attempt to steer players into planning and picking the correct weapon to suit the situation, rather than encouraging a variable style of play. While some of the greatest first-person-shooter games give the option to be silent and stealthy or loud and explosive, or fast and rapid-fire...this game is on quite a few extra rails.

I don't know if it was just a problem of mapping an original Xbox control scheme to an Xbox One controller, but there is a disconnect between the amount of control over your squad that the game expects of you versus the amount of control you really have. While each character has their own special skill (demolition, sniper, and technician) that you can deploy, all three NPCs and the player character are capable of deploying to each task, albeit with varying wait times. The real difficulty is catching the right clone brother when he's closest to the door that needs breaching, the terminal that needs hacking, or the cover position that needs suppressing fire. The squad orders have sophisticated controls to them, but during a firefight it's not terribly easy to access.

In terms of tone, Republic Commando succeeds where the Star Wars prequel films that spawned it fail miserably. The brutality of a galactic war feels real through the eyes of four brothers lugged around from one impossible task to another. Their only remarkable powers are their precision and their work ethic, there's no mystical destiny at play. It's war, and soldiers can die. While the films seemed to struggle to differentiate the clone soldiers from their droid enemies as characters, this game rounds out the personalities of four protagonists in a more satisfying manner, and even plays with the concept of their humanity against the backdrop of the lofty political schism that led to their very creation.

The characters have chemistry, although it suffers from the same bland oo-rah tough guy lingo as any Modern Warfare pretender. Essentially the same "Watch your six! Tango down!" kind of stuff. "Loadout Culture," I'm starting to call it in my head. Once you get past that, and the fact that all four distinct characters are clones of a dead man with some kind of special DNA enhancements, it starts to feel like any other war movie plot. They made Attack of the Clones into Saving Private Ryan. For 2005, that's an ambitious enough idea, and it makes up for the abrupt pacing of the campaign that comes out to perhaps under 10 hours across only three missions.

While clone trooper lore is one of the better things to come out of the prequel Star Wars era, I'd be remiss if I didn't say that your time is better spent on Pandemic Studios' Star Wars: Battlefront II from the same year. Both games feel indebted to Halo, but while Republic Commando fails just slightly to come equivalent to Master Chief's first campaign, Battlefront II has just enough Star Wars veneer and variety of play to be comparable with the multiplayer mode of Combat Evolved.

Both games are available through the Xbox Marketplace for $9.99 each.