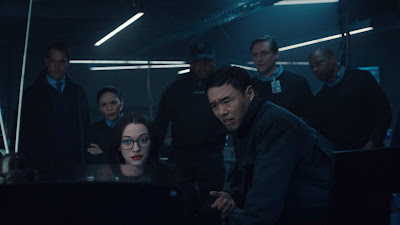 Television has very specific rules as a medium for mystery. On network television, characters who solve mysteries typically develop over years, using their cases of the week to highlight their feelings or personal life in small snippets. On cable channels, they get away with a lot more introspective things, like a character's vices, fantasies, or their inner struggles. As the next big flagship original series for Disney+ as well as the first full-fledged Marvel Cinematic Universe story since 2019, "WandaVision" has a short episode order and a movie-size budget and cast. How does this format change the way a television show approaches the investigation process? How does "WandaVision" step outside its weird reality and fast-forward through the introduction of the folks who need to solve the mystery from outside Westview?

It reintroduces Monica Rambeau, for starters. See, this is perfect, because Monica is a previous character in the MCU run of blockbuster films, but she was a little girl and it was 1995. So, we get a fresh new character, essentially, but with a rich backstory already filled in. Teyonah Parris manages in very little time to ground the role in both vulnerability and adaptability. She is a veteran of network and cable TV, and it's curiously plausible to see her Rambeau fall into a heavily-syndicated "Law & Order: MCU" detective role, or the thickest of high-concept cerebral prestige detective drama--think "Philbert" from latter seasons of Netflix's "Bojack Horseman"--and be just as compelling a lead protagonist in either. Captain Rambeau is the daughter of Maria Rambeau from Captain Marvel, who was to SWORD what Peggy Carter was to SHIELD. That's cool, and it helps bridge the gap in between the Infinity era and whatever Phase 4 might have coming. Turns out, over the last decade, audiences have responded positively to that sort of narrative synergy.

But chiefly, Rambeau is one of the disappeared from the fateful Thanos finger-snap. While the "blip," as it is referred to, has been explored logistically in Spider-Man: Far From Home only slightly, now we get to see the traumatic experience of ceasing to exist and then reappearing five years later in the exact same spot. Makes me wonder...folks who blipped from an airplane, or a cruise ship, or perhaps a demolished building, how and where did they return? It's a disturbing implication. But don't worry, there are plenty more where that came from. In the meantime, Monica has a lot brewing in her head with being absent for her mother's death, being grounded from flight duties, and now being yanked into whatever the heck is going on in Westview, New Jersey.

Fittingly, our "lead detective" of sorts has a trusty investigation team, which consists of characters wisely repurposed from other corners of the MCU. Just like Wanda and Vision themselves, Jimmy Woo and Darcy Lewis are dynamic enough characters to be winning leads themselves, and this series gives them that opportunity at least this week. Randall Park showed in Ant-Man and the Wasp that as Jimmy Woo he can really sell a dignified dorky dad energy without compromising his charm or his authority as an FBI agent. Simply put, Park succeeds as Woo the same way Clark Gregg succeeded as Phil Coulson, by putting his non-superheroic character's ordinary goodness front and center. And then there's Kat Dennings, who was at times the saving grace of Earth-bound scenes in the first two Thor movies as Darcy. Somehow effervescently acerbic, the character has graduated both literally and figuratively as a doctor of astrophysics who is no longer relegated to being the designated young person obsessed with her iPod and her social media. Audiences seemed to jump at the idea that Woo and Darcy could headline their own "X-Files" style of mystery-of-the-week series, and I think the reason why is that both performers commit completely to the reality of a workplace comedy inside a mystery series inside a comic book universe. It's not an easy task.

I get the need to pull away and show the first three episodes and their overarching mystery from this outsider perspective. The "WandaVision" episode formula as we've seen it up to now is a thrill, but is also unsustainable unless the lay of the land is eventually revealed. By showing the SWORD investigation through the eyes of Captain Rambeau, Woo, and Darcy, we get a firm grasp of just how potentially horrifying the sunny sitcom construct might be, especially because all the citizens of Westview are real people and Wanda herself is somehow using her telepathy powers to create and control it. Having established all that, this episode does suffer from the absence of its title characters, and their warm-and-fuzzy place in that construct. The first three episodes achieved this dazzling balancing act of tone and aesthetic and implication that this episode eschews in favor of satiating audiences with some of the straightforward answers they crave. While that itself is yet another deliberate deconstruction of television as a storytelling medium, and it works great as the mid-point of a series arc, it feels like less of a magic trick.