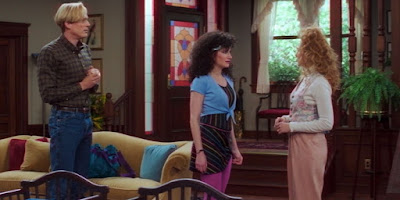 We are in the back half of the eight-episode arc of "WandaVision" and as the eras of broadcast television zoom by, we are rapidly approaching that age of fan speculation and dangling plot threads that defined peak viewing in the mid-'00s. The "Lost" and "Heroes" and "24" days. Granted, those weren't sitcoms, but "WandaVision" strikes a similar note to them; the "mystery box" of it all is particularly well-designed, and has resurrected the appointment-television model in a way even "The Mandalorian" hasn't. That makes me a little nervous, however.  I'm waiting for the moment when this show must spend the better part of an entire episode explaining the mechanics of all of this--how is Wanda controlling not just the perceptions and thoughts of Westview's inhabitants, but now the raw reality of anything inside the Hex? How "real" and "sentient" are Vision and their twin boys, if they cannot exist outside the illusion?--and I worry that the answers we will be given won't live up to it, because that's also a cornerstone of those mid-'00s potboilers.

But for now, it's the 1980s, when "very special episodes" started happening every single week in a bid to attach an emotional learning moment onto every morsel of entertainment that might be consumed by young, impressionable people. The Reagan/Bush era (much like today) was obsessed with how much screen time was invading the family unit, and took great pains to imprint as much hugging and learning as possible. "WandaVision" takes this cue and absolutely nails this week's opening titles, with pure "Family Ties" and "Full House" schmaltz in the theme song and Tommy and Billy in prime Michelle Tanner age and persona. Not only is that hilarious because Elizabeth Olsen is sister to Mary-Kate and Ashley, but also because this opening serves very nicely to signal the audience, as well as Vision himself, that the sitcom world he occupies is becoming more cloying and artificial. The emotionally cheap styling of the era fits nicely with Wanda's increasingly desperate bid to control the emotions of everyone inside the Hex, to preserve the ideal life she feels entitled to.

That desperation even extends to her new bouncing baby boys, who refuse to sleep, as babies are want to do. Eventually, the sitcom construct provides a perfect solution: the TV trope of aging the boys up to 5 instantaneously, just as with baby Andrew ("Family Ties") baby Nicky ("Fresh Prince of Bel Air") and baby Chrissy ("Growing Pains") before them. This aging gag distracts a bit from the much more horrifying aspect of this scene, which is that Wanda is willing to manipulate even the babies with her powers. They resist her seemingly omnipotent mind control, curiously, which might make them the key to ending her hold on Westview.

That control appears to be slipping already, as neighbors like Katherine Hahn's Agnes are breaking from character, and Vision himself is starting to question the abbreviated, simplified, hand-waving excuses for the reality he lives in. Hahn is doing terrific work, not just because the actress herself is a real secret weapon on normal television shows, but also because of the jarring juxtaposition between the happy-go-lucky neighbor pixie that Wanda has cast her as and the clearly confused and terrified person struggling to break out. It's a difficult acting exercise to play a character who is being forced to play another character, and showing both with the same level of commitment and sincerity.

Outside the Hex, Monica Rambeau confirms what Agnes shows in her eyes about the experience of being Wanda's cast and crew: it's not consensual. It's terrifying. And it hurts. While the SWORD investigation side of "WandaVision" lacks the sly visual flair and the foreboding tension taking place inside the mysterious bubble, it makes up for it by providing comic and narrative relief. Rambeau takes her position as the leader of Darcy and Woo's little Scooby gang, showing a level of empathy with Wanda that Monica's backstory informs. Rambeau came back from the five-year blip to the same grief Wanda did, after all. This is good plotting, and it gives us someone concrete to root for. Meanwhile, SWORD Director Tyler Hayward falls into his position as the series'  stock government stooge antagonist, and it feels quite empty. He labels Wanda as a terrorist and begins re-framing the investigation into a half-cocked Waco standoff, because...well, because we've only got three episodes left and someone has to hold the "unreasonable idiot strawman" ball in order for things to escalate to a big showdown. Admittedly, this has always been a Marvel Cinematic Universe weakness; the first Avengers film gave us the vague World Security Council, and General "Thunderbolt" Ross hangs off the entire meta-franchise like a vestigial appendage specifically so there can be a straight-laced normie to treat our beloved special folks like criminals.

I am very glad that this show is acknowledging Wanda's trauma outside of the people she has lost. The mention of Lagos, where Wanda caused the deaths of some civilians during a big mission in Captain America: Civil War, might be the puzzle piece that Rambeau and the SWORD team are looking for. Wanda feels immense guilt for the things she's done wrong, and that's partially why she's created this pocket universe where everything is peachy keen inside 22 minutes. But how can our intrepid agents and scientists get through to her that what she's doing is outright maniacal? Vision himself can't even break that barrier. And why is that? It's probably because Vision is actually super-dead. Dead forever, gone for good. Wanda has brought him back, but not for real...the Vision we are seeing inside the Hex very well may be just a shade, as much part of the construct as the theme music and the canned laughter. Okay that would make total sense, but he is rebelling against the "script" just as much as any of the very real people trapped in Westview, and their twin sons show signs of being real as well.

Olsen and Paul Bettany make such a meal out of the final confrontation of the episode, somehow keeping this superpowered couple's extremely weird problems as relatable and organic as possible. Shouting phrases across the kitchen that are familiar to many a troubled marriage, "Stop lying to me" and "you've never talked like this to me before," and so on. It's a concrete example of why these actors and their characters deserved this series. Olsen is playing Wanda's self-denial somewhere between a drug addict and a werewolf, and Bettany responds in turn by allowing Vision--a character not accustomed to confusion or uncertainty--to lose his composure and abandon his precious statistics. Series director Matt Shakman lets this fight play out while the cutesy end credits to the 1980s "episode" scroll over it, which is a very simple but effectively haunting reminder of how artificially tidy a sitcom episode's denouement always is.

And then there's the surprise visit from...Pietro.

Evan Peters played Quicksilver in three X-Men movies, his parallel existence with Aaron Taylor-Johnson's MCU version one of the more strange and messy aspects of the Marvel comic book movie gold rush of the last twenty years. Is Peters here just as a winking television trope, the "recasting" of a long-lost brother, or is this the first baby step toward the X-Men being introduced into the wider MCU? That jives with Darcy's research into "cosmic microwave background radiation," which sounds awfully close to the origins of another Marvel property immigrating from the ruins of 20th Century Fox. Wanda insists that she did not conjure her dead brother in any form, which is a clear signal that she may have very little control over her seeming omnipotence, and she may be in subconscious search for unshakable allies after her showdown with Hayward and her sparring match with Vision. How much control will she have when eventually the stability of the Hex erodes, or SWORD attempts a full-scale invasion of her little town?