I continue to hold my position at around 45 to 48 pounds lost. And until otherwise noted, I think I'm done doing any serious lifting. I'm going to stick with  cardio and small weights on the off chance that I really did build muscle weight. As I go into November and get caught up in the National Novel Writing Month stuff, I still plan to hit the gym every day, but entries here might take a break temporarily to accommodate the new project. I recently read something about knowing when to rest so that you never actually quit, and I have a limit to how much output I can muster during a 55 hour work week.

It's been a strange week. I fall asleep a lot earlier anymore, and when I sleep I am a corpse. You couldn't wake me with dynamite. I'm at a crossroads where naps are as viable a way of spending my spare time as video games, podcasting, or watching all the TV that I try to keep up with. The nap has been winning out, and I don't regret it once.

I haven't regretted any food choices of late, either. I have slipped and allowed myself a bit of chocolate or a soda, but I guess you could just call that small indulgences against the threat of a big relapse. I have had the opportunity to pig out, and largely have been able to avoid it. Catered lunches at work, family cookouts, the recurring lazy drive thru dinner...the opportunities are there, but after having given myself a small treat, I'm not half as hungry and lacking in self-control as I would be otherwise.

I feel like I've slowed down, but I'm still here and still pedaling along. 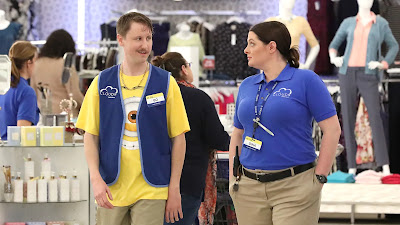 It's everything a workplace comedy needs for a sophomore season: some romantic entanglements, deepening of character personalities, expansion of personal struggles, broadening of comedic beats by a furious margin, and a couple of milestone events to really make you feel like a part of the little family. I took a real shine to "Superstore" as a kind of balm against my everyday cynicism. That's what sitcoms should be for, a gentle reminder of universal human experiences like embarrassment, exasperation, infatuation, and a communal bond. It really helps to take a break from current affairs and pretend like this day shift of associates at a faceless big-box chain have somehow become a weird familial unit to withstand the waking horrors.

Structurally, Season 2 commits to the long-term with any sitcom. This is where modest plans for characters start to take on an organic arc, and--from a business perspective--syndication becomes a target. Yeah, it's 21 episodes, which does feel a little overstuffed. While there are no total dud episodes, there are boilerplate filler B-plots that fall flat on occasion, and I don't quite know what the heck was up with that Olympics episode that aired in between seasons to coincide with the sports event itself. It takes place in the middle of Season 1, which would be just fine if that season hadn't ended dramatically with the entire premise of the show upended and all the characters save for Dina possibly unemployed. Weird choice, that.

America Ferrera doesn't get a whole lot of comedy moments in Season 2, but she does get to anchor the more cartoonish vibes of the season in her character's home problems, and provide a weariness and vulnerability to Amy. Without a doubt, if there is a star of the show it is her, and Amy is the character we know the best by the end of sweeps season, having met her parents, watched her marriage devolve from apathy to negligence to eventually some genuine pain, and see her grow as the unofficial leader of the staff. Ben Feldman, as Jonah, has been positioned opposite Ferrera and been given a broader goofball tone, honing in on a sort of nebbish hipster riff that fits the character's background and sets him apart from the rest of the cast.

As expected, Mark McKinney and Lauren Ash take their already outlandish management characters and get even bigger. McKinney's Glenn is more benign than a Michael Scott boss character, and usually his plots involve him trying to adjust his preconceived notions or maneuver around corporate policy in order to help a friend, more of a buffoonish Colonel Henry Blake type. Between that and McKinney's choice in a muppet voice, it's quite endearing. Ash, as the designated Dwight Shrute of this workplace, Dina, is tasked with a character destined to get more and more unreasonable, performatively oddball, and objectively terrible whenever a villain of convenience is required. She does all of this with a straight-faced conviction that calls to mind the unfairly forgotten work of Kristen Johnston on "3rd Rock From the Sun." Ash also tempers Dina's nonsense with a more protective, human element than Rainn Wilson's breakout character from "The Office," and that is quite appreciated. I do have to lament the rise of Dina, Glenn, and especially Mateo as characters most likely to exacerbate bad situations with momentary lapses in common sense. Every episode needs an Act 2, I realize that, but it's a bad writing structure that requires someone to always be holding an idiot-ball just in case.

The real standouts in Season 2, as the ensemble tightens and certain second-tier characters evolve into fan favorites, include Kaliko Kauahi as timid Sandra, who gets her own slice of intrigue in a side plot wherein she fakes an epic love affair with corporate stooge Jeff. Kauahi was effective in Season 1 with a sad-sack truth to her character's doormat behavior. It's quite the evolution to see this expanding lie give her the confidence to become someone a little more self-serving. John Miyahara and Linda Porter, through relatively small roles as the always silent Brett and the geriatric Myrtle, become extremely reliable for recurring sight gags, but also help to flesh out the show's approach to its setting. When you work in an office, there might be some homogeny of personalities, backgrounds, and age groups. At a retail superstore, the really is as diverse as a train full of strangers, and Myrtle and Brett are nice reminders that this conveniently photogenic batch of twenty-to-forty-somethings taking center stage are not the only folks putting on a smock every day in America.

Plotwise, Season 2 takes the more intriguing aspects of the show's abbreviated first run and extrapolates them to a more ridiculous degree. While Season 1 involved sharp jokes and plots about the Cloud 9 corporation's militant suppression of unionization, Season 2 softens this out to ongoing woes the St. Louis store endures from rebranding attempts, ineptly conceived mascots, and a series of ludicrously flat training videos whenever something crazy happens in the store. Eventually, Amy's marriage becomes an emotional crux of the season. Rather than a working mom trying to balance her own ambitions (like school) with the needs of a manchild husband and a teen daughter, her story zooms in a little and lingers on how little the marriage works anymore and whether it might continue. It's pretty true to life with a predictable entropy to the relationship being told to us in break room asides and the occasional tearful stockroom confession.

While Amy and Jonah seem on the brink of a Sam-and-Diane situation, and Mateo's secret relationship with Jeff gets some decent plot mileage, the more interesting pairings of the season end up being Dina and Garrett's purely physical arrangement, as well as perpetual punching bag Sandra's two romances, both the fake one with Jeff and the real one with Jerry. We also get some expansion on the favorite "Superstore" punchline characters, Bo and Cheyenne. Bo is an effective character to explain the humor of "Superstore." He's a big-box denizen incarnate: a midwestern white boy with a pedo-stache who never breaks the kayfaybe of his high-rolling gangsta rap persona. He's all at once too ridiculous to be real, and yet middle America is littered with losers just like him. While his brief tenure as an associate at the Cloud 9 made for a fun one-off episode, I was glad to see that there are no plans to elevate Bo from a great recurring character to a starring player. Johnny Pemberton is great as the character, but the character himself would be a bit too much week-to-week. Nichole Bloom already has the naive Instagram teen humor covered as Cheyenne, and freed from her pregnancy plot she's allowed a lot more energy and physical comedy, thank goodness. She's adorable.

And boy, what a wedding the two end up having! I asked my wife which television wedding contained the most cringe: Cheyenne and Bo, or Phyllis and Bob Vance from "The Office." And I think the extended lack of dignity and sustained garishness here wins out. Cheyenne and Bo getting married can be best visually described as the heavily tempered expectations of a fan of MTV's "Sweet Sixteen" lifestyle porn programs. It's delightfully trashy, and unapologetic, which is cute. But then Dina makes a mess of things, and in trying to defuse that Amy makes it a whole lot worse when her frequent projections on Cheyenne (as a sort of "second chance at life choices" avatar for Amy, who also married young and hired on at Cloud 9 to support a baby and a nincompoop) boil over into an endless and mortifying toast.

While Season 1 ends on a sort of bittersweet triumph of the entire store walking out in support of Glenn, Season 2's big finale is a special effects heavy epic catastrophe that physically destroys the Cloud 9 store and puts all our friendly associates through their worst fears and most desperate moments. A tornado is unexpected in its brutality, and I'm not sure what tone was intended when Amy and Jonah embrace in genuine terror while Brett serves as a simultaneous cartoon joke as he rounds up shopping carts in the middle of a monsoon. Both seasons end on what could easily function as a series finale, which makes me wonder how "on the bubble" of cancellation the show has been, but there is still plenty of plot to squeeze out of your friendly neighborhood shopping center, especially if the store has to be rebuilt and some of the desperate displays of emotion during the crisis have any lasting effect.

What can I say? It's a darn cute show. Some of the more inspired sharp edges have been sanded down to make it a more palatable half hour of harmless comedy, and that's fine. That's to be expected. It's solid comedy, and it's not without a certain level of daring, especially with the big finale moments. Solid recommend to brighten a day.

-"Black Friday is, like, the closest thing this country has to running with the bulls in Pamplona."

-You mean to tell me a man entered Cloud 9 just to buy an iced tea, and somehow lost his oversized cargo shorts containing marijuana roach, a can of dip, sexy escort flyers, and $900.00 in cash? Actually, the most outlandish part of that setup is probably the cash.

-“Is it a quick bathroom break or more of a hunker down, watch YouTube videos situation?”

-Much the same way "Office Olympics" brought out the creative, rascally, inclusive feelings in our favorite Dunder-Mifflin branch in that show's second season, Jonah and Garrett's rapidly evolving game of Muffin Ball succeeds in elevating the B-plot past a "boys will be boys" lark and make it a bonding experience that doesn't shun unlikely athletes like Mateo and Glenn.

-"This is your childhood bedroom? With not one, but...two, three...nope, six pictures of Scott Wolf."
"Yeah, I was a member of the Wolf Pack."

-The tornado in the season finale is actually hinted at a few episodes prior, when Glenn is interrupted from suggesting a long-overdue drill for the exact same situation.