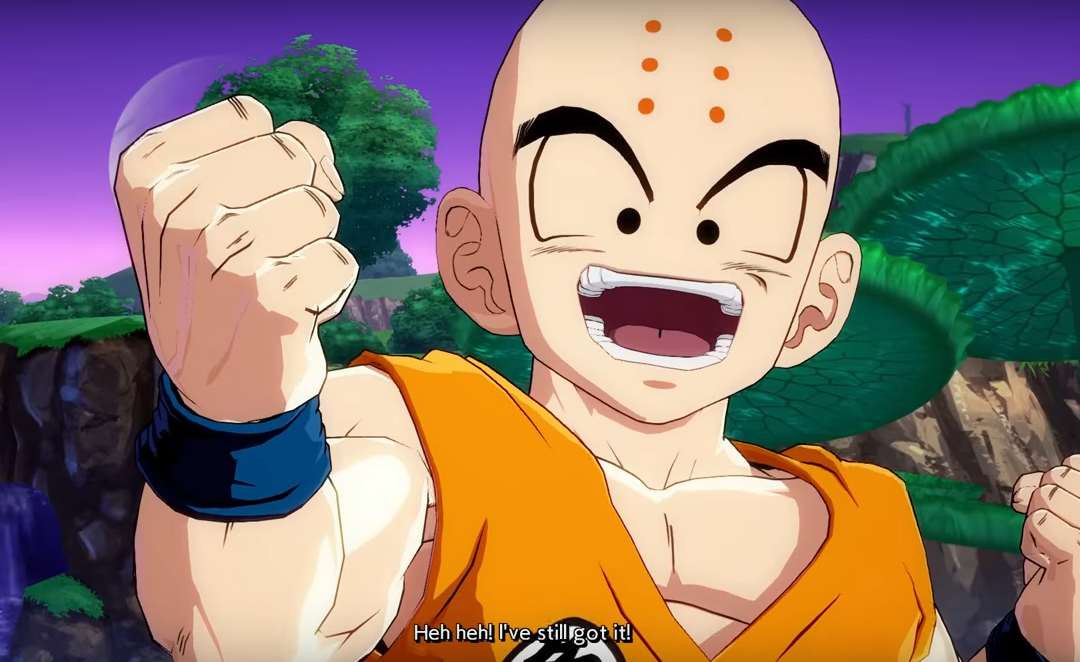 Session 2: The Story Begins
It’s only been a day but I’m itching to play Dragon Ball FighterZ again. Even though I decided to begin the story mode today, I couldn’t shake the desire to try at least one more combo challenge. The question though is, which character do I use? I could go in order, which would make Super Saiyan Vegeta the next up, but I sort of want to jump ahead to one of my other favorite characters, like Android 18 or Beerus. Badass cyborg or hilarious grumpy cat? Such a tough decision!

I can’t deny it, I’m a fan of both. I tried Android 18’s combo challenge and felt like I was doing quite well until I hit the 10th and final combo. No matter how hard I tried, I couldn’t replicate what was being asked of me. Even after watching the demo from the computer, I couldn’t figure out what it wanted me to do as it shows a combo going from down-Y to down-B to quarter-back-Y to a double-tap air dash, but the frustrating thing is I’m not being asked to jump first or dash on the ground but rather somehow do a move that doesn’t make any sense when I see the computer demo it. I switched to Beerus and got stuck half way through his combos as a super simple one for some reason just wouldn’t work for me. Frustrating is a common feeling for me in fighting games.

Enough playing around, it’s time for the Story Mode. I’m excited for this because I’ve seen a handful of fun interactions between characters in little clips online and look forward to seeing how the story itself plays out. The intro to the mode is both promising and confusing, displaying a series of seemingly unconnected snippets. Is it a montage of things to come? I...don’t get it, but I guess I’ll learn soon enough.

What I do get is the crazy butt rock music that has permeated every single Dragon Ball Z game since the dawn of time. It’s so weird to me that a series with two distinctly unique soundtracks (the original Japanese score which I’m not a fan of and the Faulconer score which I own in its entirety) is somehow represented by music that fits more in a Sonic Adventure game than here. Don’t get me wrong, I don’t hate it at all. It’s just a weird thing that DBZ games have.

Speaking of weird, Story Mode is...not at all what I expected it to be. Or hoped it would be. Or wanted it to be. It feels the need to concoct a reason for me the player to be inserted into this plot, which I don’t jive with. Things start in a place that just doesn’t work. Apparently Earth is under attack by clones of Z fighters, Frieza, and Cell, but the threat isn’t made obvious and immediate. We as the player wake up as Goku, but we’re not Goku. We’re a spirit inside of Goku? And Bulma is with us and trying to get answers but we’re mute? And then Android 16 shows up and has been rebuilt and is our enemy or...something?

This intro is just awful. After a LOT of slooooooow dialogue to say the simplest thing (you’re in Goku’s body, now fight), I finally get to start the first fight of the Story Mode against Android 16 and then nearly throw my controller. Remember how in the previous session I started the game doing the tutorial? Guess what’s mixed into all the early Story Mode fights.

I could just scream. Suddenly the odd matchups in the tutorial mode make slightly more sense as they’re all tied in to little story moments, but they’re still disjointed and pointless. Beerus and Wis show up to talk to Bulma and immediately point out that I, the player, am not Goku, and also that Goku is stuck in his own body. Beerus also refuses to do anything and as much as I wish I could just play the whole game as Beerus, I love that darn cat too much to be mad when he just peaces out to let Bulma deal with everything alone.

Allow me a minor diversion into what I liked about the Budokai games. I bought Budokai 1 and 2 on the GameCube when they were released and tore through them completely. I’m one of the few people who apparently adored Budokai 2, weird story mode and all, which is strange as FighterZ basically sets itself up with the same game board-like grid for actions. You have a small area and a limited number of moves in which to do everything you want. You have to defeat a boss to move on, but you can fight in other battles to raise your level and get money and items and YAWN! It’s so slow!

All of Story Mode is moving at the speed of digestion. You take a look at everything you want to eat, but once you take it in, it starts to very slowly move through you little by little, crawling along. OK, this analogy may not work perfectly, but Story Mode is crap so far, that’s the point I’m trying to make. I have indigestion and I’m sick of the way Story Mode is plodding along with dumb.

Once Bulma figures out how to make Goku speak and control his own body, he still for some reason can’t actually fight, so I have to fight using his body. Fine, that’s stupid, but fine. Then I rescue Krillin and he can’t fight either unless I switch bodies from Goku to Krillin and just, frick, why are they jumping through so many hoops to make this happen? Just...just let me play as the characters. If there’s some sort of big payoff at the end of this and it’s revealed that I’m playing as, I don’t know, Uub or something, fine, whatever, but I highly doubt we’ll be getting that.

I’ve made it to Chapter 4 of the story, which feels like Chapter 1 in that I’m doing super easy tutorial fights to slowly unlock characters. Next time I can rescue Tien and Yamcha, so come back then to see if things get any better!